Farewell
Tap-tap-tap: Blog news you can use 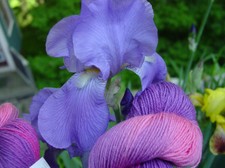 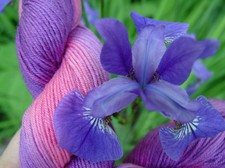 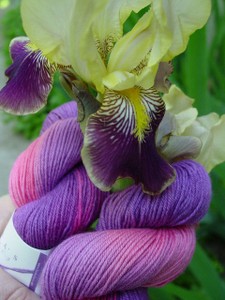 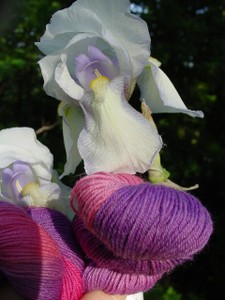 Ina sent this "Iris Garden" Lorna's Laces, the yarn that my Individuals won for me, basically, in the ABC-Along "I" Contest.  I thought I'd see how it looked with the other irises in the yard.  (Ina has a spectacular post about irises here.  Oh, I love that nearly-black variety!) 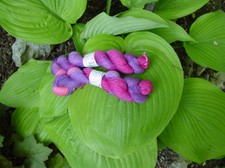 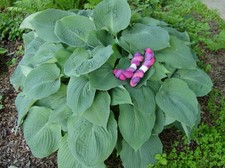 Then I wondered if I should add irises to the hosta gardens.  Oh, yeah!  Those are my two humongo varieties -- Sum & Substance on the left, Blue Angel on the right (I'm going to have to move the astilbe by those Blue Angels...). 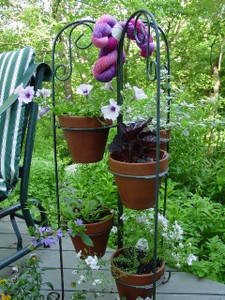 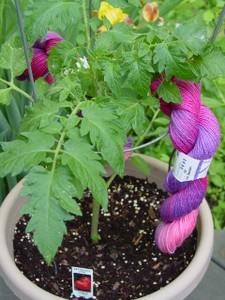 I also wondered how it might do on the deck... my folding, $5, rummage sale plant stand, or as an accompaniment to the Better Boy tomato.  I'll be doing a happy dance -- I'm sure you won't miss it -- when I sink my teeth into the first tomato I've ever grown!!

I think it could fit in anywhere!  Thank you again Ina for the great prize and Anne for your wonderful idea.

In other news...  As it turns out, Katie is not going to Maine for the summer.  She gave up the summer art counselor job for a number of reasons, not the least of which was the insane increase just in the cost to get there compared to last fall.  There are some things that are just beyond our control.  She's been working a pretty good-paying part-time temp job and has been looking for an additional job.  In something of a statement, she threw away her old Arby's clothes the other day, so going back there wasn't even an option, much less a temptation... or perhaps that would be a resignation.  She had an interview this afternoon and her experience at Arby's, specifically customer service and food prep, helped her land the job!!  None of us expected that she'd be offered the job on-the-spot, and at better pay that the temp job, too!  She'll be working in the natural foods department of a local grocery chain -- orientation is Monday.  ; )

And in other, other news:  My amazing brother took his written driving test yesterday and passed with ease.  It is a requirement in this state -- and I would hope in every other state -- that driver's tests be readministered following traumatic head injury.  After re-reading the book and studying, Michael thinks that everyone should be re-tested, as a good reminder more than anything, every five years or so.  He'll take the road test on Tuesday.

I am totally impressed with your brother's courage and inner strength. Hooray!!!

Oh! I love that yellow iris! Mine are just boring ole purple. And congrats to Michael, what fantastic news.

I forgot to say -- congrats to Katie, too. Although, if she had been in Maine, I could have gone to visit her. ;-)

Good for Katie! Your yarn is gorgeous; you know that to be when they are blending in so well with your lovely garden.

Your brother is amazing...absolutely amazing!

congrats to Katie!! and you too - all that great produce she'll be bringing home!!

ps. the yarn and flowers are lovely

Sounds like congrats are in order all round - so lots and lots of them! Nothing wrong with boring ole purple irises IMHO (they're so rich-looking), but yours really are spectacular, and the yarn is just beautiful. Wish I could grow Hostas too, but every time I've tried, the slugs get them - and there's nothing more off-putting than a hole-y Hosta ;)

That is gorgeous yarn.
Way to go, Michael.

Just...breathtaking, the yarn, that is!

Congratulations to everyone! I really love all of these garden pictures - especially your irises. I got a nearly black "Hello Darkness" iris last year but it hasn't bloomed for me yet this year.

Dang! That yarn looks fantastic no matter WHERE you put it! Hope you have something fun to knit up in mind. :)