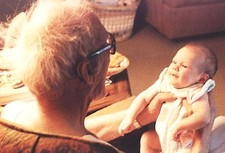 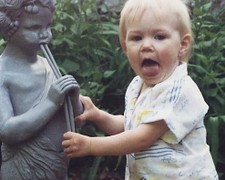 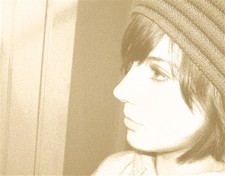 The youngest of my three girls and the last one alphabetically.  Her great grandpa was one of the first to coax a smile from her -- he always had a way with the babies!  I always joke that the Pan statue in the back garden is my only son -- he always played nice with Maddy, though didn't want to share the pipes so much.  Once, Maddy and one of the neighbor boys pulled off those plastic "pipes" and tossed them in the ravine, never to be found.  DH fashioned some gorgeous copper pipes to replace them and they're prettier than the originals -- sometimes the kids' shenanigans results in good.  ; )  She's getting measured at the door frame, just before it was removed for a kitchen expansion; and outfitted in Lion King gear for her first day of preschool.  I swear, we kept the Disney store in business for years -- she's wearing a Belle shirt (possibly an Ali hand-me-down) in BOTH of the bottom left photos -- it was right after my kids' fashion sensibilities changed with adolescence that the store at our mall closed.  I swear.  The final photo is one she recently took of herself.

You'll notice that my first two girls have undeniably red hair and that Maddy's is decidedly different.  It's exactly as mine was, actually... nearly pure white as a toddler after starting out quite dark (though Mom really can't remember whether mine was dark at first), getting a little darker each winter as she got older, but lightening up again in the sun every summer.  Mom used to squeeze lemon juice into my hair to keep it light; I remember an egg treatment, mayonnaise, and beer over the years, too, all for different reasons, I'm sure.  Anyway, Maddy has been experimenting with color in her hair for the past year or two and she's currently brunette.  I've always been okay with that... I'd rather they experiment with hair dye -- and they often show some originality, doing more than just applying it whole-head -- than drugs or other stuff.  Dye on, darlin'.

She is growing up quickly and really blossoming. I love how much she looks like you in the picture with the backpack!

Beautiful! And I agree with Lauren - that backpack picture is ALL YOU!

M is for magnificent Madeline!!

btw - what hat is she wearing in that bottom right hand pic?

Man - you sure do grow some beautiful girls over there!!

Look at that blond hair! So pretty. I really like the picture Maddy took. The perspective and sepia type coloring is great.

I must say Vicki that you have three beautiful daughters; not just physically but also in spirit, character and personality.

Gorgeous girl. All of your daughters are so lovely.

I'm with ya on the dyeing the hair. I like that so much better than tattoos.

What a lovely girl. I know what you mean about the dye because I feel the same way. My oldest( who naturally has a reddish auburn color) has been white blonde, black, bright red, pink, green and turquoise.No matter what I love him and it sure beats tattoos and piercings.