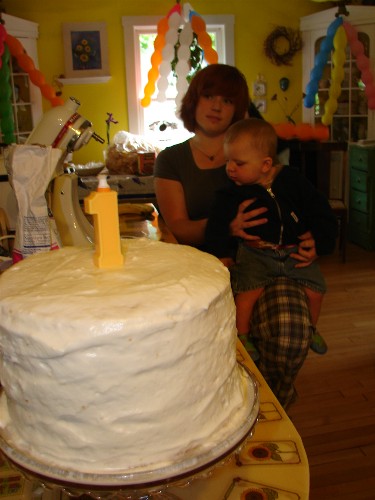 Alison had the honor of baking Mack's first birthday cake -- a Martha Stewart lemon confection.  In the fashion of "too many cooks," it was deemed that the recipe should be doubled in order to end up with the desired double-layer cake, so the recipe was doubled... and we ended up with a triple-layer cake and an extra 9x13 (which was excellent for taste-testing and also for dunking in the failed icing of which you will read about below, but not so good for you-know-who who has WW tonight) (not to mention the accompanying full sheet cake for big brother's simultaneous high school graduation party) (oh, my thighs)!  The first attempt at "frosting" with icing was not good -- it was thin.  What it did do was prime the exterior of the 3-layer cake and infuse it real good with extra sugar.  The words "frosting mix" were bandied about (mostly by the disgruntled and disheartened baker) on the walk to the store for more powdered sugar, but Mack's first cake -- a Martha Stewart cake, no less -- could not have frosting from a box or a can.  It was yummy!! 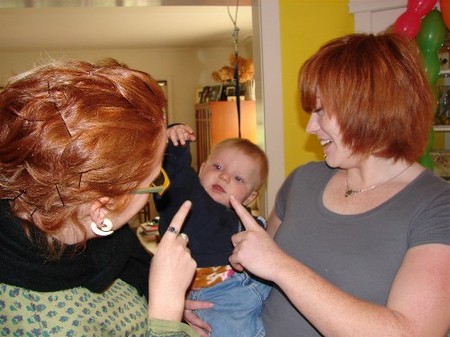 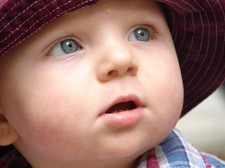 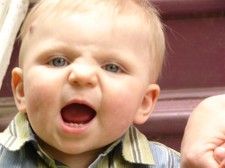 I can hardly believe it's been a year.

I can't believe it either! He's still just as gorgeous as ever, too. Happy Birthday, little dude.

Look how freaking cute!!! We spent lots of time with my nephew this weekend - can you believe how old they are already. Thankfully though they're still babes. But not for long. Sigh.

What a doll! Happy b-day Mack!

Happy Birthday Mack!! And the cake looks yummy too.

Yup. That year zipped right by me.

Happy Birthday to Mack and Congrats to your other nephew on his graduation!

you sure have a bunch of good looking people in your family Vicki!

Get that cake out of my sight THIS INSTANT!

I don't like the new secret code you have in your comments! *(running and ducking)*

Believe it? Nor can I. The bottom right picture is just *perfect* for the current soccer World Cup, though. All he needs is a team colours scarf/shirt to go with it... ;)

Happy Birthdy Mack! What a cutie-pie!!!

Happy Birthday, Mack. Looks like a fun party and a delicious looking cake.

He's so cute! What a great personality-I can already see it in his pictures. Happy 1st Birthday, Mack!

How totally cute! What a fun event and worthy of a cake occasion, WW be damned.

I'm not sure who's yummier - the cake or the babe. He has quite a gleem in his eye; he really is adorable!