Rockin' down the highway 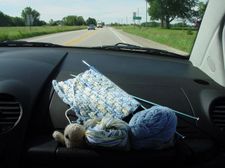 I got to ride shotgun with Oddfellow on Saturday morning's drive to Madison.  Isn't he an adorable driving companion?  He appreciates the knitting, too.  I can tell.  It was like Old Home Week -- Wool rubbing elbows with Cousin Cotton.  Another Mason-Dixon dishrag, finished off, fittingly, in my sister's kitchen.  All the dishrags were dispersed and I fought off the compulsion to photograph the first of them actually being used -- wet and wrung out in the sink -- believe me, it was hard.  I was bursting at the seams with pride, having created something both delightful and useful, and that matched the kitchen so well!

Notice that handy yarn holder that comes standard in the Beetle?

Remember these photos of Katie from the recent "K" installment of the ABC-Along?  I looked like the one on the left yesterday, while Katie was a lot more like the one on the right.  I was supposed to clean out -- or at least start cleaning out -- the laundry room.  Our main computer area has been in Katie's room for the past year or so, while she was an on-again/off-again/permanent-yet-part-time resident at home.  Now she's going to be here for a while and she wants her room back -- and that's fine, but the computer area needs a new home.

The laundry room was the first room in our house to get our attention -- 19 years ago.  A few months passed between the time we bought the house and actually moved in, during which time the previous owners rented and as renters, apparently, they didn't care what their dog did while barricaded in the laundry room all day, everyday.  We had no choice but to immediately rip out the urine-soaked carpet and subfloor and replace it -- and as long as we were doing that, we built in a windowseat/bookshelf/storage thing, hung some upper cabinets over the appliances, and wallpapered with material that had been left behind.  The main purpose of the laundry room has never waivered, of course, but it's a fairly large room and so was also a "craft room" for a while (complete with comfy, upholstered chair), genealogy central, and computer area, but the secondary purpose has been a long, steady descent into "storage."  It's not the neat, organized kind of storage, either; for the most part, it's the "I don't know what to do with this," holding area type of storage, but I never get back to it.

Overwhelming.  To say the least.

I was pretty much looking like that photo on the left, "Lalalalalalalalalala," when Katie came home from work at 2:00 and gave me "the look."  Then she offered to help and took charge a little bit, making me look at all the little jobs rather than The BIG Picture, which was obviously not working for me.  She's quite the task-master!!

We took a break to run to the store for salmon to accompany the artichokes that we were going to have for supper, but we were starving and realized, upon our return, that we had NO energy for moving all the stuff in the kitchen staging/sorting area that had previously been in the laundry room -- and then prepping and cooking -- so we went out!  Salmon and artichokes tonight! Recharged, we worked 'til almost 9:00!  I have a big box of stuff to give away or sell, a big box of stuff to keep (sort through and find a place for -- or change my mind and put it in that other box), and a big bag that went out to the trash and another for paper recycling.  There's a lot more to do, some rearranging and figuring out furnishings, but it's a HUGE start.  There's even a bit of an echo in the room.  ; )

I feel your pain. I am still going through my basement, sorting sorting sorting.
I love "the Look" My daughter has a powerful one, too. Like butter wouldn't melt in her mouth.

At least you have a helper - and think how good it will feel when it's all done. Fresh, clean, cathartic (sp?) and .. well.. DONE! Enjoy the salmon and artichokes (my favorite!)

Vicki! You won't believe it! I was at TNNA (yarn market) this weekend and attended the Fashion Show. I commented to my staff, Jane, that I was starved (I didn't get a chance to eat all day) The lady to my right started rummaging through her bag an pulled out a bag of peanuts and insisted that I eat them. I was so grateful and we started chatting and guess who she was? The lady from www.knitorioius.com!!! I told her our connection and we had a little "oh my god" moment. She says "Hi"

how nice for daughters taking charge! I will look forward to some pics of the newly organized laundry room with cool storage unit and cabinets ....

Congrats on the dishrag; be proud! It never fails to amaze me what shits some people can be just because they are renting - geez. Your room sounds large - I love it! Ed would love that kind of space for laundry. It is so awesome to have someone else help with the organizing; they have less investment and attachment and can just move through with way less feeling. I bet you feel lighter after the clean up - good for you guys!

YOU HAVE TO COME OUT! Yesterday was perfect - seriously - all it was missing was you! L, C