Is Yahoo messed up today?  I can't access email or nothin'!

You guessed it, no knitting today.  No gardening, either.  I'm still cleaning and organizing and trying to arrange -- too many big pieces in too small a room with few options.  You know, built-ins look great but they are BUILT IN and won't budge.  Argh.  I'm having problems with visualization, too, I guess.  Last night, I moved a loaded, gigantic four-drawer file cabinet -- one of those horizontal kind -- with all the stuff still on top of it -- across the room and then back because it didn't work out.  Then I walked the dog, took out the trash, and the recycling, and then it was time to get Katie, and since she works at a grocery store, I picked up a few things, and then I watched 15 minutes of TV, and it was time for bed.  The good news:  Down 2.8, for a total loss of 5.2, which I saw before at Week 4 and it's now Week 13, but whatever.  Yay, the waistband on these pants feels a littel better today! 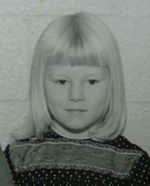 I had a picture of my grandpa holding Maddy the other day -- this is my other grandpa (maternal) holding me.  I was in first grade (see picture at right) when he died at age 58, so he didn't even hold some of his own grandchildren, never mind great-grandchildren.  My paternal grandpa died only a few years ago, so made acquaintance with all of the great grandkids so far except for Mack.

This grandpa used to eat his Cheerios with honey instead of sugar and I think of him and his favorite breakfast every time I get a whiff of honey.  He also had a toaster that shot the toast straight into the air -- and he was pretty good at catching it right on the plate.  He was really, really nice.

Grandma didn't mind my playing with her strawberry-blonde hair and she kept her bobby pins in the bathroom in a covered glass dish that was shaped like a duck.  It turns out that the duck originally held bubble bath and was a Mother's Day gift from my mom. I came across one in a box lot at an auction several years ago, which, of course, became mine, and it now holds bobby pins (which I never, ever use, but that's what this dish is for) on a shelf in my bathroom.  My mom eventually found one for herself, too, and hers even has the small metal scoop tied 'round the neck with ribbon (which, of course, she washed and pressed because her mother is the one with the cleaning of the attic rafters and some of that stuff just rubs off).

Did you see:  Justin's Blanket?  Cynthia's still collecting squares -- of any color -- the goal is 20 blankets.  Sweet.

congrats on the successful WW week!! (wish I could say the same). Love the story and pic of Grandpa - he looks like one of my great uncles ......

HOW FREAKING CUTE ARE YOU!?!

Yes, it was a Yahoo thing but it seems to be behaving now.

All that heavy lifting must be helping with the weight loss; don't hurt your back though. I am loving all the family pictures you have been posting as well as the stories.

You look like Jodie Foster in that photo!! Granpa sounds as sweet as the honey on his Cheerios. My bobby pins (which are only used at dance recital time) are in a heart shaped crystal dish - just like my two sisters!!

Way to go with the WW! It seems to get harder and slower to lose the weight the older we get, huh? I know now that youre 28 its harder than when you were 21, right? LOL!!!! I'm trying to do WW at home and walk with my dog at least 4 days a week. So far my pants have gotten a bit looser but I'm still too scared to step on the scale. I'm almost ready to go down a size but not quite yet...Proud of you!