Is it me?
Meet me at the zoo

"Your case is a bit unusual...

...and we're working on it," according to my second Typepad help ticket email notification (which I am receiving, loud and clear).  Unusual because I'm receiving some (7 of the 11 to date on the last post) but not all (2 of the 10 on the previous post).  Yeah.  I'm not the only one and it doesn't appear to be related to Yahoo so much.  We'll see. I have no gripes with Typepad's help ticket system -- I've only needed to use it a few times and it's been great.  It's a good way to practice patience.  I need to practice patience these days.  I'm trying Victoria's suggestion to turn off notification and then turn it back on.  La, lala, lala. 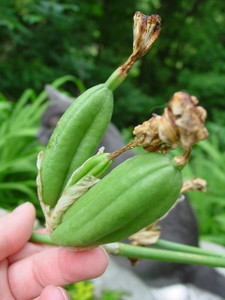 Let's see, I'll call this picture Iris Seeds and Scamp.  I guess I usually snap off the spent iris flowers before they get this far, so I am kind of amazed.  This is way in the back and I just haven't been down there as much this year... actually, since I quit smoking.  I used to go down here numerous times a day and then often get caught up in the weed-pulling and dead-heading and tidying, etc.  Now, the bleeding heart and bloodroot have obliterated the garden path; thankfully, I prepped really well when this was first planted, so the weeds aren't a huge problem.  They're a huge problem in the front garden, which I see on a daily basis and still manage to ignore, but that's another story.

I don't know what's wrong with me.  Well, yes I do... there are a lot of things going on in my life and in the lives of people around me -- some close, some far.  There have been big, huge, monumental changes in the dynamic of some of the people in my life and a lot of frustration dealing with people problems.  And the kids are changing gears again -- Katie has applied, last-minute, for fall semester rather than spring because, surprisingly, she can't stand her new job/mostly new boss (who is a friend of a friend and, yeah, so, ICK) and she hates it so much that she is looking for a new job and had a promising interview (actually two) yesterday and, well, let's just cross our fingers for her.  It's no fun when your daughter cries because she's so unhappy with a stupid part-time job.  And Alison!  She, too, has applied for fall semester -- at a different yet still nearby school, and is actually thinking about living in a dorm.  I'm happy and all that, but not quite sure what's brought about the sudden change.

I really am overwhelmed, too, by all the stuff that's been displaced and the task of sorting, organizing, tossing... dealing.  DH moved a few things to the queue yesterday and it just about put me over the edge.  I am angry with myself for letting it get this bad.  No... I'm more angry for not paying attention.  Maybe my house is too big.  The days are too short.  Really.  I need to practice patience here, too, and realize that it didn't all pile up in a day, so it's going to take some time to deal with it.  Eventually it will be over.  The kids will find their way -- I know they will.  I'll be happy, they'll be happy.  I will knit again.  Deep breaths.  Small bites, don't worry about the big picture.  You can only do what you can do.

I went through one of two old boxes of cards and letters last night (from back in the olden days, before email), a few pictures, report cards (mine) -- wow, Grandpa really sent me a lot of postcards! -- I mostly sorted, but did toss some stuff.  Maybe the other box tonight... while I talk long-distance for cheap on my new cable phone!

Tomorrow, I'm goin' to the zoo with my favorite one-year-old nephew.  I'm gonna show him the giraffes.

If you want to call me long distance, go ahead! I'd love to talk to you.
Have fun at the zoo!

I so know where you are, my friend. There are so many things I want to be doing and I need to be doing and my house is an absolute mess and I can't get it together at all and I would rather be doing 8 million other things and stuff keeps breaking and I hate summer and it's hot and I'm fat and and and.... I'm right there with you. Take a deep breath and do one thing each day. That's what I'm trying to do!

Sorry you're feeling so overwhelmed by life right now. I hate trying to organize, 'cause, like you, I wonder how I let things get so bad in the first place.

You're right, the girls will be happy again, and you will knit again soon enough.

Have fun at the zoo with your nephew! He'll love the giraffes.

Well, guess whaaaaaaaaat. Today I received 16 out of 21 of my email notifications. I would not have known had I not gone and checked my comments. So "unusual"? Maybe, maybe not!

Hugs to you m'dear. And I say you call me BEFORE you call EITHER Ann or Cara! I've been to Wisconsin.

Your case is NOT unusual...I've been having the same problem for three days. Typepad's pretty good about getting things straightened out, though. I really don't have any complaints with them.
Gosh, your post about *everything* came at the perfect time...now I don't have to write it. I'll just add *Me, too!!* Is there a full moon or something?

I hope things get better for you soon. It sucks when you can't knit! :-)

I can certainly relate to your sense of frustration; it feels like the house morphs around me without my noticing till things are out of control. I have had a tough year too, and keep patiently waiting for change, but reminding myself to be proactive at the same time. Think of the good progress you have made!