N is for...
Slapdash 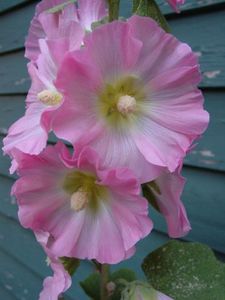 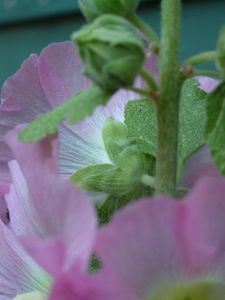 Holly-HOOEY!  Dang, we've already done H!  My hydrangeas are doing so nicely this year, too! 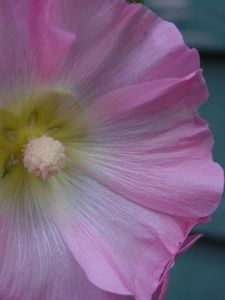 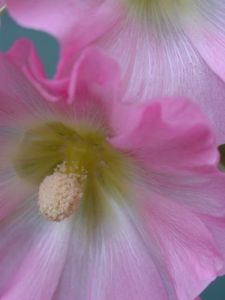 I think I was ripped off in the hollyhock department last year, but am very pleased with this year's display.  I know they're biennial...  I need to synchronize so I have a good year every year, you know? 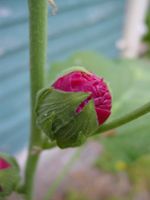 So far, I've got a pale pink and a white blooming, and this one (coming up right in the middle of some other plant) looks promising, a darker pink.  Mom complained that she's got nothing but the very, very dark ones blooming this year and she doesn't like it.  I just bought a packet of seeds in that color because I do!  Go figure.

Who'd have guessed that nighties would get such a reaction?!  It's not like I was airin' my dirty laundry!!

Have I mentioned lately how much I love the ABC-Along?  The minute Anne suggested it, I was in.  I might be tardy with a post on occasion, and I might put up a little complaint about how the difficulty of a particular letter, but I have taken the ABCs to heart this year and, truly, try to make each post/letter a reflection of me.  Hence, nightgowns -- on the clothesline, no less.  When it finally occurred to me that nightgown was going to be my N, I was giddy with excitement -- how to shoot, when, where...  It was a labor of love to gather them all together from drawers, baskets and hooks, haul them all downstairs, pin each one on the line...  I renewed acquaintance with some old forgotten ones, some that need mending, some that I just can't part with (even if they might not fit at the moment).  I think I overlooked only one altogether.  My delight in the project even allowed me to momentarily overcome my fear of heights as I crawled out of the sleeping porch window onto the back porch roof in order to take the "aerial" shots.  And then, because I was already there -- and I could (it might have been the rarefied air) -- I walked around to the other end of the porch and took a couple of pictures of the garden from there -- it's a walk-out basement on that side, so another story up (or down, depending on whether you're a cup half-full or -empty type of person), but I did it!  Believe me, I never got too close to the edge and was even down on hands and knees at times.  I get so lightheaded and woozy even at the thought of being up high sometimes that I feel like I'll just lose all function and control and just collapse. Thankfully, not the case that day -- way back in May!  I've been so excited, waiting patiently for N's time to come.  I'm so pleased.  The comments (Ann, yours is going to tickle my funny bone for a long time to come!) are priceless.  Thanks for taking the time to share them with me.

At right, a preview of what's on tap tomorrow... KNITTING!

You're throwing us a big curve-ball by getting the letters all out of order! Geesh, I have a hard enough time concentrating -- don't mess with my brain!

How beautiful! I haven't had much luck with Hollyhocks in my garden. I'm still trying but so far no luck.

Very pretty flowers... I can't wait to see what you have in store for N. Hollyhocks are a favorite of mine!

We had hydrangeas on the altar for our wedding. Very prety.

I'm still giggling over Ann's comment, too. Laundry day at the convent. Hee.

I love your garden pictures, the Hollyhocks are fabulous. I love your N laundry pictures, thanks for overcoming your fear of heights for our entertainment.

Hey, hey now...let's not be hooeying the Hollies here! :-) Hollyhocks are my absolute favorite and your's are just lovely. I certainly have been enjoying your ABC participation!