Look at my baby 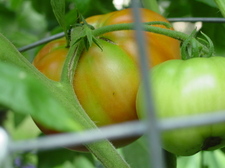 My baby tomato is almost all grown up!  It was just a little over a month ago that I spotted it, brand new on the vine, and yesterday I was thrilled to notice through the kitchen window that it was starting to turn RED!  This is the "Better Boy" variety and, I have to say, compared to the other pot that has "Big Boy," this one is definitely better -- a lot more fruit!  I can't tell you how excited I am that I'll soon be harvesting my first home-grown tomatoes.

I will have a nice, long stretch of time off around the Labor Day weekend, and DH and I are planning to (finally) build the loggia over the patio/deck -- and I'm getting excited.  The plans include built-in seating and planters.  Originally, the planters were going to be for things like pansies, petunias and morning glories, but now I'm thinking more along the lines of tomatoes, peppers and green beans!

I missed my WW weigh-in last week, so was kind of looking forward to this week.  I've not been particularly good, but not very bad, either -- I tried to keep a balance.  The mushroom & swiss burger I had at the diner last weekend meant a big ol' salad for supper on another night.  That burger was so good, I still salivate when I think about it (so worth it)!  I hardly felt deprived when I made my salad with organic greens, tomtoes, mushrooms, a good salad dressing -- there was such a wonderful, colorful variety of greens and they looked so good (seriously, a container is so much better than a bag).  Yum.  So, anyway, all the give-and-take resulted in another 2.4-pound loss (over two weeks) and I'm only about a half-pound from a total of 10.  That's a milestone I wouldn't mind passing by.  ; )

I finally located all my Sugar & Cream cotton last night, right under my nose, but not until after I looked in all sorts of drawers and bins and bags.  Sheesh, sometimes I wonder why I bother with trying to organize.  It's all going right back into the bag from Three Dog Designs, from whence it came during the organizing, so I can take it with me to my sister's this weekend, anyway.  I've begun to Log Cabin in a very random way -- perfect for road-trippin'.  Taking a cue from my very good friend (and because it's one of my favorite songs ever), Let the Good Times Roll!

Hope you have a good trip!

Have a safe trip V :) Congrats on the 'mato too
Definitely try some peppers next year. I used to do them every year in pots on my patio and had very good results our last summer in Madison (haven't done them since we moved to NY, just havent been in a green thumb sort of mood) Our annaheims did especially well in pots, but so did our seranos.

Congrats on the 2.4lbs and the tomatios (that's what my neice calls them hehe)

I have lots of tomatoes on the vine but they're all still as green as the Wicked Witch of the West.
Glad you found the cotton!

That "Better Boy" has me salivating for fried green tomatoes - yummy! When I was growing up, no matter what part of the country we lived in, my dad always grew tomotoes. I really miss having fresh garden grown produce. Nothing grows up here in the mtns at my elevation (9,035) and even if it did, the wild critters would eat it.

Great job on your WW weigh in. I quit going last spring when I hit a plateau. I was two pounds away from hitting the high end of what WW says you should weigh. I've gained five because I quit so DON'T QUIT! A couple weeks ago I pulled out my 12-week Tracker and started counting points again. Good for you!

Thanks for the plug, Vicki! Have a good visit with your sister.

CONGRATS on the almost 10 pounds. That is alot! I do believe it is the give and take that WE have to do for the rest of our lives. Not just the TAKE. :)
My mouth is watering for your tomato.
xo

Hurray on your fat cell shrinkage! Mine just laughs at me, apparently it is not afraid of my idle threats anymore. :)

Nothing is as sweet as that first tomato from the garden, but I honestly can't look at another one. I have enough lycopene in me to last for the year.

We are in NoVA and somehow I was able to cheat Jack Frost when I planted my tomatoes in early April and now we are giving those puppies away. On top of what I planted this year, now I have last year's dropped tomatoes (thanks to the birds) reseeding themselves! I believe I will accumulate enough to can this year. Good luck with yours! How do you keep the bugs away?

I am having tomato envy, as deer bit off all the flowers a few weeks back; going to have to get a dog or two again. You are one of my weight loss role models right now, as I crack down on the "extras" that have slipped back in and the ten pounds as well, what with all the stress this spring, but sliding on the down side again, with a 2.0 loss.

I also have joined weight watchers--but took off a month to go to Barcelona and Paris where I had treats everyday--eventhough I didn't eat big meals. Plus, I walked all day. I thought for sure that I would have lost weight--no such luck. I gained .6 pounds! Oh well, I'm back counting points and feel very, very deprived.

Yea for your weight loss!!! And the salad sounds yummy. I'm trying to get re-motivated to lose 1 pound a week for the next 12 weeks --oy!!!

What a pretty house!