It's my life
*gasp* It's all about knitting

To everything there is a purpose... or a repurpose

By the time I got around to thinking about blogging yesterday, it was too late.  I tried to sign on twice without success, so moved on to other things... 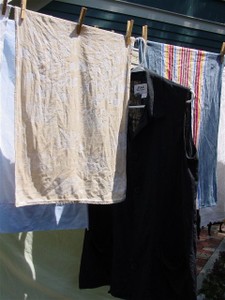 ...like taking more photos of stuff on the clothesline!  I'm making much better use of the line this year.  ; )  These are two items -- a dishtowel and a sleeveless linen top -- that were originally something else.

The dishtowel is one of three that I have, and my sisters each have (or had) three of the same.  The original purpose of the fabric was as a tablecloth.  It was worn in spots and had a few stains and wasn't very pretty as a tablecloth anymore (or if ever, but that's debatable), but there was still a lot of life in most of the fabric -- and because it was a tablecloth, there was pretty good amount of it. We saw potential in the cotton/linen when it was purchased at a city-wide rummage sale in Kansas during a "Sister Weekend" when one of the aforementioned sisters still lived there.  We cut it up -- that and one other, I believe -- and hemmed it, and voila! something new. I had one on the line recently when a sister was here and she said, "You still have those?"  (See, even a lowly dishtowel-once-tablecloth can have a story and shared memories attached -- is it any wonder that I have a houseful of stuff?)

The sleeveless linen top originally hung from the hanger as a long-sleeved linen smock -- in a very unflattering XL or maybe even XXL.  It was a hand-me-down from Mom and I never quite understood how it looked so much better on a smaller her than a bit larger me.  It was quite similar in length and overall cut to a sleeveless linen top that I already owned and so, one day, I laid the purchased top atop the smock top and whacked off the sleeves along a similar line, then finished off the edges (none too neatly, I might add) with the sewing machine.  I have to say, it's one of my favorites this summer.  It has pockets!  (I just yanked off a button, though, and I'm not so good at getting to the mending)!

Katie recently took two vintage tablecloths I had no real purpose for and used one as a curtain on her closet door (looks great with the new, but vintage-looking window curtains she just bought).  She cut the other i two and made a skirt from the larger piece and a little hip-wrap thingy from the other.

Maddy took a few old LPs (ohmygod, we have more than few of those -- but also a turntable on which to play them and we do... sometimes) and brightly painted them on one side, affixed some artwork to the center and hung them on the wall in her room.

I can't think of anything specific at the moment, but I'm sure Alison has done something recently that's equally as clever, resourceful, and re-purposeful.

Seeing potential, or the potential for potential, or the promise of potential... well, these things also figure into the "houseful."  Every once in a while -- like now -- I just have to be ruthless and know that I might one day (maybe tomorrow, maybe next week) regret it but still just throw away the sorted, nested, neatly stacked drawerful of cottage cheese/margarine/whipped topping containers... and the lids... and the like. 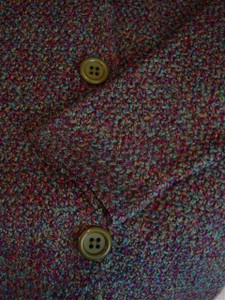 When I came downstairs the other day with a shawl to frog, it wasn't what I'd intended to get when I went upstairs.  I must admit that I was entertaining thoughts about tearing apart a sweater that my husband recently gave me.  It's an okay sweater -- the cut's okay, the color's okay, the buttons are fun -- but I'm not really sure I'll wear it much because the sheepish look on DH's face when he gave it to me is about as close to WOOL (or anything natural) as that sweater gets.  It's not that I won't wear acrylic, it's that I pretty much can't.  You may as well wrap me in an electric blanket, turn it on HI, and then put me in a sauna.  How many admittedly soft-as-a-baby-butt robes has he bought me that I put on at the closet in our bedroom and tear off before I even hit the bottom step?  I end up rummaging them or thrifting them -- another one hit the box yesterday.  He was being sweet, thinking that perhaps I'd like a sweater ready-made for a change, but I'm going to have to reiterate that the fiber content label is the most important one.

Anyway, I dashed upstairs with a hank of yarn to check color coordination with the gift sweater and it just wasn't right.  Then I started to think about the other knitted items in my closet and drawers and that's when I came up with the close-but-not-perfect shawl -- the color was perfect and I decided to put that yarn to better use.  I have frogged and reclaimed yarn from knits before, but only if it was something I knit myself.  I have purchased sweaters with a thought for reclaiming, but have never done so.  I will un-make entire sweaters I've knit with my own two hands in order to not "waste" the money/yarn, but I will not un-make entire got-for-a-song sweaters in order to "save" money/yarn.  I guess, to me, the gamble is too great -- not knowing what you're actually going to end up with and frogging and skeining an entire sweater is hard work!  So far, the gift sweater's still intact and, I discovered yesterday, so it will remain -- the fabric has been cut and sewn and the yarn cannot be reclaimed.

I wondered about it being sewn together when you told me about it. They do that often with acrylic knits. Love the way you have reclaimed the linens. I love kitchen towels (no papter towels for me) and will do the same with some old table clothes. Thanks for the idea!

Can you re-gift the sweater?

I, too, have a housefull of items with a)a story and shared memories attached, or b) potential, or the potential for potential, or the promise of potential. Mr. Celia is constantly "simplify" things and shed, shed, shed, which is probably good or our house would be scarily crammed from floor to ceiling. I think I'll look for a repurpose project for this weekend...something small but satisfying.

Dang! Misspelled my own name!

Thanks for linking to me...I'm having fun looking around your blog.

I agree that seeing potential is a curse and a blessing. You may end up with a houseful of stuff, but you have an endless supply of creative tools at your fingertips!