Foxfire
Before and after 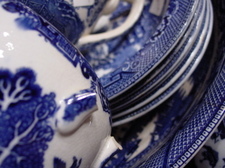 A box of chipped and broken Blue Willow china for $10.  Several cups, saucers, different sizes of plates, an oval dish, a creamer, a large sugar (or small biscuit) with broken off handles, a mix of Japanese and English marks -- I'm not sure what that little slip of red near the mark on the second small photo means, but it's also on other, similarly marked pieces.  (I should probably know these things.)  The "Occupied Japan" cup and saucer at right is one of my own from Grandma.  I have a cousin who lives in Milwaukee -- she is also a knitter, and she is also a mosaic-er, and if I hadn't bought that box, I know my aunt probably would have.  I'll give a large plate to Mom for her garden border, will use a small plate for my own border around the deck, and I'd really like to get together with my cousin -- it would be fun to make a gift of a broken dishes to her, spreading the cracked-and-chipped dish wealth. If I were growing a money tree instead of tomato plants (or if I hadn't had huge car repair bills in the last month, didn't have college tuition, housing, textbooks looming, and upcoming driver's ed fees, yaddayadda-and-etc.), I would not have thought twice about whether to make this mine.  I could not stop looking at it -- a white, knit bedspread with two matching pillow covers.  The texture of the leaves and borders and ruffles -- OMG, the ruffles!  Honestly, I couldn't even open it up all the way -- I know I would not have been able to resist.  I took some secret pictures, instead.  I played around with the photos a little bit, trying to make the stitches pop to match the way my eyes popped...  Oh, so incredibly beautiful in person.  This had to have been knit for someone's trousseau, don't you think -- by a grandmother for her only granddaughter, perhaps, or an aunt for a favorite niece?

Gorgeous! See I wouldn't have taken pictures. I'd have wanted it out of my mind as soon as possible. ;-)

I used to save dishes when I broke them in hopes of one day doing something mosaicy. I think I threw them all away though. I never did do a mosaic. Great find!

All I can appreciate right now (okay I appreciate other things about it too, but this is #1) is the TIME it must've taken to knit a full set of bedding. There must've been a lot of love in those hand knits.

Oh, wow, wow, such great finds. How much were they asking for that bedspread set, just out of curiosity?

What a breathtaking find. Think of the love that went into each stitch. Thank you for sharing it with us. Our craft is timeless.

I have a pattern book for these knitted coverlets that I got about a decade ago, after seeing an article about them in Victoria magazine, and am just awed that you actually found one in such good condition; did it smell like a cedar chest?

My m-i-l had one of these, similar anyway, apparently from her grandmother. I took it rather than letting it be thrown out, but it needs repair and other care. It was very yellowed by cigarette smoke, and now I've turned the responsibility over to my sil, her daughter. As you point out, such work. How can I let it be thrown out? Your photos show an even more beautiful item.

Look like you scored, even if you didn't get the bedspread. Have a fabulous weekend, dahling.

Ok, the coverlet is beautiful, but your blue willow cache got my archaeologist juices flowing and I did a little internet research.

There are several general rules for dating ceramic marks, attention to which will avoid several common errors

• Printed marks incorporating the Royal Arms are of 19th or 20th century date.
• Printed marks incorporating the name of the pattern are subsequent to 1810.
• Marks incorporating the word 'Limited', or the abbreviations 'Ltd', 'Ld', etc., denote a date after 1861, and most examples are much later.
• Incorporation of the words 'Trade Mark' in a mark denotes a date subsequent to the Act of 1862.
• Inclusion of the word 'Royal' in a firm's title or trade name suggests a date in the second half of the 19th century, if not a 20th-century dating.
• Inclusion of the abbreviation 'R N' (for Registered Number) followed by numerals denotes a date subsequent to 1883.
• Inclusion of the word 'England', 'Germany', 'France', 'Italy' in marks denotes a date after 1891, although some manufacturers added the word slightly before this date. 'Made in England', 'Made in Germany' and so on, denotes a 20th-century date.
• Use of the words 'Bone China', 'English Bone China', etc., denotes a 20th-century date.

oh how beautiful! don't you hate having to resist? still, the pottery box is a lucky find!

Hmmmm.....If my mother knew about blogs and read yours, she would wish that she got you for a daughter instead of me. Flea markets, yard sales, estate sales, antique stores.... All her thing. Collecting stuff, her thing. So not mine. I loved that bedspread though.

OOhh, the Blue Willow box, be still my heart! I couldn't have resisted that knitted cover, I don't think, even if I had to eat peanut butter for a month. You were on a roll that day, lucky girl.