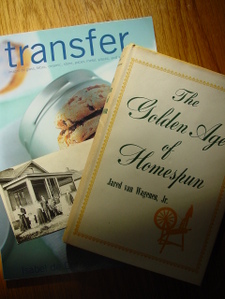 I'm stickin' to my own game at the moment -- that being Tag, or Pom Pom Pull Away, or maybe Dodgeball.  ; )

I've already kicked one major bad habit, and I am in the midst of paying the price (WW) of what that little self-improvement cost me -- it's a debt that will take a while to pay off.  I know, I know, it's worth it in the end -- I've reduced my chances of being burdened by a little oxygen cart on wheels, of having to knit a cozy that matches St. Brigid for it, of having tubes going up my nose in coming years.  The $11 (max) a week it costs me at WW is a lot less than the $28 a week I was spending on cigarettes (and that was a year and a half ago -- I imagine they've gone up like everything else). My doctor said she'd rather see me carry extra weight than continue smoking.  Well, I miss smoking anyway.  I miss it more than my sister does, and I'm pretty sure that I miss it more than Ann -- at the very least, I think about it more.  I still think about it a LOT.  Don't worry, I'm not going to start again (I could never face you people), but I'm not sure I'm ready (or have the fortitude) yet to give up another pleasure -- even though it's bad for me, even though I know I should, even though maybe I kind of want to.  Why do all the good things have to be so damn bad... or is that bad things being good... or whatever... WHY?

For now, I'm going to continue my evasive games, but I kind of hope to be lured into theirs -- if it looks like they're having enough fun. I may find myself irresistably drawn to the sidelines and, maybe, I'll find myself playing their game, too. You guys try to have fun, okay?  ; )

I started this post by uploading the picture you see up there -- my finds at the antique mall last week.  I seem to be coming home lately with nothing but books and photographs from these types of outings.  I thought that my girls would be inspired as much as I was by Transfer, and I could not pass up The Golden Age of Homespun with the little spinning wheel -- it was half-price, but I'd have paid full (it was a bargain either way).  ; )  It doesn't have much to do with spinning -- just a chapter or two related to fiber and textiles -- but I love this kind of reminiscent, pioneer days book.  Anyway, this post has run away with itself and I'm much more excited about...

PLAYGROUND GAMES!  Hot diggity!  I played plenty of them on the playground at school (when we weren't giving each other underducks on the swings, watching so our skirts didn't fly up too high, or hanging from the monkey bars -- and again with the skirts -- it wasn't 'til I was in 6th grade that we girls could wear pants), but we played them just as often at home -- Kickball right in the middle of a T-shaped intersection in front of our house.  I've got proof on the silent, Super-8 home movies that my dad transferred to VHS for us a few years ago (yet to be committed to DVD) where I'm wearing all my favorite outfits of the late '60s and early '70s!  The neighborhood I lived in from 3rd-7th grades was a new subdivision and swarming with kids.  LuAnn, Valerie and Jeanne were my best friends.  Jeanne lived right next door in a "modern" house compared to the rest in the neighborhood (her dad was an architect) and sbe was also one of five, but was the second oldest and had two brothers whereas I was the eldest and had only one brother.  Valerie's dad was a preacher; she had an older sister and imaginary friends and is the reason I got a guinea pig.  LuAnn... her parents had both been married before (so exotic) and it was to LuAnn's house I'd go, whenever I could, just before 3:00 on summer afternoons, to watch Dark Shadows.

We played a lot at construction sites of homes being built in the neighborhood -- in the "home" or in the piles of dirt displaced from digging for the foundation.  When we got older, we often played boy-girl games of Truth-or-Dare (lots of kissing) amongst those hills, hidden from view.  Mostly, we played on the street or sidewalk, in empty lots before the weeds got too tall, or across our front or back yards.  That list of playground games makes me reel with happy memories, and think of the hours we spent playing Dodgeball, Keep Away, Hopscotch, Jacks, Jumping rope, Clapping ("Oh Mary Mack, Mack, Mack..."), Kickball, Marbles, Red Rover, Red Light Green Light, Mother May I, Tag (and variations), Hide and Seek, Kick the Can, Capture the Flag... and Pom Pom Pull Away, my most favorite of all!

Oh that brings back memories!! I loved playing capture the flag!!

We would play freedom - I don't even remember how to play - but all the kids on the street would be into it and it would be dusk and the lightning bugs would start to come out.

I think you should talk to Ann about that smoking thing. I think she thinks about it more than you think she does.

what Cara is alluding to is the fact that I spent the entire weekend stewing over an argument with Boar and thus became trapped in my house for most of the time since I didn't trust myself not to run straight to 7-11 for a pack of smokes the minute I got behind the wheel.

yeah, I guess I still think about it! I just had a smoking dream the other night. Those are becoming better than sex dreams, I tell you. I mean, I know I'll have sex again, but smoking?

Congrats on begin done with the cigarettes. :)
Maybe eI should try the Kick the Can...hmmm..

I love that you remembered to wish them Fortitude.

Sounds like your summer is going pretty good.
Glad it finally cooled down for you.

It only hurts for a minute. Or something.
And, WHY indeed. If only we could feel as passionate about a lettuce leaf and carrot stick! :)
I will take your support. And lend mine for your endeavors, because they are important.
xo
We are strong. Hear us roar. Sometimes, whimper.

Wow. How can Sandy be so eloquent. She must be sneaking the Diet Coke. Me? I've lost my balance for today and been fighting to stay upright. But I've remained true, and didn't even have a caffeine pill like I did yesterday. I think tomorrow will be a breeze, at this rate. But I'm like you are with the smokes: I think I'll be thinking about it a LOT. Good for you that despite that, you are keeping it up. Mwah!

I love Capture the Flag. A little weight is better. Congratulations on your continued success in quitting smoking!

What a great haul from the antique mall! I am glad you are sticking to non-smoking; seldom preach, but lost my mama to 45 years of smoking and saw other illnesses aplenty when I used to work in the hospitals... the urge crops up for a long, long time, but you have made it through the worst!

Thinking isn't doing. You just keep on keepin' on , girlfriend.