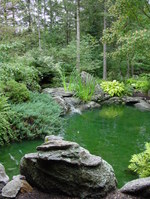 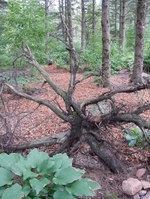 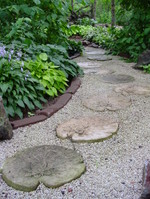 Foxfire Botanical Gardens.  From the top:  panoramic view of the pond.  In the middle:  one of two koi ponds outside the tea house; one of about five uprooted trees arranged so that the roots formed a screen; garden path.  Bottom:  one of  many meditative sculptural works; view from inside the tea house toward the koi ponds, to my rear was a large zen garden; hostas for sale.

The clouds in the top pictures were, at the time, rumbling a warning.  Soon, the "lights" began to flash and we mumbled to each other about the weather, but still chose to ignore.  Then the rain started to fall, but only over the pond -- we could see the raindrops dotting the surface of the water, but felt not a one ourselves -- for a few minutes, anyway.  And still...  You only get so many chances and warnings.  We thought we'd take refuge in the gift shop, but there really wasn't much of one and no one was there, anyway!  My companions took shelter under a canopy near the miniature hosta garden (the likes of which you've never seen and whatever you've got in mind -- it's better, even as you're being pelted by rain) and I quickly ran through one of the sale areas.  Hostas!  I saw some recognizable names from my own garden (Blue Angel, Frances Williams, Guacamole, Sum & Substance), and some that I'd like to add someday (Spilt Milk, Fried Bananas!).  What I really wanted was a "Q" hosta -- Queen Josephine or Queen of Islip -- for a different angle on that letter for the ABC-Along, but they didn't jump up and wave their hands and it was too wet, so I guess it wasn't meant to be.  It was pouring rain. We were all soaked by the time we got back to the car.

Oh, so worth it!  We were all so very glad that we went -- my aunts had not been there in 20 years, and my cousin who was with us had never been.  Incredibly beautiful.  Preparations were underway for a wedding on Saturday -- a big tent covered a tennis court one one side of the pond, tables and parquet dance floor being prepared.  It's the perfect setting for a garden wedding.

It looks beautiful! Great stuff! I haven't been to the botanical garden in ages. Might be time for a trip. Thanks!

looks wonderful -
Have you ever heard of Rice Creek Gardens - here in MN? They're best known for their peonies - but they also have SPECTACULAR hosta's; all of which they mail order.

I can spend a whole afternoon just wandering around their displays & tables full of plants...

Oh poo. Sorry about the weather, but SOOOO glad you finally got to see the gardens!!

Man - that is just to pretty for words.

Next time you go, I'll keep you company! :-)
I never even knew about it and I lived fairly close (Waupaca).. tis a shame.
Thanks for sharing.

Your pictures of the gardens are so wonderful. It looks like a place that I'd love - even in the rain. Actually one of the best zoo visits we ever had was interrupted by a rain storm which only made it better somehow. Maybe it was the company.

I'm sorry it rained on your parade. But at least you'll have an excuse to go back.

Gorgeous photography. It makes me want to go there!

Great blog! I liked looking through your fantastic finished objects, and the Foxfire Botanical Gardens will have to go on our list of places to visit!

So very pretty I just want to move there... do you think they would allow donkeys in? (JK, of course). I am way behind on my blog-reading, but glad to see you had a lovely excursion.