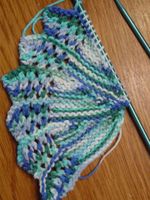 I finished the lacy round cloth last night during the football game that I'd rather not talk about and which I turned off at the lightning break. I'm suffering from a late-summer cold or allergies this week, so I didn't need much prodding to hit the hay, and while I know miracles can happen, they're not likely to happen in the pre-season.  ; )  The photo is where I started.  It's such a quick knit and so pretty!  Even DH said that it was too pretty to use as a dishcloth.  ; )  I'll definitely make more, and maybe even keep one for myself!

I shared the Roasted Tomato Sauce recipe with my "supplier" the other day and she sent over a sack of tomatoes along with a lonely green pepper yesterday -- and two pints of canned pears.  I've got onions and garlic on the list and I'll be roasting more sauce tonight!  Jody, Amy Lu -- how did your sauce turn out?  Anyone else cooking up sauce lately?  Are you playing with it?  What's happening in your kitchen?

I'm feeling a little scattered and at loose ends.  Thank you for your input regarding the sock -- I think I will stop being so fussy.  ; )  Susan suggested that I finish them and if the variation still bothers me, to dye them.  That's a most excellent idea!

Sock and dishcloth knitting will see me through the week and the holiday weekend -- practically mindless, not too hard to screw up, very portable.  I have Friday rather than Wednesday off this week -- Maddy's first day of school!  DH & I have plans to buy lumber, use tools, and finally build the pergola/bench seats/planter boxes/trellis thing over the deck.  I'll have to remember to take pictures along the way -- this is going to be a fun project and will make such a difference!  One or both of us will also be helping Ali move into her dorm on Sunday -- school is only a half-hour away (commuting distance, really, but this moving into a dorm thing is okay I guess), so it won't even take a whole day, and that leaves three for home improvement.

Then I have got to buckle down and get to finishing some of what I've got going!  I've never had such a problem with WIPs before.

That cloth is beautiful.

I watched the first half of the game last night. It looks like it may be a long, hard season for Packer fans.

That cloth is sooo pretty. I do agree with hubbo that it's too pretty to use as a dishcloth, but what a lovely facecloth! I adore the fancy one Margene sent me. It's so special.

I'm guessing you're feeling scattered because your girls are scattered. Building something will help you feel grounded, I bet.

I'm hearing alot of folks saying that they are having major cases of "finishitis" these days. I'm starting school next week and suddenly realizing that I really haven't accomplished what I'd thought would get done. Ah, well...its only yarn, after all!

It must be a summer problem...or maybe out of control WIPs are contagious. I've been thinking that I must get some of the WIPs off the list soon or I'll be buried.

You know I love me a dishcloth - and I say no matter how pretty they are they need to be used. Even though some are reserved for bathtub soaking only ;)

Can't WAIT for the real stuff to start

I made the sauce yesterday with tomatoes from my Dad's garden. It wasn't eight lbs worth, so I used much less onion and garlic, though it was plenty spicy. I ended up blending the whole batch smooth and even my 6 and 3 year olds ate it! Very yummy and so easy. Thanks for the inspiration.

The regular season's where it's at. And I know a lot is going on, but try to enjoy the milestones and changes. I think it might make it easier to deal with. Your sauce from the other day looked really yummy!

Guess the Packers aren't so ready for some football? ;-) No one pays attention to preseason anyway.

I love the overdye idea from Susan. Go to it.

Hopefully everything will settle down once school starts and everyone is installed in their new digs. Thinking about you!

I made one of those dishcloths just recently and everyone told me the same thing (about it being too purty to use for dishes). But it can certainly be used as a lovely facecloth. :-)

I hope that things will soon settle down for you there, Vicki ~

(oh, boy ~ the Pack ~ thankfully I was listening on the radio and not able to see it on the television … ugh)

The lacy round cloth is just lovely.
Remember, it is just preseason.