New project
With a cherry on top 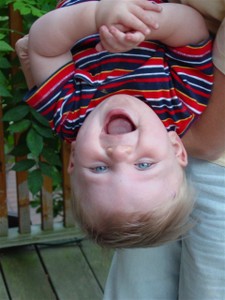 I'll be spending part of my day today hangin' with my nephew.  He was just 14 months old and I'm positively thrilled to say that I was witness on the day that will be forever known as the day that Mack started to walk.  I was even able to catch a little bit of a movie on my digital camera.  Unlike Ali, some of whose first steps I also have on film -- interrupting a friendly game of badminton by walking across the court -- step-step-step-BUM, step-step-step-BUM, step-step-step-BUM -- this little guy took OFF.  A half-dozen unassisted steps late on Friday, 40 or more by Sunday.  It's a full-time job trying to stay one step ahead of him now -- my house hasn't been child-proof in quite a few years!

The cuff of the first Celtic Braid Sock is going FAST!  I was the first one at WW last night, so knit a few rounds before the meeting began.  I think Katie will drive at least part of the way today, so more knitting in the car!  I will definitely have something more to show tomorrow.

Speaking of WW, I was down .6 last night for a total of 9.8 -- ARRRGH, this first 10 is so elusive!  I was pretty good last week -- walked to the bank one day, over to Mom's another -- drank more water, lots of veggies.  I had margaritas, too, but they were wee ones and I was more aware and didn't over-do.  Maybe I'll reach that milestone next week!

Oh!  I had an email this morning letting me know that I'm a googlewhack!

What a happy, happy boy! Give him a hug from me, a mom whose kids are now too old to hold upside-down except by their daddy. (They're 10 and 13.)

How cool with the google thing! That's so neat!

AND OH MY GOD THE CUTENESS!! I'm so glad you were there for his first steps. So much fun! Have a great day!

He is entirely too cute!

I can't believe that I forgot to tell you that Ambrynn started walking 3 weeks ago! Now they both are and we'll be chasing them around everywhere, I'm sure!

how do you not swoon over that face and those cheeks? I want to take a bite out of him - how many points do you suppose?

I don't know if I told you this already but I swear by yogurt for weight loss!

I think that baby is just precious!!! I also think your weightloss is great!

It is eerie how much your Mack looks like my boy Goodwin- he's almost the same age, and just started walking (and climbing) as well. No points for chubby cheek nibbles- otherwise I would have gone over long ago!
Great pic!