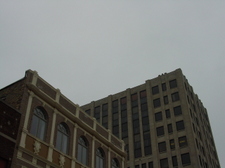 ...basil.  I am nearly going out of my mind from the aroma -- in a good way.  I will be on the receiving end of some surplus tomatoes and corn tomorrow (from an entirely different source), so neither of those got much consideration from me at the farmer's market today.  I did bring home a nice cantaloupe, some zucchini (oddly, no one I know is buried under a surplus of that yet), some fresh purple basil (which scented the car so wonderfully -- I'm dizzy with it), and feta and mozzarella cheese.  I will be making a salad tonight with some of the cherry tomatoes, mozzarella and basil, olive oil and seasoning -- very much along the lines of Gretchen's bellisimo suggestion in the comments the other day (Thank You!).  For lunch today, I sprinkled crumbled feta and back olives atop the roasted cherry tomatoes and pasta that I made the other night (and had for lunch yesterday and again today and, OMG, I can hardly get enough of that, either).  Tomorrow, I plan on making the roasted tomato sauce that I wrote about yesterday.

Yeah, so, I may or may not reach at elusive 10 at WW on Tuesday, but I cannot feel badly at all about taking advantage of the season's bounty.  This is all good stuff.

My Saturday Sky is gray today.  My dad used to work in that taller building when I was a kid.  I used to go downtown with Mimi, who lived across the street from us, on Saturday afternoons -- sometimes Dad would be working and I'd stop in and see if he'd throw me some extra change.  Kresge's and Woolworth's were within a block of each other across the street and my favorite was the music department -- affordable 45s, specifically.  I bought "Dizzy" when I didn't even have a record player -- and I still get a good feeling whenever I hear that song on the radio.  Mimi was a few years older than me, but she never treated me like a little kid or a nuisance.  One summer, we (mostly she) organized a neighborhood carnival in our back yard -- all kinds of games and prizes and candy.  It's always been kind of a blur in my memory, but we do have a few pictures -- it was quite the event that summer!

I'm not a big basil fan, but it sounds like you're eating wonderfully - healthy too. Which is more important, I think (or I tell myself) than what the scale says.

Mmmm...I'd be replacing the mozz with Feta. I LOVE Feta.

We had a Woolies in London--loved it.

I'm buried in zucchini. And you know me. Lucky for you that I live to far to dump it on your doorstep. ;-)