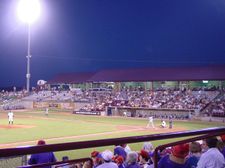 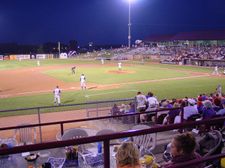 No peanuts.  No Cracker Jacks.  No knitting.  Lots of red hats in the section next to us.  (What's with the red hatted/purple shirted men?  Scary!)  Plenty of hot dogs, hamburgers and brats; potato salad and baked beans; ice cream cake; beer.  It was the Wisconsin Timber Rattlers over the Fort Wayne Wizards (6-2), with additional entertainment provided by Myron Noodleman, Fang the Rattlesnake mascot, and the Bratzooka (scroll down) (flying sausages -- in a bun) (only in Wisconsin?). 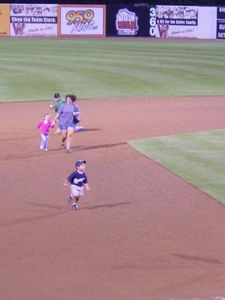 It was Family Night and at the end of the game, hundreds of kids, 14 and under, lined up for their opportunity to run the bases -- they ran in groups of 20-25.  Some of the older kids were definitely displaying their athletic prowess, running to be noticed, hoping (in their wildest dreams) to be signed to something -- anything -- on the spot, or to break a record, the youngest kid ever... you know, the stuff wildest dreams are made of!  The littlest kids were the most entertaining -- left in the dust long before reaching first base, they realized by second base that they're the center of attention -- or not.  The crowd obviously entertained some of the littler kids -- wide-eyed and oblivious to the spotlight -- more than the other way around.

In knitting news of the blogging variety, I have enjoyed the most recent Harlot tour quite a lot -- both her blogging of it and the blogging of it by others.  One of the thing I've enjoyed most is her meeting up with bloggers I "know" -- and the realization again (this happens over and over) that they're everywhere!  I feel as though I could go anywhere and find a kindred soul, a connection.  It gives me a good feeling to contemplate how much larger my world has become and I welcome -- nay, look forward to -- the mingling of the real and virtual at every opportunity.  October is only two months away!  ; )

Forgive my not linking to the bunch of people that I'd like to link to along the tour...  I've suddenly become very, very busy.  It's a good thing, but I'm going to have to adjust my schedule -- yeah, I know, what schedule -- or I could just continue to be irregular.

Happy weekend, all.  This one kind of snuck up on me, so I'll just have to wait and see what happens!

I think we should get together and demand that The Harlot make a stop in our neck of the woods. Are you in?

We have the "Bratzooka" too, but it's just called the Hot Dog Cannon in California. One time I was knitting at the ball game and a hotdog from the cannon (packed in impenetrable bubble wrap) fell right in my lap.Love Myron Noodleman, BTW.

I just had to laugh. I'm taking piano lessons for the first time in my life and am trying to learn "Take Me Out to The Ball Game" to no avail. So when I read you title, it forced me to go to the piano, and practice, practice, practice for the home team! Thanks for the inspiration I needed today.

Ack. The red hats are taking over!

It is a bit cooler here today too and we didn't get the promised t-storms either.

Love me an eventful baseball game. Have a good one! I miss you and YES! October is only two months away!!!!

Too bad for the whizzers! I was sad when I went home last month and they were playing away. Love me some Myron Noodleman!

Don't these minor league teams have the best names? I like the Toledo Mud Hens and the Lansing Lugnuts. (I hope I got those right.)