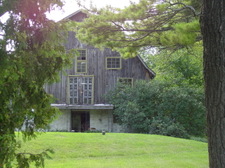 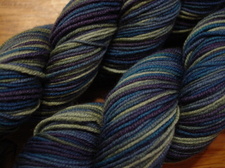 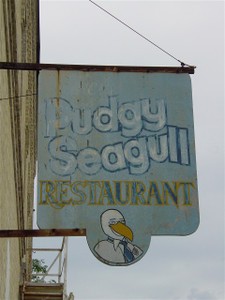 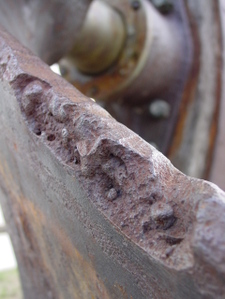 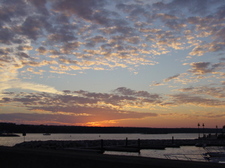 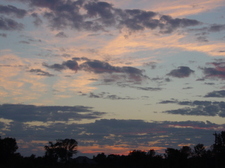 Sturgeon Bay is a weird place. Being in Door County -- the gateway, really -- it's funky and artsy and fun, but not quite as funky and artsy as Egg Harbor, Fish Creek, Ephraim, Gills Rock; perhaps, also, not quite as hokey touristy, either.  It's definitely more year-round working town combined with seasonal tourist town than any other destination to its north.  It's fun to get off the main drag -- some super-duper old houses, barns... barn-houses.  A lot of old houses, especially along the shore, have met with the wrecking ball to make way for new.  In fact, right next door to this funky barn was a brand new house, definitely of a different era than its barn.

Between photo ops, I got a lot of knitting done on the Trekking sock!  I'm only a round away from beginning the toe shaping and it's really all downhill from there.  We arrived in time to visit both fiber shops on my list.  The first (and the one I was worried about missing) was Apple Hollow Fiber Arts (linked in sidebar) -- a good, basic selection of yarn and books, looms, wheels and roving.  We also visited Temptations, just a few doors down (no website), which I've visited before.  Temptations actually has two buildings -- the second one is devoted to cross stitch and needlepoint.  My souvenir yarn of the day is Artyarns Ultramerino 4 in color 123.  I think this may be the very same stuff I sent to Anne last year (maybe even the same color, too?) as part of a Secret Pal exchange -- I've never tried the stuff, myself, and now I can!  Someday.

I guess there wasn't anything that tripped Kate's trigger -- except for some Malabrigo yarn in the Autumn Forest colorway (perfect for her!) which she resisted (for the moment and only because she didn't have a specific something in mind for it and it's still a bit warm to be thinking of working much with wool) -- until she saw a braided hank (is that the correct term) of roving at Temptations.

I told her that it was roving and it's for spinning.  "You mean making your own yarn?"

Oh, yes, she was very intrigued by that -- interestingly, not at the shop with all the spindles and wheels and bags of the stuff -- I told her that we could make a drop spindle with a CD, and that her Nana has two spinning wheels (functionality yet to be determined), and that I have a feeling that I'll be hard-pressed to resist the whir of the wheel come October in Rhinebeck, and may even be forced (goaded, at the very least) to experience the spin.  My wall of resistance may finally be caving -- and I resist only because I can't imagine fitting it in.  I did just tell Cara, though, that the more there is to do, the more I get done.

If you ever find yourself in Sturgeon Bay, I recommend the Pudgy Seagull as a place to try for breakfast, possibly a quick lunch, not really dinner.  Really cool sign, though.

"P" could be for propeller -- and if I was a mariner in any way, shape or form, it would be -- but my own, more personal "P" is yet to come.  Intriguing chunk of an old boat, though.  I really did think about the ABC-Along as I shot that picture above.  ; )

I took so many sky pictures, it isn't even funny.

The PUDGY Seagull! I love it! What a great place, from barns to sky! It's all to love!
Too many sky pictures? Is there such a thing? Hmm.
:)

I love all of your pictures. The sky pictures were fantastic. Sounds like you had a very nice trip. I like the sound of the Pudgy Seagull. Very interesting!

Lovely pictures! I've only been to Door County once, but it was so pretty . . . and I loved the fish boils!

Did I somehow just get blamed for your spinning? I'm stuck in that not enough to do so you don't do anything mode. And yet there is TONS to do. Hate that. But glad you're feeling like there's lots more time to do stuff!

The pictures are beautiful! Glad you had a nice weekend.

Love the pics! I can't believe I've never been to Door County - must be the draw of the North Shore on our side of the lake - maybe next summer.

Lovely, lovely photos! Glad you are having such a great time.

Beautiful pictures!
We have a Sturgeon Bay in Ontario as well. Not surprising, I guess, to have waterways named after fish.
You keep reminding me I am behind on my ABC's - again!

I can't wait to watch you succumb at Rhinebeck.