A Tale of Two Sweaters

My sister Sharon bought a kit to knit a sweater for our mother for Christmas about 10-15 years ago.  I don't know the pattern name or who designed it, but perhaps it is in her archives somewhere and I can come up with it -- or perhaps one of you will recognize it.  You know, I don't think Sharon ever knit a dishcloth or a scarf or even a simple cardigan or pullover -- it seems like she picked up the needles and started to knit a tour de force (or three) right from the start.  Besides the cardigan modeled above, she knit one with navy blue wool cables sprinkled with multi-colored intarsia chenille leaves, and a cotton intarsia fruit cardigan, and started an incredibly complicated wool and chenille smoking jacket before putting down the needles -- despite my frequent urging to take them up again, they've been down for a while now and there's been talk of giving me her (vintage) stash.

There was a lot of yarn left over from the kit -- one full skein of each color of the lovely Donegal Tweed, plus a few extra, small balls.  One thinks that there may have been a mistake in the original kitting-up.  She no doubt made one of the largest sizes -- and still, a lot of extra.  She does knit quite tightly -- the intarsia areas, in particular, feel almost as if they're woven and there is no give in the knitting whatsoever, plus there's been a little felting, which is a good thing, in a way, because otherwise this sweater would be incredibly huge and the sleeves, already too long and rolled up, would hang to my ankles.

Over the years, the left-over yarn traveled from Wisconsin to New Mexico to Ohio to Kansas and back to Wisconsin -- it was good yarn! -- and it eventually came into my possession where it continued marinating in the living room.  Then Alexandra Virgiel had a pattern called Fibonacci published in Magknits, and I knew I had a project for that yarn!  Reading about the Fibonacci sequence in The DaVinci Code was one of the tidbits that stuck with me from the book, and the idea of a Fibonacci-inspired sweater just tickled my fancy.

A top-down raglan on circular needles, however, did not tickle me at all!  I did some swatching, and figuring, and charted the colors and sequence and row count using an Excel worksheet, and cobbled together this and that from that and this, and, voila!, with a lot of wishful thinking and spurred by curiosity, I set out to knit a cardigan in pieces.  It was love from the first -- beautiful yarn, gorgeous inspiration, color and pattern... 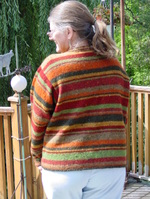 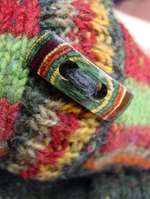 Pattern:  My own, a cobbled-together cardigan in pieces, with indispensible inspiration by Alexandra Virgiel's "Fibonacci." 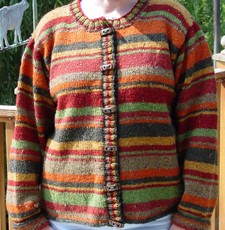 I splurged on the buttons -- they were $5 or $6 each -- but they're so perfect for this sweater, and I got the yarn for free!

I will, forevermore, look at leftovers and oddballs from a slightly different perspective -- one that's more full with possibility.

What an incredible sweater, and a great story behind it. Love the buttons, too! They are indeed perfect, cost be damned.

Gorgeous (and coordinating!) sweaters. I believe I saw the cotton intarsia sweater and it made my jaw drop.

Oh Vicki it looks FANTASTIC!! STUPENDOUS!! PHENOMENOL!! I LOVE it and I can't wait to see you IN IT! Perfection!

Both sweaters are fabulous and great fro autumn.

Both cardigans look great, and I really love the way Fib has turned out - are they different buttons from the previous ones you showed (there seems to be more colour in these ones)? I'm wondering if the intarsia one is Sasha Kagan (the only designer I can think of off-hand who does so much intarsia, and often uses leaves in the designs)

That cardigan is gorgeous, and the buttons are SO perfect!!

It's fantastic. I love the feeling of using up all the odd bits to make something great.

Vicki, it's absolutely terrific! I love the colors and stripe sequence. And the buttons were worth every penny because they are a perfect match!
Congratulations!

Absolutely beautiful! And the buttons go so well with it.

PERFECT. The buttons look as though they were handcrafted just for that sweater.

And I love.love.love the family history that goes with it.

Absolutely perfect! What a fantastic story too. :) You really made my morning.

How cool am I that I have seen - and touched - that very sweater!! I'm not worthy!!! Fabulous job Vicki - big smooch!

Both sweaters are great but yours is extra special because it's YOU. You found just the thing to make the sweater your own. You look fabulous in it. How fun to have a sweater that tickles your fancy and looks so smashing, too!!

Perfectly goregous! Didn't we see another of your sister's creations in NY?

What a feeling it is when you finish a project that just all comes together in the end. It is perfect. And just in time for fall. Don't get lost in the woods, you'll blend right in with the leaves and trees and never be found. Congratulations.

Vicki, It's absolutely gorgeous. Love the buttons too!!!

Having seen your Fib up close and personal - I have to say that it is wonderful and the buttons couldn't be more perfect. The fact that it has a story to go along with it is even more incredible.

I LOVE it!! It looks wonderful on you. Just the right length. Soooooo when will you publish the pattern for purchase? Or is the pattern too close to the original for publication?

Sooo beautiful. The buttons look even better in that picture with the natural lighting!

I'm waiting on yarn to start a sweater project of my own. I've never actually made a sweater for myself, despite all the knitting I've done. Looking back over some of your sweater posts has me inspired to finally make one.

Beautiful sweater, Vicki. Your creativity and resourcefulness continue to inspire me! Will this sweater be seen at Rhinebeck? (I hope!)

It looks awesome. Perfect for a fall sweater.

Beautiful! You've "turned" before the foliage with those beautiful colours.

The Fib looks great. I love the story about the yarn too. It's great that you have 2 related sweaters.

Your sweater turned out REALLY beautiful.

It's just stunning! And to think it was made with left-overs. Left-overs from a pretty incredible sweater to begin with. The buttons really do make it perfect. I might have to take a second look at my left-overs stash. It's getting to be that time of year.

It looks fantastic!! I love the buttons, too - they're such a perfect fit.

Beautiful! It looks great on you, and I know you will enjoy it all season!

Drats! I was so close to bolting!! It could have been mine! Mwaaaaaaaaaaaa!

Yup. What they all said.

Oh, it's even nicer knowing the story behind it - and having seen it "in the wool"!

Wow - what a great cardi and great use of the leftover yarn!
I wonder what my sisters have in their stashes? One won't have much - she isn't a magpie but the other certainly is.

The buttons are PERFECT! Nice job, Vicki! Your stripes line of perfectly, too.

It looks fabulous, its always worth spending money on the perfect buttons.

Gorgeous! They're both simply stunning! The buttons are perfect as well. What a wonderful sweater, and great story! Stripey sister stash sweater! A great sweater for fall- way to go!

Your Fib is FAB!!

oooooh, it's fantastic! So deeelish with color, even the buttons are great!

THAT is a fabulous sweater, Vicki. Very, very nice.

Wow! I don't know how I missed this post earlier this week. Both sweater are just beautiful Vicki! I just love the buttons!