Rodents (specifically, mice).  Gathered together for a group shot. 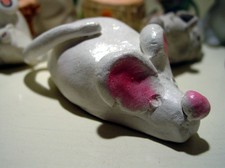 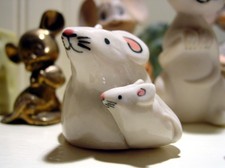 From the time I was a wee, six-pound newborn until I was well into adulthood and had wee babes of my own, my dad called me, "Mouse."  Consequently, I have a small collection.  Given the number of my years and the occasions within those years, multiplied by many a gift-giver, I think the collection is quite under control -- subdued, even.

That one with the pink ears and nose was an art class creation of Madeleine's some years ago.  The "mother and child" one (I know, they're mice) was a gift from my mom.  There are three in the back that are porcelain and made by Grandma. 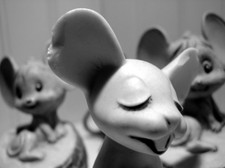 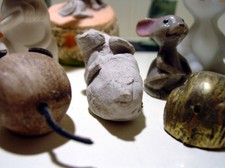 One of them has had a chip on his ear practically from day one.  Some of them have tail issues. 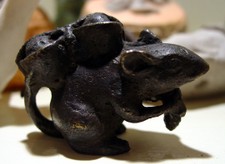 I have not dug out the Christmas decorations -- the little "gumdrop" one with the "licorice" tail and "slivered almond" ears was never put away -- or any of the Mickey Mouse stuff (there would be that -- and why not, he's a cute little rodent) -- or coffee mugs.  For the most part, these are just sprinkled throughout the house -- one or two tucked in with the depression glass, some on a bookshelf, one in the upstairs bathroom, another on my dresser.

I realized, several years ago, that Dad had not called me "Mouse" in quite some time.  I don't really know when or why he stopped.  I was surprised, in our last phone conversation, to hear it.

As long as you don't have any capybaras running around, we're good to go. ;-)

Oh shit. R? I think I fell behind. Damnit.

What a wonderful rodent collection! Like I always say, one can never have too many rodents!

I love 'em!!! They're adorable. Go with your Wisconsin cheeeeeeeese!

Those mice are adorable! It's funny how childhood nicknames stick. My dad still calls me "Boo". Whenever we talk on the phone he always says, "G'night Boo." It makes me feel happy.

I just love it - you have shown us such great collections through the ABC, but this and the nightgowns are tops.

What a cute collection!