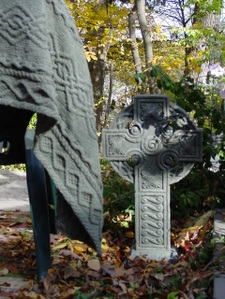 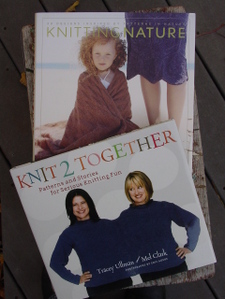 Halloween is not usually something I decorate for -- one or two of my kids are big into it, and a sister claims it's her favorite time for decorating, but it's never grabbed me.  (I was never very clever at the costumes as a kid, either.)  Maybe I saw The Birds and Rosemary's Baby at too early an age (Mia Farrow was married to Frank Sinatra at the time and that was pretty scary to me, too -- he was so old), or never quite recovered from my sleepless week after seeing The Exorcist.  Those movies are probably laughable to kids now, and I can't imagine what they'd think of Dracula and Frankenstein, or anything that Vincent Price starred in.  Oh, when I saw that tombstone -- at Target, of all places -- I had to have it!  I keep moving it around the yard*.  It may show up in another photo shoot someday.  ; )

I had goodies in the mail today, too.  I had a little credit coming, so only had to shell out about $10 for those two books!  I have picked up Knitting Nature every single time I've seen it in a shop, I sigh when it appears on my computer screen -- it had to be mine.  I love it.  I first saw Knit2Together at a book store the day I was in Eau Claire to see Stephanie and was completely taken with it.  It didn't seem right to buy it then, though, I kind of felt a little like I'd be cheating.  ; )  Totally love it, too!

As you can see, Shirl is off the needles completely -- and all the ends are woven in.  It is really a very nice shawl just as it is, but there's a little work ahead to make it a shrug.

*Honestly, how many times do you do that?  The funniest thing, though, is the number of times I've actually done a double-take to read a sign in someone's yard on a Saturday morning -- how many times, really, have you actually seen a "Yarn Sale" in someone's garage?  Obviously, wishful thinking is at work on my brain!

I am the wimpiest of wimps when it comes to horror movies. The Shining scarred me for life - I've never seen the entire Exorcist. Although I LOVE Rosemary's Baby. Read the book - saw the movie - LOVE IT!

I recently saw The Birds for the first time about a month ago and it scared the crap out of me. I hate birds.

Oh yeah and I once saw Vincent Price at MOMA. He was old - but still scary.

You mean I'm not the only one whose finger automatically hits the yarN instead of the yarD?

I saw The Birds when I was a kid -- gave me the first nightmare I ever had. Still scares the craps right out of me, in fact. Nobody could do it like Alfred.

it's so pretty! Don't make it a shrug! Nooooooooooo!

I saw Dracula at the age of 12. And to make matters worse I sleep, alone, on the OLD summer porch in the back of the house...alone. Did I say alone. The stairs were creepy and creaky and INTO THE BACK YARD. I must have slept with the light on for 6 months.
I type yarn all the time instead of yard. We all have yarn on the brain.

Enough about me. I LOVE Shirl! She is a true accomplishment. The tomb stone is so realistic that it look likd you are in the cemetary!

She looks just fabulous--and what a perfect place for her photo shoot!!

I think the Exorcist is the scariest movie I've ever seen. It really really scared me. And I'm so happy that shirl is off the needles! Weeee!

i *love* the last pic with the shawl seen more fully and the tombstone in the back. it reminds me of pics in Aran Knitting. the lighting is so great in your pics too -- dappled sunlight, crinkly leaves. very autumnal!

Vicki, Shirl is just beautiful. I like it as a shawl, also; but, in the end, you have to be the one to decide what would be more useable. Gorgeous work!!!!!

I'm catching up on things that have gone by the wayside the past few days - I LOVE Shirl -- and that picture with the tombstone is great - if you hadn't said anything I would have thought you went to some graveyard with cool stones.

Love the "tombstone" it looks great with the shrug.

Shirl is beautiful, congratulations on finishing. So what's next?

Your Shirl draped over the tombstone just looks so ancient... reminds me of the strong knitting heritage we are all a part of ... now, on scary movies I am with you 100% and refuse to watch them any longer, life's just too short to put my time there.

It looks great! Heh, I hadn't thought of the yarn sale thing, but now I will every time I see a yard sale sign...