It's Saturday...
Reminder to self 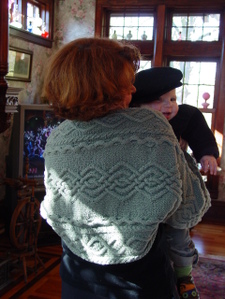 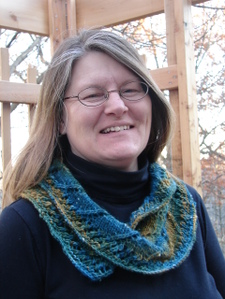 Last year, I packed yarn and needles to swatch for Shirley Shrugs when I went to Rhinebeck.  I didn't actually do any swatching then, but it was all really starting to come together in my mind.  It wasn't long before I had made a chart in Excel and commenced the knitting.  Blahblahblah wouldn't be finished for Christmas blahblahblah scrambled for a different gift blahblahblah finished the seaming at Ann's a year later.  Short-rowed Shirley Shrugs received the nod of approval from Ann, Cara, Katy, Peggy and Ricki -- and I think Cara dug around in my luggage and showed it to Margene, too.  ; )  Nearly every single one with an opinion to share thought that I should have one for myself.  I'll get details posted in the sidebar -- I'm a little behind with some of the details over there!

And lookie there, it's a moebius!  That thing was beginning to make me feel stupid.  I'm happy to have stuck with it, conquered it, and have a product, finished as intended -- a beautiful cowl to wrap about my neck and shoulders, with a singular twist.  I don't think the colors are quite so luminous in person -- but close.  It's gorgeous.  I'd almost like to make another, even bigger.

Mack and my sister came for a visit on Friday night and stayed until early yesterday afternoon.  We picked out the design for his Christmas stocking -- a Grace Ennis design.  Mack's full name is 10 letters long and the directive is that I must use the full name.  I will not be charting and knitting it, as I'd end up with a stocking for the Jolly Green Giant -- I'll use some of my embellishing skills to add it later.  Even with quite a bit of time spent away -- shopping, playing, watching football -- I managed to make some progress on putting together all my packages for the mail and hope to make the big trip to the P.O. on Wednesday, I made a big pot of Chili All Day, and managed to get a new post out of Abbey, too!  I didn't really kick her in the pants, just nudged her softly with my elbow.  ; )

Maddy's party went off without a hitch.  Her crowd is just a little bit different than Ali's, and a whole lot louder.  The party was to be over at midnight, and OMG, there was one kid doing a Chris Farley imitation at the end -- not a favorite even on a good day -- plucking my very last nerve with every word -- the nerve that had already been quivering for hours and was only a few plucks shy of snapping -- and at 12:03, I actually had to say ENOUGH in a loud voice.  It worked.

I also worked on a baby sweater I've got going, wound up my Morehouse Laceweight and think I found a pattern (in the book that I won last month!), and wound the Brooks Farm Acero and started on the smoke ring.  Scarf and sock talk tomorrow.

Those are beautiful! That shrug looks so cozy and warm! I love the colors!
Thanks for the words of encouragement on my blog--you're right: posting photos takes the pressure off!

Nice work! On the shrug AND the moebius. I made one of the Heartstrings Moebius' last year and ended up giving it away - now I gotta make ME another one. They are handy and I don't have a lot of accessories.

I hope now you feel smart, smart, smart. Because you are a smartypants and you kicked that moebieus' ass. Congratulations, Vicki. It's beautiful!

Wow, Shirley is fabulous and well done for getting to grips with the mobeius, it was worth it, it looks gorgeous and the colour suits you perfectly.

Congrats on sticking to and conquering the moebius. It's beautiful! and suits you well. Looking forward to the sock talk. The Bayerische is kicking my butt.

Congrats on sticking to and conquering the moebius. It's beautiful! and suits you well. Looking forward to the sock talk. The Bayerische is kicking my butt.

Yeah, you rock!! You were right, the single twist is fetching!

Wooohooo!! You did it! Can't wait to (re) cast on for my moebius now that I've seen how lovely yours is!

Wow - you have been one productive lady! Love the shrug, love the moebius (especially the color), love the smile. ;-)

Ooh they are both so beautiful! You really know how to pull off a moebius, it looks fantastic on you.

Those are lovely, Vicki. I LOVE the colors of the mobius yarn.... and thanks again for the elbow nudge. :)

I gasp at your daughter's hair every time. Beautiful!

Gorgeous knits! I picked up a skein of Acero this weekend at SAFF--it was so very gorgeous! Can't wait to see what you do with yours.

fabulous moebius! and yours is much more drapey than mine - I will have to try adding more stitches next time.

btw .... is that your house or your Mom's? is that a spinning wheel in front of the fireplace?

and one more thing .... when I did D#2's stocking (her name is 9 letters long) I left off her birth year entirely and just charted her name all around that top cuff ....

While you may think you felt stupid--you look goregous! What a picture up there. Lovely darling. I really wanna make one. But will I be able to wrap my head around it. Love Shirley!!

Oh Vicki - they are both just so lovely. Your face just beams with the Mobeius draped around it! Congrats!

I loved the lighter blue shrug/shawl and am intrigued by charting in excel. Perhaps a little lesson?

All I can say is "wow". I have been admired the Shirl right straight along, having decided to live vicariously as I doubt I would have the stick-t-itiveness... and the ring is such lovely colors. The one time I tried one of those, it turned out so huge that I would only need it in a major icestorm...