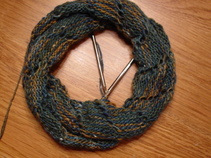 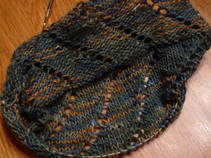 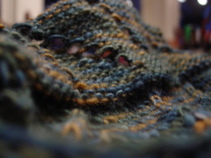 I cast on the moebius for the umptieth time on Sunday night at Ann(e)'s during the Arrested Development portion of my long, fiber fest weekend wherein I learned the source of most of the rest of the weekend's soundtrack -- the wacky AD wisecracks.  There seems to be one for every occasion!  ; )  And by that, I mean that there are many, but also pretty much one.  A one-size-fits-all wisecrack.  Yeah.

Sunday's cast-on attempt was just one of a series of tries over the past few months, once with the kind and able assistance of Amy Lu.  And still... I've been having a problem with the moebius.  I'd finally got nearly everything right, except for a big, bothersome, gaping hole that would appear at the beginning, but I wouldn't see it 'til the end.  It's a moebius, so that kind of make sense.  Trust me.  I actually figured that part out all on my own -- it had to do with one little bit of direction at the very beginning that I missed, oh, and then another one -- and I've been merrily knitting my way back to Wisconsin from New York, making mighty fine progress.  Until now.  I'm feeling downright plagued.

The moebius, you see, is supposed to have a twist.  Mine has three.

The good thing is, I'm learning something new each time.  Today's lesson:  Every single word in those directions must be read, heeded, understood, read again, and then taken literally.  And also double-checked.

I will not let it get the best of me, so I'm ripping and re-doing.  Again.  I'm also casting on a few more stitches this time for a few more repeats -- it'll fit better.  I do all this, over and over, with the head-whacking and everything, because the yarn is just so beautiful and this item something so practical and yet so pretty.  I think I might also make some pretty, warm and matching things for my wrists.

Three twists is not a problem, it's a feature. All the other knitters will be asking you how you did it!

You must really want one of these. I'd have ditched the thing a long time ago. ;-)

OMG!! look at those DYI directions - I believe it says something about making sure the cable of the needle only crosses itself once.

You are much more patient than I am, I would have definitely given up by now. It is very pretty yarn though, hope you get it this time.

Have you seen the Knitty Gritty episode about this? I think there's a video and it's super helpful!

Who DOESN'T love the Jews?

3 twists is still a moebius. As long as it has and odd number of twists it will still only have one edge and hence will still be a moebius. You've just been doing a more andvanced form of moebius knitting than you had planned.

Almost Felted Lauren tells me I MUST get up on the Arrested Development bandwagon. Soon, I think!

I love that moebius. But you're scaring the crap out of me and I know I'd never dare try (well, maybe...)

Don't feel bad, I've cast on for that silly moebius a half a dozen times. I just can't get it, and I wasn't able to see the knitty gritty episode. Until I find someone to help me in person with the darn thing, mine will be an indefinite UFO. It doesn't stop me from wanting one though!

Yeah, what's wrong with an extra twist or two?

Wow! That is dedication. I would have given up by now.

Isn't 3 twists advanced? I think that's in Cat's 2nd book. Near the end.

See, you're advanced. Your brain wants to make it more complicated.