A blog post a day
And so it begins 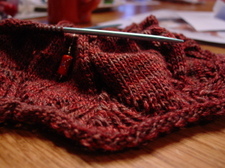 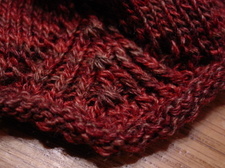 Beaded Smoke Ring in Brooks Farm Acero (which isn't actually shown on their website), both pattern and yarn purchased at Rhinebeck.  I've finished the lace edge and I'm at the part where I just sail along in stockinette for many inches.  That's a picot edge all along the bottom that I'll be tacking up by hand because I wasn't thinking too clearly at the very beginning, I guess.  It's been a great week, sunny and clear, but also cold.  I was freezing yesterday -- maybe just tired and rundown (I actually went to bed, and turned out the light, before the late news last night -- almost unheard of) -- so there is definite motivation to knit a neck-warmer!

My brother Michael called last night and it was so good to hear from him!  He has been working more and doing more -- doing his actual work rather than busy stuff -- he's been at 6 hours per day and is bumping up to 7 next week.  He went hunting yesterday, the main point being that he's really just happy to get out in the woods and watch the turkeys walk by.

I think we're still decided on the stocking pattern for Mack, but Berroco isn't making it easy with their new stocking patterns, John and Colleen.  And what about Lion Brand?  They're introducing a new collection of handpainted, natural fiber yarns -- mohair, silk, cashmere.  Has anyone seen these in person yet?

I ordered the pattern for the flared smoke ring but resisted the beaded one. As soon as I finish Dale's "man lace" I'm going to start the smoke ring.

That is an awesome color of Brooks Farm yarn - I'm excited, they'll be at Kid & Ewe nest week where we have a knitblogger meetup. I just got the Lion Brand announcement this morning about their new All natural fiber yarns. They are very pretty, though the cashmere is pricey, that may just be a fact of life. May never see it in person her in Texas unless I order some. It's just too high end for our Hobby Lobby to carry.

that looks wonderful Vicki! I am having knitter's envy.

Beautiful! I didn't even venture into the Brooks Farm booth...guess I should have taken a quick look. That color is gorgeous.

I am SO in love with that color. Alas, I am already married. *sigh*

That is very pretty,fab colour. Good to hear news of Michael, glad he is still improving.

The beaded smoke ring sounds like it will be yummy! And it's good to hear that Michael is doing well.

Those stockings are great! I am still knitting one that I started two years ago for Rob. I guess I should pull that out, huh?

i keep kicking myself for not buying any brooks farm yarn at rheinback!!! i had to show some sort of self control though ;-) looks beautiful!

The beaded smoke ring looks lovely! The color is yummy and seasonal (makes me think of cranberries).

It looks fantastic! What needle size are you using for Acero? I'm going to swatch swallowtail with mine so I'd like to get a good jumping off point;)

I checked out LB's yarns and was shocked by the price. 102 yds of worsted weight for $39.95! Jade Sapphire Mongolian kettle dyed cashmere is $36 for 150 yds. JS is the softest cashmere I have found and I searched them all!!!

wow, incredible color. and, your photography is sooo captivating!

Your photographs are beautiful - I love the light and dof. The smoke ring looks great and I'm so glad to hear Brother Michael is doing well!!!

That is beautiful -- but can I just say WOW I am so glad to hear your brother is doing so well and that he got out hunting -- and I totally understand about the just getting in the woods and seeing the turkeys etc. (squirrels are DH favorite to see scampering around while he is deer hunting)

i love the brooks colorway you got. it's coming along really nicely.

Love the color of the smoke ring...beautiful.

Cables Untangled is already out, and I have it and love it.

I'm reading backwards a bit and am glad to hear your brother is doing so well. What a great, fun time you must have had making dress forms; body consciousness is so whacked thanks to too many media images of what's "good" - a useful and balancing tool to stand back and see yourself, plus your sweaters will turn out better.