And so it begins
48 Things for my 48th Birthday 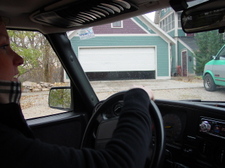 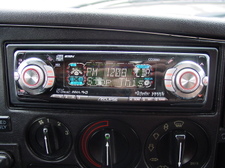 We listened to John Mayer's new CD all day.  I'm still fascinated with Kate's new CD player.  She got new speakers recently, so it sounds pretty good, too.  And her license plates finally came! 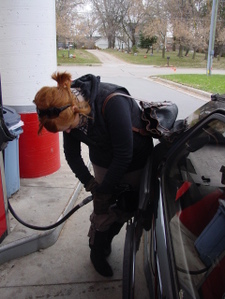 Our most frequented local grocery store has started a new program where we earn points which can be redeemed for gas -- the more points you have, the more cents-off-per-gallon you get.  We were up to 30 cents off per gallon yesterday, which I said aloud after I scanned my card at the pump, and a voice from the other side of the pump said, "THIRTY CENTS?!  I'm only at 27!"  Wherein a conversation ensued about points and I informed her that I hadn't even redeemed the 7500 bonus points yet that they sent me for my birthday!  So last night, I went to buy all the stuff for tonight's lasagna birthday family dinner party and redeemed those birthday points, plus earned quite a few more, and my next fill-up will be FORTY CENTS per gallon less!  Woo-Yowza-Hoo!  I'm thinking that maybe points will become more difficult to earn after the novelty wears off, but I'll sure take 'em while I can get 'em. 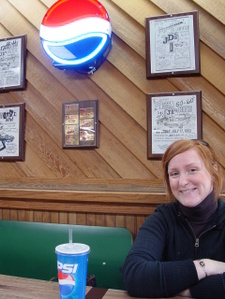 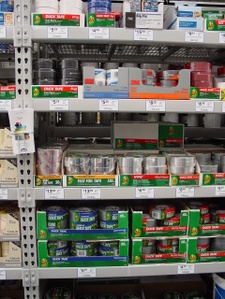 We went to two LYSs and I purchased materials for Mack's Christmas stocking, and also a ball of Kureyon because I just have to try one of those Lizard Ridge squares -- they just fascinate me.  We had fun just running around all afternoon -- buying fresh bread and drinking fresh coffee while eating samples and fresh cookies.  We had lunch at JD's, a local "drive-in" that's been around for as long as I can remember, but to which I'd never, ever been before.  The only explanation I have is that when I was young, Tom's was closer and we always went there -- and JD's was just never on the way to anyplace I went on a regular basis.  Mmmm, good fries.  I think I'm going to have to find some places to go or do some re-routing.  ; )

After lunch, we hit the brand new Lowe's to consider Duck Tape possibilities.  While Katie and I piled rolls of duct tape in front of us, contemplating how many we'd actually need, a young man (employee) walked down the aisle and said, "Whoa!  What are you going to do with all that duct tape?"  Katie and I couldn't help but exchange glances and giggle a little..  "...tape somebody's car shut?"  He wasn't just commenting on our pile in the form of a question, nor was he just passing through -- he'd actually stopped and expected an answer.  I tried, as best I could...  asking if he knew what a dress form was and explaining that we were making something like that for ourselves -- of ourselves -- by wrapping our bodies in duct tape -- this is pretty much where his eyes glazed over and he took a step back -- over a T-shirt.  "Oh, good, it's over a T-shirt, because you don't want to be putting that tape ON YOUR SKIN!"  And then he hurried off.  ; ) 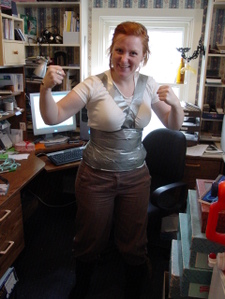 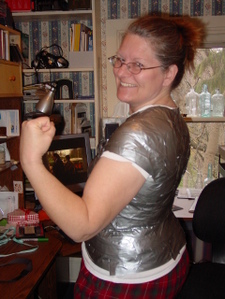 There's something about wearing a duct tape corset that makes you want to strike a pose and consider your super powers. 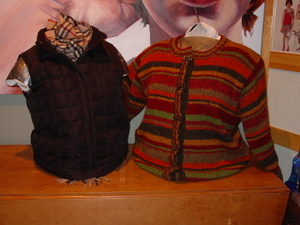 In the end, we used about one roll of tape each -- which means that we have enough tape to do Maddy and Ali and all of my sisters, too, if they want.  ; )  C'mon over, we'll do you!!  Seriously, I recommend it.  Even if it's never actually used for fitting clothing, it raises awareness of your body and you'll learn some things.  Katie said, "Wow, I have a waist!"  Well, no kidding -- personally, I think she has a really cute figure -- but a person doesn't (can't) really look at (see, contemplate) themselves in a flat mirror image.  She also realized last night, looking at our dressed torsos, how much broader my shoulders are than hers -- it's always been that way, she just never saw it before!

We had a blast.

Duct taping, or mother-daughter bonding at it's finest. Sorry, couldn't resist.
I, too love the Lizard Ridge. Surprisingly the dh, Mr. No More Than Two Colours At A Time, gave it the thumbs up as well. Good thing he doesn't know the price per skein of the Kureyon :)

that's it...i'm having my mom duct tape me over christmas break. i'm sure she'll thank you for it ;)

as for you -- that pic is fabulous! you can just see how much fun you were having on your face.

That was definitely one of the best things I've seen this week! Duct tape is the ultimate material and good for everything although I must say this is a new one - what is your superpower name?????

It's really neat. Does it stand up on its own? I remember doing one with brown paper tape years ago, but this looks much better. Are there instructions on the net anywhere?

Sounds like a great day! What a great mom/daughter pair! Love the idea of a duct tape corset; would I have to take it off? Or can I pretend to be a beauty queen and use it at all times to suck things in? Fabulous superwoman poses! Thanks for sharing.

Yesterday I read The Bookish Girl's duct-tape-dress-form post and fell in love with the idea. Today you and your daughter are doing it. Me next, me next! Unfortunately, I have neither mother (long gone) nor daughter (2 sons), and somehow I can't picture my husband cooperating. I've been coveting a *real* dress form for several years so this whole thing is exactly what I want to do! If I didn't live 200+ miles from you I'd be over this afternoon!

A great idea with instructional photos that will have me chuckling all day. A winning combination! Thanks for the tips.

hmm, looks so good and fun.

You do look fabulous! Great idea. Wish you were closer...Susan won't do it with me!

I have to do that. Do you have to stuff it with something afterwards? It would be so great for figuring out if the knitwear was coming out right. instructions and more info, please!

Nevah mind...I found the answer easily by justfuckinggooglingit. (as in duh, Norma, how 'bout using your own advice???) :)

I've done two duct tape forms over the last few years. I'm a bit hesitant to make another one after my sister nicked me in a (ahem!) rather delicate area with the scissors while removing the form the last time!

Note to anyone considering making one of these. Bandage scissors are the way to go for this project. TRUST ME!

So what are ya sewing, hmmm?

let me first off thank you for all the Pepsi Cola representation in that one photo. Mr. Boar certainly appreciates it! those duct taped dress forms are something I have been meaning to do for years - I believe seeing all the fun you had may have given me that final push!

I would've loved to eavesdrop on that duct tape conversation in the store!

What fun!!!! Hope you have a wonderful day!! Happy Birthday, Vicki

I have really been wanting to make one of those duct tape dummies for myself. I just need someone to help and the daughter is totally bored with the idea.

Save a roll of duct tape for me and I will be right over!!
I have visions of the boys helping and leaving me all taped up....

I'm so glad you guys did this! It is a great excercise in self esteem. Especially when you do it with lots of people - we all have rolls and flab and interesting proportions!