Can you hair me now? 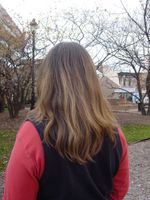 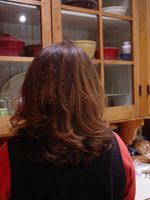 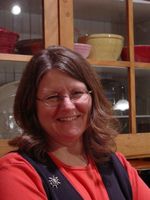 If I may say, I've got a head of hair that just won't quit -- sometimes it's just too much and I really wish I could give some of it away.  I used to wish I could trade hair for boobs.  It's one of my best features, though, beginning way back in my days as a towhead toddler right through to the big-hair days in the '80s.  I've held on to most of it through three pregnancies and it's beginning to gray a little.  It's thick and healthy and there's lots of it -- always has been and, hopefully, always will be.  I haven't had a perm in a while, but it used to be that I'd have to book an extra half-hour just to roll it all up.  The worst condition my hair was ever in was after getting a Barbra Streisand perm -- inspired by either A Star Is Born or The Main Event (I don't remember which) and hating it so much that I demanded it be "removed."  Then came the scarecrow period.

My hair was very blonde right up 'til junior high.  Mom used to rinse it with lemon juice sometimes when I was little to keep it blonde.  As a teen, I recall treating it at various times with egg, mayonnaise, and beer (yeah, I remember washing my face with Tide, too, and it wasn't the liquid version).  Nowadays, it's usually just shampooed with whatever's on sale and rarely even conditioned.  I don't color it and I don't perm it anymore, mainly because I refuse to spend an entire afternoon in a hair salon every 6 weeks.  I tried to do a home perm once and it was pure hell -- trying to keep Roller #1 to stay while working on Roller #2 (did I mention that my hair is straight -- and stubborn?) resulted in a big waste of time that ended with tears and tingling hands and arms -- and I never even got beyond battling those two rollers.  I have tried to color my hair at home, but I'm so afraid of turning blue or lavender or green that I'm ultra conservative in my color choices and there's never any noticeable difference.  That seems like a big waste of time, too.  It definitely helps to keep my head and neck warm, and my hearing usually improves if I tuck it behind my ears.

So here's the new 'do.  Sorry for the not-so-good "after" pictures.  I did have a before picture snapped of the back -- it really was getting long!  It was basically taken up to the shortest of the grown-out layers and then layered and thinned a little more.  When I was asked how I wanted it styled, I was a little confused.  I haven't thought of my hair being "styled" in a while -- it's usually wash 'n wear around here, worn down or in a ponytail.  She said, "Straight or curly?"  CURLY???  Me?  I haven't had curls in I-don't-know how long, so I opted for CURLY (then was immediately sorry because, you know, I have all this hair).  But I tipped her big for my great big, soft, bouncy curls that I loved so much, I'm almost ready to dig out the electric rollers and see if they still work! 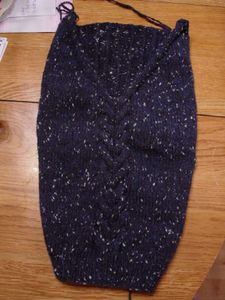 That should be the last time you see my mug around here in a while.  ; )

There's a coup going on over here!!

The Peace Fleece Coup d'Etat Cardigan has one completed sleeve and the other is underway.  I'm not sure about all those white specks... I love the black/blue/sometimes-even-brownish-gray main color, though.  This is intended to be an everyday cardi and it's going to look fantastic with jeans.  It'll also look quite nice with black pants, or brown, or gray... you get the picture.  This is a swatch, and it's actually my second.  The first was done with smaller needles and also had a seed stitch body on either side of the cable, as written in the pattern.  There's no way my wrist and arm would survive knitting nearly an entire sweater in seed stitch, so the second swatch was done on larger needles and I opted for plain ol' stockinette.  I like it a lot.  I think it'll improve greatly with the eventual soak and block.

You look marvelous! I'm throwing over Ann for you;-)
We share the same type of hair, too much, too healthy, too straight. And as for all that time in a salon (NOT!)...I'm with you there, too!

Beautiful dahlink! Did you color it? With all the hair dye on the market today I don't know how you could end up with blue if you didn't want blue, you know. But, then, I've been coloring my hair since I was 16 so I don't know any different.

I love it though - have you been shaking it around all day? You know, Breck girl like?

I love the new haircut!

First off Vicki... Belated Happy Birthday, fellow Scorpio!
The hair! OMG.. it came out stunning! I would do anything for your hair, really! I've lost more and more hair with each child, AND I started to gray in my mid 20s.

Do you knit Continental?? It is really easier to do seed or ribbing when the yarn is in the left hand.

OMG its fabulous, don't colour it if you don't have to. Mine is about 75% grey, so have been colouring it for a long time but it grows very quick so every 4 weeks for colouring is a pain!!

The haircut is wonderful! So bouncy! I've noticed my hair has thinned a bit in the last couple of years. Sigh.
And I love the new sweater, too.

I like the hair. It suits you. If you can't find your hot rollers, let me know. I'm sure I have three or four sets.

That haircut is awesome!!! Don't you just love how good your hair feels after going to the hairdresser?

I love the new "do"! I can't believe you don't have to color your hair...lucky you!

sassy and cute. love it

You rook maaavelus!!! I thought you had nice hair before, they really did a great job! You have a nice mug too! (Not getting weird on ya, swear). I don't blame you for going stockinette and the color is great.

Well, your hair does look great--great cut! . . . and I know lots of people who
make their own hair products with things like honey and mayo and apple cider
vinegar, so your experiments don't sound that weird to me!

Love the new "do",Vicki. Makes you look so much younger!

It's a fab new do. Cara wants to know and I want to know too: Have you been shaking your hair all day like the Breck girl? And running your fingers through it?

I know you will love the Peace Fleece after it's soaked and blocked. It completely transforms.

So sassy! So flirty! Work it girlfriend!

I envy you your hair. Mine is thin and straight and wimpy. I have an awesome hairdersser though. My girls have the kind of hair that makes hairdressers beg them to stay so they can play with it. Really thick and wonderfully gorgeous. Every one of them. They are asked to be hair models and all kinds of flattering things. Just like your hair. Lucky b*tches, all of you!