Change is good
My morning squeeze

Getting a jump on the random thing

Oh, man, there's so much going on around here...

I'm thinking it's time to do some ditching and consolidating with the various phone services we have and that means that I'm researching cell phone plans.  I'm trying to keep it positive, keep it fun.  Oh, yeah.

I am seriously thinking of taking a couple of classes in web design and development.  I cannot find anyone to help me, work with me, to do a simple task without wanting to do a complete redesign or a complete take-over.  I enjoy this kind of stuff -- it's kind of an extension of my old typesetting days in a way -- and I know I could do it, have almost even done before with dumb luck and when I had a little more time to focus and figure it out.  One of the classes is offered either on-line or in the evening, the other is an an hour on one morning and two on another morning that I normally work...  I think my work time could be covered, and the school is just a hop from work.  It might work.

Speaking of school.  There was a glitch in the accounting at Ali's school, so I'm attempting to figure that out today.  First call this person, then that person, then another one.  Thank goodness, everyone's been nice and helpful and I haven't had to listen to crappy canned music, nor have I had to press 1 or 2 or 3 or 4 more than once or twice, I think.  I believe I have one more call to make -- but I have to wait a bit before I can -- I guess that will be the make it or break it one.  I'll give it a little more time.  UPDATE:  It's been all straightened out and I'm still smiling!  ; )

Katie does not have to work on Saturday, as she thought she might, and we must have been high on the whole acceptance thing when we thought we could drive down to Chicago on Friday, attend an opening that lasts 'til midnight, and then drive home again.  Chicago is, like, 3-1/2 to 4 hours away -- one way -- on a good day!  Um, yeah, now we're trying to find a hotel near the Merchandise Mart. 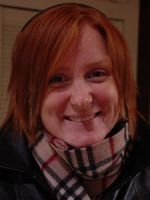 I'm trying not to get too anxious over the whole Merchandise Mart Avant Grande Chicago Art thing coming right up on Friday, but I'm not sure I'll succeed.  I remember going to Art Expo New York at the Javitz Center, must have been 1992, a young-ish wife and new-ish mother, me... from Wisconsin... I saw my first pierced eyebrows at that show.  And Deborah Harry, I saw her, too (CALL ME!, man, I love that song). (By the way, I've been thinking that the soundtrack for Rhinebeck '07 should be all GIRLS!).  But the eyebrows, man, I couldn't keep from looking at the eyebrows -- multiple piercings in each one -- furrowing my own brow, trying to imagine how it felt, every time I passed a certain booth.  Trying not to stare, but, oooooh, the eyebrows!  Anyway, Katie bought a chic new dress to go along with her cute new haircut... she's so hip and cool and the place is going to be hopping with the hip and cool and I'm feeling not so hip and cool.  It's 2006, now, and Chicago... oh, whatever shall I wear?  Did I tell you that she's going to have a pager?  There's a VIP and press thing early and she'll be given a pager to carry around all night?  At an art show?  I never heard of such a thing.  I hope she gets paged!  I'll definitely be bringing some knitting, maybe I can find a nice soft couch, out of the way, at the Mart, practice deep breathing, be a wallflower.

I have heard from many a Latvian mitteneer, both accomplished and wanna-be, in the past few days.  The words "knit along" have even been spotted in emails.  Whaddya think?  Any takers for that sort of thing, say, after the holidays?  A friendly little, no-pressure knit-along, maybe with a blog, where we could encourage each other in tackling the Latvian mittens?

Fucking bursars. I think the 4th rung of hell houses them.

So my husband and I were actually JUST there in Chicago and the Hotel, although spendy... is right on top of merchandise mart.

Chicago Holiday Inn Mart Plaza. It's a huge hotel... and if you dont want to eat at their expensive (and not so tasty restaraunt..) just walk down to Merchandise Mart. Just a quick walk from the hotel (down a few elevators and what not)... places to eat, shop, buy books... no yarn though, that may be your deal breaker, ay?

The rooms might be a little spendy if you want a big one... but other than that it was a great stay. Beautiful views from corner rooms... I'd stay again and Im pretty hard to please.

Good Luck to you and Katie!!

I think YOU are hip and cool, Vicki. You'll be great. Just relax and enjoy the time.

After the holidays? All I've committed to is a lace shawl. And I need to learn this. I could be in....

Those three magic words: "after the holidays." Perfect. :)

5 or 6 blocks from the Merchandise Mart is the House of Blues Hotel - we stayed there a few years ago and had a blast - very fun decor & nice people. BTW, you are Katie's mom, that makes you hip and cool by definition! Have a great time.

Oohhh, I've been wanting to make Latvian mittens, and a KAL would be the perfect excuse to make them! I'm in!

Just remember: the Cool People are not necessarily the Happy People, whereas the Knitting People (that's all of us, babe!) are definitely Happy People.

Don't know that I want to do a whole mitten (not sure if I have time!), but there are one or two technical details that would really interest me, eg knitted braids, especially in more than one colour ...

Looks like you got spam! I got one of those too. Jerks...If I were to do a Latvian mitten, it may surely drive me insane. I'm in!

You mean the BIG holiday, the one that starts with a "C" and is in around 5 weeks? The one that you buy presents for and I haven't yet, that holiday? After that, I am up for anything if I am still sane.

Vicki- there are plenty of hotels within walking distance of the Mart.......email me and I'll give you some names!

As for what to wear: Wear black; always works in Chicago. Throw a scarf on, that works too. Or some lace..........that works.

Have fun! If you think you can take in some yarn crawling, let me know!!!

You KNOW, I hope that I would be so IN for that knitalong. :) How could I resist anyway??
xoxo

If you didn't add after the holiday's I wouldn't even be tempted...but I have the yarn, the book and I should have the time, so count me in :-)