A show of hands
Getting a jump on the random thing 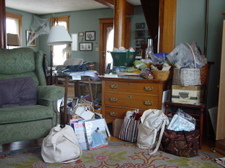 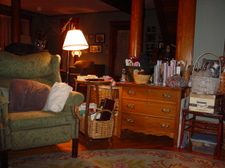 My favorite puzzles were word searches and mazes, and the ones where you had to find all the differences between one picture and another -- what's missing, what's been added, what's changed?

There's not a lot missing or added between those two pics of "my area," but a WHOLE LOT has changed!  The lingering evidence of recent travels was organized and put away; stickiness from something spilled but not quite all cleaned up (Maddy's Halloween party, I think) was wiped away, along with a fair amount of dust; the at-hand accumulation of books and magazines pulled for reference or casual perusal, plus a few additions to the stack from my birthday and recent thrift store finds was easily taken care of with a pair of bookends!  What a difference, hm?

The materials for Mack's stocking, pieces of Coup d'etat, materials for Latvian mittens, and my workbag for socks are the only projects atop the chest.  The basket to the right holds both Travelers' Vests... and I will be getting back to those, sooner rather than later, but not soonest.

I cast off the second sleeve of the Coup yesterday afternoon as Favre left the field at that big, bad Minnesota Metrodome with a HUGE victory.  (Ack, I should have listened when they said "the Vikings defense is No. 1 against the run" and benched Ahman yesterday, as I did suffer a Fantasy loss.  Oh well.)  I watched the game at Mom's, then came home and did my clean sweep thing.  I cast on for the left front of Coup last night and am nearly at the half-way mark!  At this rate, I might have a finished sweater to wear by the time Knit Unto Others kicks off!

Wow, I am inspired to attack the pile next to my fav knitting place, now. sort of. Ugh!

What a nice tidy knitting corner, I love it like that, then you get to make it all messy again.

I've said it before but I'll say it again. I love your house, Vicki.

My corner looks like that still, I must do something about it before the holidays. How do you stay focused on sweater knitting? I started a sweater for my son last year and have only knit about 4" on the back (and he keeps asking when it will be done). I like the pattern, I would just rather knit socks.

when I come to visit, can I sit in your chair? will you make me tea?

Doesn't that feel great? We did a related thing this weekend, more olefactory than visual, though ;-) I too love your house!

Did the Vikings loose yesterday?? ;-) Looks like both you and Brett did some tidying up yesterday!

That sure looks cozy - I don't know if I could knit there though, I'd probobly fall asleep.
(Bret who?)

You know all is well when it meets the cat's approval. Great space, Vicki. ;)

Looks great! But you don't want to start a cleaning epidemic or anything.

I liked those puzzles too. We must be both really good at pattern recognition - and became knitters. Go figure. Now I am beginning to wish I could see the top of my coffee table. I know it's under there somewhere.

Please PLEASE come to my house and work your magic. I'm in a complete panic that the place will be a disaster still when G gets home from the hospital and he'll trip and break the other hip.

I love your house too.

Now will it stay that way?? That is the question my DH asks when I clean my fiber chair area...LOL!