You might call this the Frickle-down effect on a meme...

Julie at Fricknits did G and gave Carol at Knit-and-Run an F, and (here's the Frickle-down part) Carol has kindly given me M!  I will write on ten topics or themes or truthinesses that begin with "M."  If you want to bore other people similarly, please ask me for a letter and I will give one to you.

Mackluks.  Carol was especially enamored of the Mackluks, and so am I.  They were one of my favorite gifts to give this Christmas.  I'm also completely enamored with the recipient of the Mackluks -- my nephew Mack -- but that's another story.  Though not technically mukluks, that's always what we've called this style of suede-sole slipper socks.  (I wonder why I so often give pet names to my projects.  There must be some significance.)

M----- is my last name!  It's a difficult name to pronounce, telemarketers absolutely murder it -- it could be French (there are some in the Paris phone book), but husband's family is decidedly German.  I dated him for quite a while before learning how he pronounced it, which, in fact, is quite different from how some of his very own relatives pronounce it.  It's easily confused with other words -- or, rather, common misspellings of two common words and/or a contraction (with or without proper punctuation, but that, too, is another story) -- one is a troublesome bug, the other is on everyone's family tree -- and it's so very aggravating when doing the occasional internet surname search.  I am a hobby genealogist, you know; in odd moments of boredom, I type my surname into a search field!

Mom.  It is one of my great pleasures to be one.  I'm smack-dab in the middle of a transition that will take several more years, as my three daughters grow up, find their wings, move on and out, start living lives of their own.  It seems really odd, but already, I am sometimes unaware of (or find it difficult to keep up with) their comings and goings, even when we're all under the same roof.  I sometimes don't even wake up when they come to tell me they're home.  What does that mean?  I look forward to our relationships evolving with more equal footing.  I sure do miss my little girls sometimes, but I definitely enjoy the thoughtful, funny, independent young women they're becoming.  I guess we're always in transition, it's just that sometimes it's slow or even imperceptible, and other times it's a raging rapids and I'm just trying to keep my kayak from flipping over.  Next thing you know, I'll be wresting that G away from Ms. Frick because I'll be wanting to use it for Grandma.  Okay, really, not the next thing!

Movies.  We went to see Happy Feet on Christmas Day as a family.  A Christmas Day movie has become a tradition.  I enjoyed it quite a bit -- the music was fantastic!  The very best part, though, was at the end and wasn't even a part of the movie.  While the credits ran, there were little spotlight dances by "star penguins" at the bottom of the screen; two little kids -- a girl, about 9, and her younger brother -- were moved to join in, dancing with complete and utter happiness on the floor at the front of the theater.  It was just so fun to watch them.

Movie memes!  I like 'em.  Here's a new one I found, compliments of Beadslut.  (Warning: that "Quotate" button is entertaining and can tie you up for a little while.)

Which movie was this quote from?

There was another at Mim's the other day (mine was the same as hers).  I think one of the first memes I ever posted on this blog was a "What Classic Movie Are You?" meme!

Maroon is one of my favorite colors; it shows up a lot in my wardrobe.  It is not to be confused with moron -- that's not a color.

Meg.  I watched the Meg Swansen Dubblemossa video and now I know I want to go to Knitting Camp someday, or at least take a class from her -- I know she teaches the rare class here and there.  Here's the link to a streaming video clip about Camp (scroll down) that I found on the Schoolhouse Press site from a segment about Knitting Camp that aired on a program called "In Wisconsin" in December '05 on Wisconsin Public Television.  It is very entertaining, and you might glimpse some faces you recognize -- among others, I spotted Handknitter Sarah, Lizbeth Upitis, and Joyce Williams! It pretty much makes Camp irresistible!  Anyway, I didn't knit a single stitch while I watched the video, I just watched and listened, listened and watched.  Meg says that her mother was mesmerizing, but I think she is, too.  Oh, what fun!  I'm anxious, now, to watch the other video.

Mittens.  Yep.  In skirting the actual knitting of the coveted Latvian mittens over the past couple of years, I have knit North Star, two pairs of Thrummed, and a Flip-top.  I will -- MARK MY WORDS -- I will Knit Like a Latvian (Mittens!) this year.

Macrame.  I am also going to do something beautiful using the much-maligned craft of macrame this year.  I can't ever complete my ongoing quest for knitting books (Aran Knitting being the Holy Grail) at a thrift store without running into a number of macrame books and I've got a soft spot.  I used to get all nostalgic and buy them, but it has to be pretty special to come home with me now.  "Textiles" was a very popular class when I was in high school, and that pretty much meant macrame.  (Now, they hardly even sew in Home Ec -- I know, it's not called that anymore, either -- and Textiles in the Art Department?  Kids aren't interested; they're lucky if they even have any choices beyond Drawing and Painting in the Art Department.)  One of my sisters did a couple of enormous, award-winning, 3D macrame hangings -- one of them was embellished with ceramic medallions she'd made; when the hanging was later damaged in a flood, I used the ceramic pieces in a macrame project of my own. I also used to make macrame plant hangers in the summer that my stepmother sold at her fabric/craft store (I knit girls' angora caps in the winter).  Several years ago I acquired a "new edition" of Therese de Dillmont's "Encyclopedia of Needlework" (but trust me, it's old) and will you just look at that macrame?  I've got to find something that needs an edging! 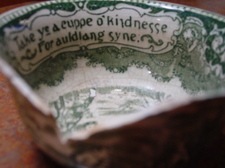 Midnight.  As the ball illuminates tonight, I'd like to wish you all a very HAPPY NEW YEAR!!  I wish I could *clink* glasses of bubbly with you, give you hugs and kisses.

At midnight, of course, it will also be THE January One -- you know the one.  ; )  Happy, Happy Birthday, my dear Cara!

Ah yes, that cup! How appropriate to the occaision. Happy New Year, Vicki!

I want to attend Knitting Camp, too.

I love you and wish you the best freaking year ever!

Happy New Year, Vicki! Your blog is "M"arvelous. And while being a "M"om is great, being a "G"randma is a million times better. Actually, my granddaughter calls me "M"emaw"!

Happy New Year, Vicki, to you and yours!

Happy New Year to all at Chez Knitorious!!! What a Magnificent post!

You're a dear blog friend and I always look forward to your posts, even if I don't manage to comment as much as I ought. ( A New Year's resolution for me... quit lurking so much!)

Happy New Year!! I wanna go to knitting camp too.

Happy New Year to you Vicki!
I can't wait to see your Latvian Mittens--I love them and have never attempted them so I'll be wanting to see yours...

Happy New Year Vicki, I'm so glad that I found your blog. :)

That quotate button did keep me for far too long, thanks for sharing!