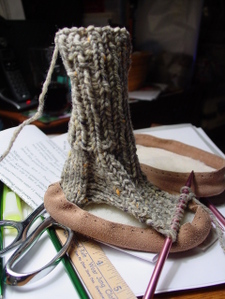 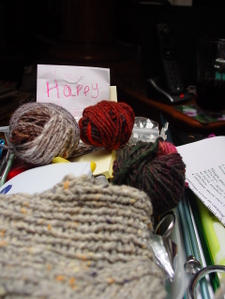 I'm making Mukluks for my nephew Mack -- they're Mackluks!  Yukyukyuk.  I know they're not really Mukluks, they're slipper socks with suede soles, but "slipper socks for Mack" doesn't humor me as much as "Mackluks."  Please.  This week, it's all about finding, keeping, creating, and holding on to good humor -- holding on for dear life at times!

I also have a pair of soles in DH's size, and will knit them next.  In keeping with my no knitting for Christmas, except for Mack (and there seems to be a foot theme for him this year, with the Christmas stocking and now Mackluks), hubby's will be a birthday present -- on the 26th.  Katie will get some, too, but only the soles and they'll go in her stocking as-is because she wants to knit them herself!

The first Mackluk was knit during the Packer game and discarded shortly thereafter (it's in the foreground of the photo on the right).  The seaming wasn't going well (I know, it's a wee sock, how hard can it be?), and then I discovered another small error -- well, small only in that it was a one-stitch mistake, but to have 8 stitches instead of 7 on a project of this size, well, it can actually be quite big.  I was also a little concerned about the cast-on edge at the top of the cuff and that it might be too tight for Mack's chubby little calf.  I thought, why oh why am I seaming this stupid little sock knit on two needles?  I got out the DPNs.

I knit the second version -- on the left -- during Sunday Night Football.  The casting off actually occurred just a few rows later.  It was a little tight with only 26 stitches on the DPNs, but the cuff is so much nicer knit in the round.  Then I did the heel, casting off as instructed, before picking up the gusset stitches on the first needle, keeping the instep stitches on the second needle, and picking up the second set of gusset stitches on the third; I did the knitting -- back and forth across three needles -- with the fourth.  Once the gusset decreases were finished, I set aside those needles and completed the instep on the last needle.  Tomorrow night, the second sock of the second version and then the sewing.  I don't remember the yarn -- I bought it ages ago, had about a dozen rows knit for a hat and it's been sitting forever -- they're a little tweedy, perfect for Mackluks.

On the right, the remainders of three balls of Kureyon after knitting one Lizard Ridge square with each ball, then another square using all three, and I wonder if I can get yet another, possibly not even worrying about when to make the designated change.  I found a surprising tie in one of the balls as I knit earlier, with a completely different color tied in, and I didn't mind at all how that turned out -- having a drastic color change right in the middle of the repeat.

Your work space looks 'happy'. It's full of yarn and the little paper with the word just makes it all very fun. Keep laughing, grrlfriend. It's the only way to get through this season.

Wow, those MackLucks are ambitious! It's good you were doing a project that didn't matter so much with the Kureyon color change.

Cute slipper socks for Mack, Vicki. If I may ask, where did you find the soles? They look like they are lined---I like that.

I love big thick squishy socks. They looks so yummy.

Wow! You've been knitting up a storm haven't you?

Lucky Mack! Sounds like you're having a ball over there!

I think Mackluks is very appropriate and appreciate the yuk factor.. you sure would fit in well around here.

Go for it with the Kureyon...you can be all zenlike. :) With kids stuff--usually sleeves and necks--I go up at least a needles size (sometimes 2) and K2tog, put it back on the needle around. It makes for a very loose cast off.