Every which way, but not so loose 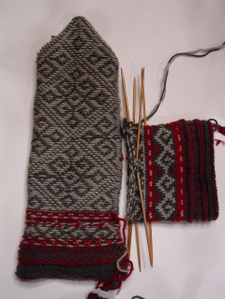 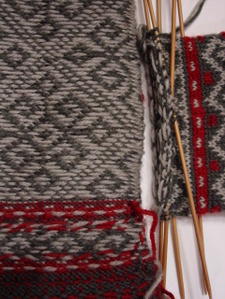 Upside down
Boy, you turn me
Inside out
And round and round

I spotted another difference between the mittens and contemplated ripping for about two seconds, but it doesn't bother me that much.  I'm always going to smile about the differences now, anyway, with the upcoming contest and all. On the menu this weekend:  Chocolate Bread Pudding.

Once upon a time, my mother was a single mother of five, going to nursing school full-time and on welfare.  We ate a lot of bread pudding for "dessert" in those years -- and washed it down with "mixed milk," but that's another story.  It's funny that none of my siblings remember bread pudding quite so vividly (and horridly) as I do, but there you go...  We all take note of and remember -- are tortured by -- different things in life.  (I have a similar view of ring bologna, shared by at least one sibling, and that seed was planted even before the divorce.)  So, for a long time -- many years -- the thought of bread pudding made me wanna barf.

Add a little chocolate to the ingredient list, though, change the bread from plain old white to cinnamon-raisin, throw in a little distance (30 years ought to do it!), and I'm willing to revisit Bread Pudding...  YUM!  We had it first with a little vanilla ice cream.  The second time, I sprinkled on a few more chocolate chips.  ; )

Your mittens look really great, Vicki! Someday I will make a pair like them … someday … and when I do, be prepared for my questions! ;-)

The bread pudding looks delicious – anything with chocolate, cinnamon and such is good in my book. I hear you though about how certain foods, and even smells, etc., can leave a bad taste in your mouth (for lack of better words) for a long time.

Funny how those food memories are made; there are a few foods my own kids won't touch, having gone through a similar stint of poverty-stricken single motherhood with me.

It's also pretty dayum nice with a buttered rum sauce on it. Something I suspect you wouldn't have had as a kid!

Food memories are powerful things. Mine are mostly good, thankfully. My mom was a good cook and I started baking very early in life. The only bad ones I can recall now are associated with morning sickness in pregnancy. It was a rare occurance so those items really stand out.
Funnily enough I've never had any problem with chocolate desserts!

I love bread pudding of any variety but I've never thought of adding chocolate. I'm willing to try it, though!

I love bread pudding. In fact, I also make a savoury bread pudding and had one last week with carmelized onions, French bread, cheddar and Swiss cheese and a good salad! Yummm!
Chocolate makes everything good!

The mittens are looking lovely. Oooo, and that reminds me that I should make some cinnamon swirl bread soon. (It is one of the few things that I can make ;)

Ohhh, I could easily turn into Jabba the Hut eating bread pudding. I love it so much that I used to make it every Friday night. This was also a time when I was steadily gaining a pound a week. I'd rather not do that right now, thank you very much! (plus, I try to be gluten-free as much as possible.)

Inside out even, that mitten looks good! Contest? What contest? I leave the blogs to whoop it up for a few days and I miss a contest...?! I don't think I've ever had bread pudding, chocolate on cinnamon or not. I have had bread, butter and sugar, though. Yummy childhood memories.

You are just ebil EBIL I tell you -- My aunt used to make choc. bread pudding and you know I have to make some this week now don't you...I'm not easy to influence or anything -- I had to have Pizza because of a thread on Knitters Review now I must have bread pudding... **sheese***

btw couldn't quite bring myself to call you evil so ....

hmmmm, looks yummy, cinnamon and raisin bread pudding is good with pecans and toffee sauce too.

Bread pudding is one of my favorite foods! The second mitten shows how much you have improved with your technique. You're stitching toward perfection;-)

Inconsistencies and all, those mittens look great.

Bread pudding, see it always makes me smile because it makes me think of cooking with my dad in our little humble kitchen. To this day my dad is still trying to perfect his bread pudding technique. He talks about bread pudding the way some people talk about fine wine...

Makes me want to stand up and sing "walk like an Egyptian" right here in the office. Too many muggles right now though. ;)

Huh. I have never thought of chocolate bread pudding. And really, I shouldn't even think about it now!
:)

Looks good to me! My nemesis was tuna. Was forced to eat it by a babysitter. Took me about 30 yrs before I'd it again too. Yep, 30 yrs does it;)

OMG. I nearly jumped out of my seat when I read that your mom was a single mom with five kids getting a nursing degree. I'm a single mom of five, and I got my nursing degree last year, after spending three years going to school, working two jobs, and raising my kids! Being able to support my family is an amazing feeling!