My other new favorite word is... 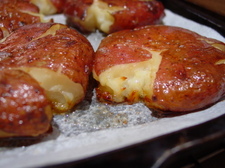 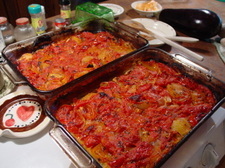 ROASTED (often found within these pages in close proximity to the word "delicious")!

On the left, Susie Middleton's Smashed Roasted Potatoes (updated to update link, Aug 2009), from Grace Howaniec's (now defunct) column, "Grace Before Dinner."  I haven't been steered wrong by Grace yet and these were no exception.  Admittedly, I'm a huge potato lover -- Potato Soup (with leeks or bacon or ham or anything -- or without), Potato Pancakes, Mashed Potatoes, Smashed, Baked, Fried, French, American, German, Salad, Scalloped, Au Gratin... you get the picture.  I've even had lefse, thanks to my Norwegian (not wicked) stepmother -- and love it (however, not so the accompanying lutefisk -- that was rather wicked)!  I think my potatoes were a tiny bit big and I forgot to flip them half-way through the cooking time, so they were a little less crispy but absolutely delicious! I will definitely make these again (possibly with a little less and/or a lighter oil, possibly not).

On the right, one of several batches of Peace and Sereknitty's Roasted Tomato Sauce that I made late last summer.  (It's a very pretty scroll down on that last link, almost to the bottom, for the recipe.)  I'd used it freshly roasted a couple of times, but put up most of it in the freezer.  On Monday, I used some in place of the usual store-bought can of tomatoes for lasagna and it was dee-licious!  I don't think I'll ever be able to use canned again.

This weekend I plan to make Carole's Roast Beef Soup, which not only looks delicious (and has been bookmarked on Bloglines since that day, so it's the first thing I see every day when I check her new posts), it also comes highly recommended by Ann -- no culinary slouch, either, that one.  Meanwhile, Carole has also recently posted about Cream Puffs and now a recipe for Artichokes French!  I have been twice to Rhinebeck, twice in the line for Artichokes French (shared them once with Carole herself) -- they are absolutely delicious and now I can't wait to make THAT recipe, too.  ; )

For those of you interested in the knitting:  I am working on the bottom part of Williamsro.  That's my official UFO project for February; St. Brigid's new cuffs are second runner-up.

I cannot let this day pass without mentioning my brother, Michael.  I've been extra emotional this week -- Michael on my mind more than I realized, I guess, my aunt's memorial celebration coming up this weekend, the death of my best friend's mother on Monday, some other things...  It was one year ago this morning that I spotted the emergency medical transport helicopter in the sky on my way to work -- unbeknownst to me, it was on the way to the scene of an accident that my brother was so very lucky to have survived.  Brain surgery that day, back surgery on his birthday/St. Patrick's Day, and several weeks in a coma later... well, he will never be pain-free, will never feel exactly the same, but... he is so amazingly here and with it, walking and talking, alive and well.  And tonight, I hope he will be feeling NO PAIN, rocking out and celebrating life with THE RED HOT CHILI PEPPERS!  Rock on, bro!

Bob Woodward's "To Iraq and Back" on ABC last night struck some chords.  Wow.  I can't find a direct link, but it's available to watch online.

The love and support that I felt from the blogging community at that time was indescribable and indispensable.  I later printed out all the posts and comments from that time to share that with Michael and his wife.  And I was honored to wrap him in the knit-blogger blanket of love, all those heartfelt squares so beautifully sewn up by Christine.  "Thank you" never did (and never will) seem like enough for any of it.

And yet, before I end up in tears... Thank you, again.  Yay Michael.

Birdsong and her family could use some of that indescribable support right now.

I'm a happy recruit in Norma's Army in the battle against rudeness -- first spotted at Cara's, recently at Stephanie's.  I'm wearing garlic, myself, and hoping that the March lion blows in bearing manners in abundance.  Yes?

Thank you for reading, I think I'm finished now.  Whatever will I blog about tomorrow...

Aw, what a great post. Yay for your brother Michael! Though it's so unfair he gets to see the Chili Peppers (no babysitters to be found!). Those smashed potatoes look so yummy, and I'd better pull some of my sauce out of my freezer- yeah, I'm addicted, and will be making tons more this summer.
Have a great day!

Sounds like your brother is doing well. We had a similar experience with my sister who got TBI from a car accident 3 years ago. (She is also doing well now). A friend and her daughter saw the transport helicopter fly over their yard...to later realize who was on it.
I enjoy reading your blog.

Dear Vicki, you know you'll think of something for tomorrow, who's worried?
Ah, those recipes sound so good! I'm a big fan of roasting.
Happy RebirthDay to Michael. That's what a former boss called her anniversary of the devastating car crash that she survived. She always celebrated it as a very significant milestone in her life.

I am glad your brother is doing better Vicki.

You always feature the most beautiful deliciousness on your blog. I love it!

It's a great milestone for your brother, and what a great way to cap off a year post-accident, eh?

I've got that artichoke recipe of Carole's bookmarked for a try myself.

It's so wonderful to hear a Michael update. Thank you for sharing the recipes. I'll be stopping by the grocery store tonight for little red potatos...they look so good.

I think that's the link to the online version of Bob Woodward's show. Definitely an eye-opener.

If you have any of those potatoes leftover, send 'em my way. I've also not met a potato dish I didn't like. :)

I hope Michael has a fantastic time at the concert, its good to hear he is doing so well.
I recently used the last of my roasted tomato sauce,I only have a little freezer, it was so good, I must make more.

Vicki, we were channeling each other again! I was just saying last night that potatoes are the most versatile food ever. You can cook them so many different ways and they always taste different. And fabulous. I love me some potatoes. Especially mashed with gravy. Mmmm. But those roasted red ones look fabulous. Thanks for the shout out to my recipes, grrlfriend.
As for Michael, it's hard to believe it's been a year. The blessings you were able to find in the midst of that tragedy are the parts I hope you'll remember most. Hugs to you, my friend.

Thanks for the Michael update. It is hard to believe it's been a year -- although for you, it probably seems like a decade. I've got one jar left of the special roasted sauce that you inspired me to make last summer. Mmmmm, sounds like a good dinner idea. Thanks!

OK, I am ages behind in my blog reading and just manage to keep the number unread somewhere under 200 as this crazy busy week sneaks past me but I had been meaning to come over here and look up where that sauce came from because I made one batch with the last of my boxes and boxes of tomatoes from the Farmers' Market last summer and played around with canning them and was supposed to report back -- well the first one was opened this week to throw on some whole wheat pasta with a little sharp cheddar (can't seem to make it to the store either) and well -- it was absolutely fab and the bit of lemon juice I added for acidity didn't make a bit of difference -- summer bounty in the winter -- yum. Better head over and share with Peace and Serenity (serindipity is this post)

I'm glad to hear that your brother is doing so well.
I love those potatoes, I have a similar recipe, which adds sprinkling the tops with a bit of fennel seed and fresh thyme leaves before roasting (you don't turn them). I've served them as appetizers at parties, and they just disappear. Yum. Now I'm hungry.

I started to write to you so many times when you wrote about Michael's injuries and recovery, but I don't believe I ever sent the letters. I wanted to offer comfort, but wasn't sure that my brother's story would really do that. He suffered a brain injury in 1990 when he shot himself. Miraculously, he not only lived but he thrives. He has certain significant deficits -- he thinks quite literally now, and is likely to agree with you even if he knows better -- yet retains his full I.Q. and ability to reason. And his depression was erased. He is a very happy person -- not quite able to live independently or hold a job, but nearly so. He lives with my parents and is a great help to them. I am thankful every day for the miracle of his "second life." God bless you and your brother and whole family, and I am so happy he's had such a good recovery.

I've just eaten dinner and those potatoes have my mouth watering! Yummy looking. Go Michael! How wonderful that he is around to enjoy life and family! I enjoy the long posts -- whenever they appear, Vicki. Maybe this one will just be a primer for more? :-)

Good on Michael, I'm glad he's well.
Big Alice (bigalice.blogspot.com) posted a list of things she likes the other day, and I coopted it as an opportunity to battle negativity. Make your own list and tell me you're not grinning by the end.

Thanks for smashed potato link, I think I'll try them!

Tried the smashed potatoes tonight - they were delish! Crispy, tasty and simple, definitely a make-again. DH loved them, too. The smashing action was fun - the little spuds popped in a very satisfying way, like bubble wrap. Thanks, Vicki!