Skimming the archives
March Madness (of a different sort)

A study in contrasts

The mittens and I are thinking things over.  I have resolved the how-many and how-to pick up stitches for the thumbs and have even begun to knit one.  I'm not sure it's big/wide enough -- or maybe I'm knitting too tightly on such a small circumference.  There are plenty of things to think about.

Meanwhile, I found the 4x5 negatives of the photos that Cousin Char is seeking.  I'm sure I had extra prints made, but either they're stored elsewhere or I gave them all away.  According to the photo finisher's envelope, that was all the way back in 1992. 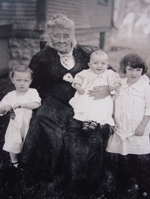 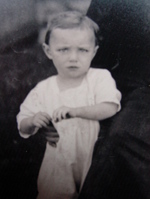 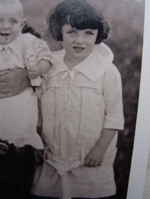 This is one that she requested, and it's one of my favorite photos ever (yes, there are many) -- there are so many reasons why, but mainly... 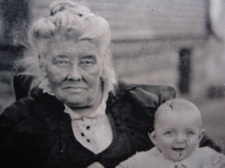 Meet Sarah Nutting (Drake) Hopp, my great great grandmother.  My grandma (far right in the photo) called her "The Methodist" -- not just "A" Methodist, Sarah was "The" Methodist; Grandma, herself, was only "A" Methodist.  Yeah, when Sarah was around, she ruled -- whether it was her true domain or not.  No card-playing, no dancing, don't even think about drinking.  What a presence she must have been.  She scares the shit out of me even now.  And yet, I'm completely mesmerized by her and if time travel is ever possible, she's on my list.

That's little Harry on her lap, happy as a clam  -- oblivious to the force that holds him.  Charlie, on the other hand, is feeling it -- he isn't giving off much of a warm-and-fuzzy vibe.  A wonderful study in contrast and body language, those three.

Harry was born in late 1915, so this must be summer 1916, in Mason City or maybe Brooklyn, Iowa, probably just before my great grandparents moved their young family to the farm in central Wisconsin.  Sarah would have just had (or maybe this was) her 70th birthday.

She certainly looks formidable. I love studying old photos like this!

Oh my...she is a force! I'd have run screaming. It is wonderful to read your 'reading' of the photos.

Wow, what a battleax (in a good way!) She looks like she'd take out a tornado if it threatened her family. Do you think Charlie was upset about being so close to The Methodist, or for some other reason? Even though he looks crabby, he's still leaning on her knee, like he knows she's gonna save him from the Big Bad Scary Camera.

What a FANTASTIC picture! You are a treasure trove!

There's a picture of my great-grandmother somewhere - the one I'm named after - and MAN is she scary!

That picture is fabulous, she sure is very scary looking.

I love old family photos and the stories that go with them. I have a great greatgrandfather I would love to meet; he always looks so serene in the photos. I ran across a bunch recently. I need to frame them so I can look at them regularly

Wow. What character on her face! And the kids, too. So fascinating to see people we've always known as "old" in their own early childhood.

OMG Vicki!! how have we managed to overlook yet another link - The Methodists!

These photos are precious. We hardly have any in our family. Sad, really. I love going to auctions and estate sales, etc., and poring over the old photos, even if I don't know the people.

What a fantastic picture! Thank you for sharing :-)

I love that picture, Vicki. You can practically read her whole life story right there in that one gaze. Fascinating.

The Methodist! HOOT! I love your commentary and indeed that baby looks happy as a clam ;p

Hey Vicki... are we sure the Methodist isn't pinching little Charlie? BYW...My mitten has sets of braids for the cuff now! They are so cute!

I always loved looking at the old family pictures when I was at my grandparents. I only wished that I had asked more questions about them.

I wouldn't make her angry on a bet! Fascinating photos to have !

Vicki that is so cool! I love old pictures and could stare at them for hours...

It is wonderful to have pictures of generations past. As I was looking at the photos, it occured to me as it probably has to you, that you can edit the pictures to take out the spots and other distortions in one of the photo programs on the computer; save the original, but still have the benefit of a beautiful picture of your grandma and family. By the way, my mother's family in Kansas was Methodists.

Wow, my grandfather moved to a farm in Central WI a few years later from Maquoketa, IA!

I looooooove those photos. They're awesome. Isn't it wonderful to have things like that around? I have that on one side of the family. It makes me miss the other side (who also happened to be from Iowa)

whoa!....that I believe is also my ggg grandmother!