Back to me
So close in so many ways 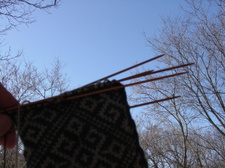 The sky is blue, the sun is out, the snow is definitely melting -- and fast!  Sorry about the lousy mitten picture, but the morning sky sure looks nice, huh?  I have renewed focus on the mitts and have begun decreases!  I think I will have a finished pair just in time for next week's forecasted 50 degrees.  ; )  Timing.  Much as I hate to say it, though, I'll probably have opportunity to wear them yet this season.

With all this melting, ice is a real danger.  I mentioned to DH this morning, as I brought in the newspaper, that we should sprinkle salt on the bricks leading to the front porch.  They ice up all the time, anyway, but especially now and there's the double-whammy of being in the north side.  I am more and more fearful of falling, slipping, tripping.  As I read the paper this morning, I came across a notice about a man -- who I may have met once, whose wife I most certainly have met and DH knows -- who slipped and fell on the ice outside his home yesterday.  He hit his head and he died!  I've already been out running a few errands today and, along the way, noticed a woman walking in the street rather than on the sidewalk -- hazards of another sort, but hazards all the same.  Anyway, I contemplated a walk outside today, but maybe I'll just find something puttery to do in the sunshine.

Speaking of walking...  I will not be making 100 miles in any way, shape or form by April 1st, so I took that button down from my sidebar.  I have been biking on the recumbent, walking a few laps on the track at the Y, and, on Wednesday, I finally tried the treadmill again.  I'd been suffering from shin splints so badly, that I had to stop a while back -- I was looking rather like Festus, dragging my foot along.  Pathetic.  On Wednesday, I felt only the very smallest of twinges.  I was careful not to overdo, and also paid attention to both my step and my stride.

When I opened the door last night, I knew instantly that there was pie in the oven -- apple.  There was a little dish with raw pie crust scraps waiting for me.  I tried to take the picture without being noticed, while DH was out flipping stuff on the grill, but he caught me.  Hello, I'm a dork.

I hope my sister has a girl.  Not only do I have Miss Dashwood waiting in the wings, now there's Monica.  I love the new Knitty!  Torque is fantastic, Isabella intrigues me, More Stripes... there are some great patterns!!  Theresa's article, Recycle-Reuse-Renew, is very timely for me -- I have a couple of projects headed in that direction.  Soon.

Glad it's warming up some; sorry it's causing ice trouble! That's horrible about the gentleman who died! Please be very careful out there!

Um, I think it was Chester, not Festus, that had the limp. Are we dating ourselves or what?

Our ~block-long driveway, mostly uphill, still has not been plowed from the blizzard of over a week ago (broken snowblower). The 2-ft wide path that did get plowed is now glare ice about an inch thick. My son sanded it this morning before I attempted to walk on it -- he knows how I fear falling.

If you worry about salt near your grass or garden, I use potting soil to sprinkle on the ice - it gives traction, the dark of the soil attracts the sun when it comes out and then you can just sweep it into the garden or grass area when all the ice is gone.
I copied Isabella to knit from a 'lipstick pink' that I bought on sale. It is Canasta by Phildar and they actually call it Grenadine!
Hope Spring arrives soon!

It's melting like MAD here, too, and the ice is a problem. You and I are too similar: I fear falling on the ice something awful. All winter long, with all the equipment I schlepp, I inch along like a little old lady, but I don't care! All the time in my work, I hear of people falling, and sometimes the consequences are not pretty. And even the other day when I was making my way in to the building at UVM, a young girl fell right beside me. Don't ask me why, when it was 5 below zero and snowy and icy as all get-out, she was wearing ridiculous ballet-slipper-like shoes with no socks. I felt bad that she fell, but I was mentally pissed at her for wearing something so stupid. She seemed more concerned about who saw her fall then any of the rest of it. I bet she had one hell of a bruise, and maybe even something sprained or broken. And a wet ass and ice and snow inside her shoes. I wonder if she wore boots the rest of the week? I'm so mean.

I'm also afraid of ice...I've fallen plenty and don't need ice to make that happen! I gave up on the 100 miles, too. I'm working up some motivation to get back to the gym but it's slow going. Pie...mmmmm, wish I was there;-)

I'm a lurker on your blog, but I thought I'd comment today. I love your mittens! I hope your sister has a girl, too. I recently had a girl, and girly knits are so much fun. I too might knit a dashwood, but probably not until next winter.

I worry about the ice this time of the year too.. but more about it sliding off a roof and conking me on the head.I once read a book called Range of Motion, by Elizabeth Berg (great book).. where her husband went out for a jog in the early spring, and got hit on the head with falling/melting ice that came off a roof, and was in a coma. yikes. It's safer in the street.

Oooohhh....I feel your shin splint pains all the here. I know I won't make 100 either by April, but I'm trekking along, just a little slower, Maybe 100 miles by Christmas...lol