Not only did I make Carole's Roast Beef Soup on Saturday, I invited people over to help eat it.  Yes, it's true, I often spring first attempts at new/untried recipes on unsuspecting friends and relatives.  I was pretty confident about this one, though, and an offer of a free meal with no strings (no prep or clean-up, nothing to bring), usually yields a couple of willing guinea pigs -- you'd come, too, wouldn't you?  The invitation was designed to spur motivation to clear the kitchen table and surrounding area!  Man, it needed it -- stuff piles up so fast around here -- it's amazing how big the dining area looks when all the crap is put away!  The soup was fantastic, quite simple to make, and it received highest possible "requested recipe" honors!  My favorite part of the making was deglazing the pan.  (It's the simple things.)  Next time, I'll add a few more carrots and use a little less water -- maybe 10 cups instead of 12.  Next up: Artichokes French! 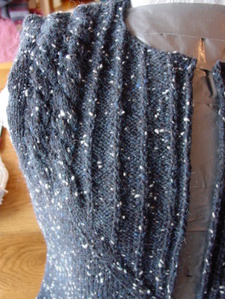 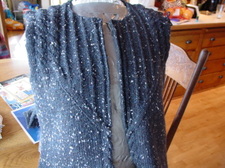 Recently, it's come to my attention that certain parties (who shall remain nameless, but who live a fair bit east of me, whom I have had occasion to visit, attended fiber festivals with, went shoe-shopping with and/or played catch with their dog and its ball-thrower-thingy) have no idea what I'm talking about when I refer to Coup d'Etat (scroll down, it's there) -- Is someone trying to overthrow Vicki's knitting?  Just for them -- and any other nameless readers with questions marks floating over their heads at the mention -- I have searched and categorized every post wherein "Coup" is mentioned and -- yes, I know, a coup is not often peaceful, as you're wont to think when you see "Peace Fleece," but it must be thus named because of the historical significance to Russia, don't you think? I don't name 'em, I just knit 'em -- so there is no mistake, I've also re-posted the best pictures.  It's a bugger to take a picture of that nearly-black sweater.  Alas, projects do get pretty drawn out around here sometimes.

Anyway, got it, darlings?  It's the other topic du jour.  When last we left the poor, unphotogenic Coup d'Etat, the threat of underarm gussets was on the wind.  After a short period of separation/marination, I tried it on again last night and I don't think gussets will do the trick.  That is one tight fit under the arms, fitting about as close as I'd want a shirt, definitely not a sweater.  I think I'll remove the sleeves and determine whether the armscyes are of adequate depth -- there was a bit of easing the armscye to the sleeve during the seaming -- and if they are, ripping and reknitting the top of the sleeve.  If the armscyes are too short, I'll probably undo the shoulders and knit another inch or so (*sigh* and re-do the sleeves).

Or maybe I'll rip the whole darn thing and start over.  It fits okay, but it's not really what I envisioned -- thinking that the waif-ish model in the photo was wearing "her" size (not "my" size), I completely glossed over what the significance of the numbers (sweater measurements) and was expecting something a lot roomier when I knit the largest size.  I'm not upset, just a little disgruntled that I fell for it... again.

Why oh why do they do this to us so often. You'd think we'd learn...
It looks great and might be worth a little fix in the armscyes. Hope it stays a 'little fix'. Don't you wish Ann would read once in awhile? She probably thinks I had waffles again this weekend. :-0

Nice sweater, by the way.

Yes, indeedy. I think we should stage a revolt (to whom? I don't know) about this! Hit the streets of New York demanding true-to-size models for the knits? Demanding to know if they pinned it the back! What ever.

However, I do tend to be so excited about finishing the thing that I think I cheat a bit in the armscyes, and I need to watch that in the future. It says to knit for 8 inches, and I go, "Oh 6 and a half? Close enough! Let's bind this sucker off!" Haha

That sure does look great on the dress form, though!

It looks better on your dress form than it does on the model on the PF site.

Oh dear. If the largest size doesn't fit you that I am certainly doomed.
Glad you enjoyed the soup!

Darn. When I made that soup, it turned out a watery, thin mess, and I only used 9 cups of water! So sad . . . I'm glad yours worked out, though!

Deglazing is sooo cool! I have admired the Coup pattern through years of Peace Fleece brochures, but didn't figure I needed another heavy wool jacket, as my winters are milder. I personally must say I have been following your progress with interest, NOT like SOME... just sayin'

The soup sounds delish! I *will* bring homemade bread if you make it again. :-) Such fun comments for this post, lot'sa love floating out there.

Glad I'm not alone on having stuff pile up fast around the house;) I love to deglaze! Your knitting is looking really nice! I can't spell Coup d'Etat...

A friend of mine said to always try out new recipes for company so if you don't like it there will be others to help finish it off. Risky. I am going to make that soup tonight, thanks for the water reduction warning.
As for Norma's comment: I used to model and honey, they ALWAYS pin the back!

your forgot to mention that when you searched your archives even typepad said "what?" ;)

now I am heading to Margene's to give her grief.