Saturday sky through pergola
It's all downhill from here 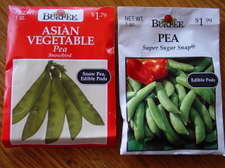 Madeleine is a big fan of the edible pod and I finally remembered -- in March -- that March is the time to plant peas!  I planted two of the three pergola planters with peas and I'm thinking of clematis in the third -- the way it's situated, the plant would get plenty of sun and its "feet" would be naturally cool (they way they like it) because of the orientation.  I originally thought I'd plant tomatoes in these planters, but it's not working out that way.  Sometime in the next two months, DH and I will make some kind of raised planter thingy on the back side of the southern-most pergola bench, and I'll plant beans -- eventually, it will make a leafy bean curtain behind the bench.

We broke records yesterday with a high temperature just shy of 80 -- both the temp and the humidity rose very quickly in a short period of time yesterday afternoon.  There were tornado watches all over our area and even a few warnings.  It's too nice a day today to be stuck behind a desk, but here I am.

I've only just posted the ninth installment of my 100 Little Things project -- there should be about twice that number at this point -- but I have some things in queue and I'll be doing a little catch-up over there.

I washed and blocked the Baby Cashmerino V-neck sweater, wove in all the ends, did a tiny bit of seaming (remaining shoulder, one side of each pocket flap).  I guess my heart wasn't really in it.  Again, I am reminded, there is as much finishing in a baby sweater as there is in an adult's -- you'd think it would go quicker because the seams aren't so long, but it doesn't.  Once the mattress stitch gets set up, the length of the seam doesn't really matter.  It must be the threading of the needle that takes so much time.  ; )

The tattoo jury is still in deliberations.  Thank you so much for all your advice!  You'll be among the first to know when a verdict is reached.

Fresh peas are a wonderful thing - good luck growing them!

Hmm . . . isn't spring simply divine! I am with Madeleine and the pea pods. If I can keep the pesky rabbits away. Tatoo, actually I am 47 and contemplating a tatoo. I was going for an outline of Madeline Island. How about the knitting bat signal?

Yea peas! We're actually not planning any peas or beans this year, but we are planning a rather large veggie garden to be shared with some friends and I'm ordering all the seeds and plants today. We'll have to build the beds in a few weeks (literally build them) so we didn't want to do anything that would need *too* early a start! I'm also a bit farther north, so I think we'd still have a couple weeks to get peas started if we wanted them. :)

Baby bleeding hearts, way too cute, can't wait to see them grow up. Its cold here today not quite sprng like.

I bought seed packets for radishes and herbs. For whatever reason I think peas would be too difficult for me. I tried tomatoes one year and it was just an ugly experience (bugs.).

I like the idea of getting a tattoo, but I have no idea what I would want emblazoned upon my (usually very well covered) part or parts for perpetuity. I like the idea of something Celtic though...can't go wrong with that, right? I am looking forward to your decision! i am living vicariously through you!

Peas!?! Oh woman, am I behind the curve all ready! Ha! Maybe that's why my peas didn't do so well last year when I planted them in May??? I'm not a tattoo person but if you want one, you should do it. My SIL has a very nice one of a flower and leaves on her lower back just where you would see it if you had a shorter shirt with hiphuggers...low hiphuggers.

Extreme changes in weather for sure! Have fun planting!

the peas and broad beans are already in and other little plantlets have been raising their green heads out of the soil inside. They are too tender to go outside before May.

Wow, 80 degrees. I remember last spring on your blog, and the bleeding hearts. Thanks for keeping the cycles going.