There was a thunderstorm last night!  It was a real show with lots of lightning and low, booming thunder that went on and on, all accompanied by plenty of rain.  It was a terrific way for Mother Nature to announce the First Day of Spring!  That, and the birds have been singing to beat the band these last few early mornings.  It's getting warm during daytime hours, but still cold at night, so jugs and buckets are hanging 'round all the maples in town, collecting sap for syrup.  We're in for a fair amount of rain through the weekend -- with just enough sunshine to... well, she's throwing us a bone -- and I just love it because that means, when the sun does come out for a while and it warms up good for a few days in a row, the bleeding heart will blast off and spring will have sprung for sure.  Oh, I do love spring. 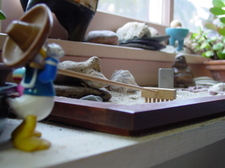 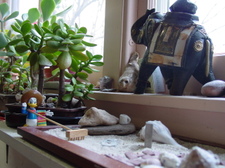 Maybe our groundskeeper will soon be able to find some raking to do outside.

I finished the first sleeve of the baby sweater at Knit Night on Wednesday and started the second.  Ann is the organizer of the group and also a new blogger -- she has some pics posted, though I shouldn't be pointing (I don't mind the group pic, but the close-up... *sigh*).  I believe it was the third gathering of the group, but only the second that I could attend.  There were a few faces the same, but also some different.  It seems like a lively and fun group is evolving, and I'm looking forward to knitting out more often.

Last night, during the "show," I finished off the second baby sleeve, knit the pocket edgings, seamed one shoulder (trying the crochet method touted by Bonne Marie), and knit all the neckline ribbing.  All that's left is binding off!  And blocking and seaming and sewing down pockets, but hey, gettin' close.

It's wonderful to see you knitting with others. Our SnB group is the highlight of my week and I had to miss this week...waaahhhh! It is also wonderful to watch the earth reawaken from its long winters nap. The birds and flowers light the soul.

We have warmer weather but rain and grey skies. I can't wait to for the first warm and sunny spring day!

I miss you! I just finished my first Lean Cuisine with extra vegetables. I couldn't find the Butternut Squash Ravioli though so I settled for some Teryaki Beef. Good thing they spiced it up a bit because I can't taste a thing.

I think after experiencing warm climes out west I need spring to come rushing through the New England region.

I missed wishing you a happy blogiversary, so belatedly, Happy Blogiversary! I love reading about your knitting, your life and your culinary adventures!

That must have been a delightful thunderstorm. Spring has definitely arrived around here too.

The knitting circle (knit night) wouldn't be the same without you! :) I look forward to seeing you... see you next time!

I love me some slip stitch crochet - it goes so fast - and if you make a mistake, zip - it's outta there.

Especially if accompanied by a spectacular thunderous storm...

You must be near me...we had big thunderstorms, too. (central WI) Poked around your blog and am loving your St. Brigid!

I love a good thunderstorm. Except less so when we lived on the prairies - they always came with tornado warnings. Still invigorating, though.

ummm...you looked great in those photos you nut!

Too bad that you only live about 5 friggin hours away, or I'd have to join that little group!