Who farted? What? The dreamboat?

...or When Will I Get My First Hearing Aid?

I often knit while "watching" TV, which means that I actually listen to the TV much more than see the TV.  When commercials for The Departed began airing several months ago, I could have sworn, one of the first times it was on, that it was Who Farted?  Now that would have been a much different movie, appealing to a completely different demographic.  I laugh about it every time a commercial airs.  (Who would have?  Survey says it could have been any of them -- everyone does it, just like you and me -- DeNiro, Nicholson, DiCaprio, Damon, Wahlberg, Sheen, Baldwin...)

One of my guilty pleasures, lately, is Dancing With the Stars.  I used to watch ballroom competitions when they were aired in obscure time slots, only on PBS and, years before Dancing hit prime time, I actually tried to get a group of friends together to take lessons.  I still think it would be a fun thing to do -- not to mention great exercise (much more fun than walking).  Anyway, the other night, while watching Dancing, there were a lot of advertisements for a new show, The Great American Dream Vote, hosted by Donny Osmond, which I heard as The Great American Dreamboat.  It may help to know that Donny was my pre-teen heart-throb -- the only one for me.  (And yes, even dreamboats do...) 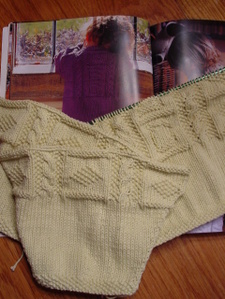 Guess what?  I've got knitting and pictures!  This is the ABC Sweater from Debbie Bliss Nursery Knits for which I'm using Rowan Handknit DK Cotton from stash.  I started with, and have finished, both sleeves and I'm closing in on the back.  It's a fun knit and quick!  The only change I've made is in the direction of one of the cables -- so that the right one twists right and the left one twists left, instead of both in the same direction.

There are several other designs in this book that I'd really like to knit and I probably have appropriate yarn in stash for some.  I'll keep this one for a while.

Oh, and I forgot to mention Iowa yesterday -- the Midwest Sheep/Wool/Fiber Festi list includes Iowa!  It was a lot of fun working on those lists, but it sure makes me wish I had more free time and money -- a lot more money!  Those festival sites are a treasure trove, by the way -- the vendor lists are a gold mine of little-known, but often extraordinary, producers.

I was going to grow up and marry Donny Osmond, you know. And I used to love to watch ballroom dancing on PBS with my mom. My favorite was the Fox Trot because I loved the dresses.

i wish i had heard that before i watched "The Departed".
I could have laughed through the little half nakey scene with Jack Nicholson.
Sorry if you haven't seen this movie--but I coudl have done w/out that image in my brain.
:)

DwtS and Amazing Race are the only reality TV shows for me. I hope it comes down to Apolo and Laila.

I would watch more ballroom dancing if I thought the backstage drama were more like _Strictly Ballroom_. Man, but I lurve that movie.

That's hilarious about the things you hear. I'm that way too, but I can't think of any humorous examples. Because, of course, I can neither hear *nor* remember anything. Charming, I assure you. ;)

At first I though....uh? Did I pull up Ann's blog? I just laugh and laugh when I hear that you (and Carole) were in love with Donnie? You poor things!
Love the new knit..who gets the sweater?

I used to love watching ballroom dancing before it became popular, when it was still cheesy, I watched it for the dresses of course! I made my mum watch it when I was home recently because we don't get UK tv here, she wasn't impressed.
Your hearing dreamboat for Donny was hilarious, when he was young he was of course, now not so much!

You know, I'd change the cable twists too. It is just one of those things that really bugs me, LOL! It looks quite darling and reminds me that I need to choose a baby sweater pattern here soon...

I had the Donny Osmond Barbie doll and I thought he was dreamy. I even liked his purple jumpsuit.

I really like your sweater and I love that you changed the direction of the cable to make them mirror images. I'm thinking of making a sweater from the "inspired cable knits" book and want to do that but not sure I can make it work (there are three cables on the left, three on the right and three in the middle...what to do with the middle ones has me puzzled.

I watched the ballroom dancing on PBS as a kid when I couldn't fall asleep, I was a fan of the waltz. I like the way the feathers would swish and the women's dresses. I really like the alphabet sweater. I like quite a lot of the Bliss designs, actually.

Oh, the ABC sweater is going to be fabulous.

My sister and I would sing our hearts out to Donny and Marie. I was always Donny. Sigh. Love that sweater. Simply gorgeous. I am dying to knit a gansey.

Purple and lavender were my favorite colors, because they were MY dreamboat's -- Donny's!!!

I think the title to that new show is a play on Joseph and the Amazing Technicolor Dreamcoat. The first time I saw it, I thought "dreamboat," too, though. :)

Donny was my heart-throb, too. My mother and grandmother indulged me and we went to see the Osmond's at the Wisconsin State Fair---way back when it was only puppy love. :-)

Oh! Donny Osmond! I lurve him. And he hasn't aged a bit. Still looks like he did on the Donny and Marie show (...and I'm a little bit rock and roll!) I think I'm old enough for him now. Donny and Bobby Sherman, he was my first concert.

But! Did you see that show? The remote was across the room and I was exhausted and lazy and should have been in bed, but really. That show was bad. Donny! You're letting me down.

I own a ballroom studio in Reno - it is highly addicting. It is what keeps my midline skinny with all the knitting :)

It was Marky Mark; Marky Mark farted. That funky dance was just too much for him.
I love that alphabet blanket pattern; good luck

The sweater looks divine! I'm still snickering over who farted? The movie though, was quite good! I'm now thinking of the Donny and Marie Show and all the others around at the time. Sure brings back good memories:)

I have those hearing aid moments all the time, and Dancing with the Stars? Totaly a guilty pleasure. But I hd to turn off the Great American Dream Vote. Over the top, as far as I'm concerned. Even with Donny Osmond.

Yummy cotton sweater! I am with you on wishing for more time and money, just to attend the festivals would be enough - I wouldn't even have to buy anything (well, not much anyway).