I want to be like Bron
A few things

...can't trust that day.  Before you know it, it turns into Tuesday! 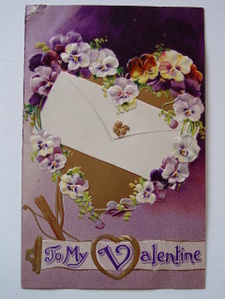 The antique show was nice on Saturday, but light.  There were fewer dealers with less merchandise, and attendance was down -- and getting old.  There weren't many young people -- not dealers, not customers.  There's been a huge shift in the antique market in the last several years -- who's buying, what they're buying, what they're even interested in -- one of those things that's hard to actually put your finger on and define.

I managed to find a few things, some of which I now regret spending money on, but whatever.  The doo-dad on the left is a marriage that's just begging for a divorce, but I loved the pansy piece and the whole thing was less than a dollar.  The Valentine postcard is just gorgeous and a very nice addition to my pansy postcard collection!

There were a couple of dealers with vintage pattern booklets for knitting, crochet and other needlework.  I found some of Marcella's -- that's my maternal grandmother's name -- and I just had to have one.  Mom said that when she was a kid, their mailbox would be full of leaflets like "Doilies" every month.  Marcella -- or Marstella (meaning "Mary of the stars" -- I love that, but she did not -- which is why she was known as Marcella) died when I was 8, so I didn't know her very well.  I definitely inherited her love for textiles and handwork, her rampant start-itis and it's companion problem with finishing, as well as the affliction with subscription addiction.

At home, the batik fabric for the top was washed and dried on Saturday, but has not yet been pressed.  (It'll be snowing here this afternoon, so there's really no rush to have a sleeveless tunic top.)  And with the joining of one shoulder during cast-off, I finished knitting the ABC Sweater.  I love that little sweater.  The other shoulder will be buttoned, so I shall soon get to dive into the button stash.  I'll be knitting out tonight, I think, and will either bring the sweater for sewing up, or work on the Latvian mitten thumbs.

I had a not-so-good weekend...

On Sunday, my (no-terms-of-endearment here) washing machine died.  Well, not exactly died -- I won't have to replace it -- but it does need major surgery.  It was full of soaking wet, heavy laundry and, after many attempts at resuscitation, it will not spin.  This is not totally unexpected, but I really thought I'd escaped, as it is a hard-earned 7- or 8-year-old Maytag Neptune -- a model with a long, documented history involving the words "class-action" -- action that I didn't get in on and yeah, well, too bad I missed out on that awesome settlement.  Pheh.

So, let's say the washer is a straw and I'm a camel.

Lots of straws have been piling up and I am down, down, down -- some of them are big and real (for real), and some of them are only looming large in my mind; quite a few of them are accompanied by a big "ka-ching" sound, some deafening.  It sucks.  Truth be told, I haven't really been "up" in a long time.  I keep trying -- there are little things, sometimes a glimmer, and I try to hold on -- but then I feel myself getting bogged down, dragged down, pushed down.  My confidence and optimism are smothered under all these damn straws.  If I wasn't still on a recent high from not smoking for two years, you can bet I'd be smoking right now.  That success is actually a little glimmer I've been successful at holding onto, but it's so-so-so-so-so hard sometimes.

I managed to get back on track and list a few items on ebay while, behind me, the washer began it's slow death.  If I continue the regular listings and get rid of some of the stuff, I'm hoping the straws will begin to fall.

I invite you to take a look at my current ebay auctions.  These particular things won't make much of a monetary dent, of course (I don't know if I have anything that really will), but it will make a little one -- and it's a start.  Little things grow.  This week, there are some oldie-but-goodie gardening magazines listed, including Fine Gardening (from 2001, 2002); some early issues of Garden Gate (including the Premier Issue); 8 issues of The Herb Companion from the early 1990s; and a couple of others in the mix.  Next week, I'll have some other stuff -- not sure exactly what yet, maybe some books... maybe something for Mother's Day... maybe some books that would be nice for Mother's Day.

As long as I'm in commercial mode, how about a little plug for hubby?  Artwork makes a nice Mother's Day gift, too.  Do you like the beach?  Does mum?  You can give her one.  Check out limited-edition and giclée prints at Oceans and Dreams, or some of the gift items at the Rusty's Beach shop.

Major appliance stuff stinks. I'm sorry you're feeling down. Anything I can do?

Grrl, I know just how you feel. Hidcote is the tip of my ice burg...the very tippy tip. Your additions to the Pansy collection are very cool! Do you think Antiques Roadshow and Ebay have hurt regional antique shows?

Sorry you're feeling down. {HUGS}

Sorry to hear you are feeling down, sending you hugs and good wishes.

One would think that appliances would be more reliable as a species. But, for some reason I have a knack for picking the ones that go belly up just after the warranty expires (this applies to cars too). Sooo frustrating. Worse - when the repair bill rivals what you paid in the first place GAH!
I do hope you're feeling better soon - knit a sock or something ;)

I've been in the dumps of late too. Lot's of stuff piling up over here as well and that ka-ching sound is loud and clear.

Focus on the light at the end of the tunnel, even if you can't see it. I just keep telling myself it's there!

Ah, the Herb Companion, I love that magazine! Terrible timing with the washer - right *after* the spin cycle would've been nicer... Here's hoping you find something to bring you UP again!

Vicki, sorry to hear you've been feeling down for so long. Maybe time to see the doc, for a checkup. Hormones can be little devils sometimes.

I seem to have the same luck with appliances as cursingmama does. I do all the research, try to buy the best value for my money and then they need repairs that cost almost as much as the original price, in 3 - 4 years. My Kenmore stove has not been my best choice.

Oh, sorry about your washing machine. I had the same thing happen with a front loading Sears washer that we paid big bucks for and only lasted baout 5 years. When it died it spun out a bunch of oil all over a full load of white clothes. There was all kind of class action suits with that one too that I didn't know about until it was too late. I hope that was the last straw and you are feeling better soon!

Once upon a time Maytag was a name you could rely on. Not so anymore, I am afraid I have one of about the same vintage (crossing fingers). Sorry you're feeling the dumps, and I know what you mean about the smokes. There have been a few days where if someone had handed me one, I would have smoked it right then. So far, I'm holding out. You hang in there.

I went through the major appliance thing in March. Now we have a lovely new oven because of it and couldn't be happier. But, as for the final straw and that down down down feeling, both Mr. Celia and I are suffering the same affliction. Overwhelmed, underappreciated, and ill-at-ease and kaching, kaching, KACHING! Feelin' your pain, Vicki. Feelin'it bad...

Oh, Vick, I'm so sorry for all this. I have been holding out ok, probably because of the stimulating change in my "new" job, but this is the time of year I normally get depressed. It must be a common thing....maybe because our stores have been worn down over the long winter.

My colleague has, three times, asked me, "What are you going to do with ALL YOUR MONEY, Norma, now that you are no longer paying tuition?!"

I finally said to her last week, "This is the third time you've asked me this (she must not have been paying attention the other times I answered!), a) we need a new roof, b) we need a new deck c) we need siding, d) we need to pay off some of the equity loans that we used for all that tuition e) we would like to retire someday, but it's not looking good, and f) we are probably going to be helping Abigail out substantially as she starts out in New York."

I think she got it, finally. Ugh. Life is hard sometimes.

Chin up, Honey. If there is any kvetching you want to do, give me a call, ok?

I'm sorry you're blue. I'm glad you expressed it, though. Wish we could *hug* you in person - no one ever gets all the hugs we really need.

I'll pile on with the hugs too. I think there was a major zodiac event for washers this weekend. My washer was making major weird sounds, your washer gave up the ghost, my co-worker's washer totally shut down like yours, plus the washer events mentioned by other comments. wild. good luck with the ka-ching events. Every little bit helps.

Sorry to hear the Neptune agitated it's last wave for a while. You heard all about my Maytag woes.
I'm similarly feeling weighed down these days. Hopefully the "renewal of spring" or some such optimistic crap will bite us on the --- soon!
Hang in there ;)