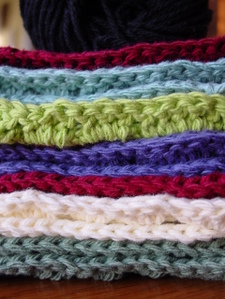 I've finished hooking all the Larger Than Life squares and have ends to weave in yet on about five.  I've been weaving in all along so I wouldn't feel as daunted by the ends in the end.

Color selection was more or less random for each square, except that there are two squares bordered in each color, and roughly two with the same color in the center and ditto for the "middle color", but there was no rhyme or reason to the combinations and so no two squares are exactly alike.

I'm going to use black for the joining and I want some of it visible between the squares -- reminiscent of the granny square afghans that my grandmothers might have made -- so slightly different than the pattern as-written -- and I have never crocheted anything to anything in a manner meant to be seen like that, so this is where I really learn something new.

I could not find the pale yellow I needed -- Sugar & Cream in any color or quantity seems mighty scarce in these parts -- so I ripped the edging off the one square I'd already done in that color and re-did it and another in off-white instead. 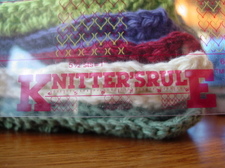 Last night I was reading my email and came across Cara's comment and *doink* how could I have forgotten the "Cease and Desist" letter that she got last December from the fancy schmancy sweeps lawyers, warning against using the two trademarked words that when put together mean "award tour" or "booty beat" or "present parade" -- the same words that we'd both used to title posts?  I heeded her warning, of course, and changed the title, made an addendum to my post.

It was frosting on the litigious lemon cake when DH came home, about an hour later, from a meeting of the creative minds at the co-operative gallery to which he belongs with news of a similar letter, though this from fancy schmancy lawyers of another sort, received by said gallery and accompanied by a screenshot of a post from this very blog.  I attended an art opening last month and posted pictures here, including one of an old candy machine, a permanent fixture in the gallery, which had been repurposed as and for art.  Uh-oh.  I had a comment to that post, too, which led to some editorial changes.

I have no problem with trademarks, copyrights or the law in general.  You know what?  I'm all for protecting creative property and rights and such.  I get it.  I'm married to an artist, I know how it feels to have shit ripped off -- the very shit you're trying to sell to make a living to provide for your family.  I do have other problems, though they're mostly to do with my own opinion about the purpose of things and their inspiration, and about things being particularly or singularly creative -- slippery, subjective slopes in my mind -- or that have possibly become, let's say, part of the vernacular.

In other news -- revolving door news (see also: emotional and hormonal issues; also parenting):  Ali will not be moving home except for this weekend (school's out for the summer on Friday!) and maybe for a little bit at the end of summer (more like early fall).  And, in addition to Seattle, North Carolina is also on her map of relocation possibilities.  Cluck, cluck.

I vote for North Carolina! MUCH closer to New Jersey. ;-)

I think your bag is going to be smashing, Vicki.

I have some pale yellow sugar 'n cream I'd be happy to send you. Copyright sure is a tricky issue - I can't seem to keep up with it.

The bag is gonna be a beauty! It's amazing how we can't catch certain individuals even when their whereabouts are known, yet knit bloggers can't sneeze and blog about it without legal beagles crawling out of the woodwork as soon as it happens. I can't seem to let my daughter start driving, moving is going to be another thing...good luck momma.

Let me know if you need any help info on NC. I'm helping my niece get situated in my area right now. I'm the queen of apartment info!

Can you reming me of which Granny square bag it is again? I say keep the daughters at home where they belong! EZ for me to say no I bet...

OOoooo - black plus all those yummy colors - it will be smashing!

Love the photos of the stacked up squares. I love the colors and the yarn and the stitches.