knitorious
Home Archives Profile
Continuing with the randomness on Tuesday

The morning isn't even half-over and already the neck of my shirt is looking stretched out.  I disturbed some harmless but annoying bugs when I opened the door to the garage this morning and it felt like at least one may have flown right down my shirt.  I had my arms full with lunch, tote, shopping bag containing walking shoes, mug o' coffee two-thirds full as well as travel mug, and still managed a bug-checking yank on the neck of my shirt.  I didn't see a bug.  Whilst zooming down the highway, going with the flow -- anywhere from 5-15 mph over the posted speed limit -- I felt a little flutter here, another over there; I tugged down on the neckline, ripped out a tucked-in side.  I still didn't see a bug.  That's the way it's gone this morning, rinse and repeat -- in the car, at my desk, it matters not.  I still think I feel a bug... still haven't seen a bug. 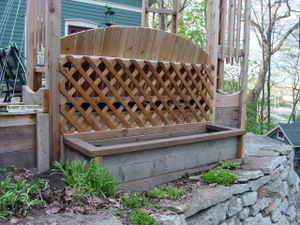 It's going to be a long day.

There are peas in the pergola and soon there will be beans in the pergola, too.  I need to check my seed packets and get a little more soil.  I still want a clematis and need a few potted plants.

The weekend was nice.  My sister Karen and her two boys came on Friday night.  We're both getting old (I'm sure glad it isn't just me!).  I'd have been fast asleep if I hadn't waited up for her, until all of 10:30.  Once upon a time, we thought nothing of staying up until 2:00, 3:00 a.m. -- once, we were still up when husband got up to go fishing!  Time would fly as we smoked and chatted, stitched and quilted.  We were in bed well before midnight on Saturday night, too.  ; )

Annie brought Mack on Saturday afternoon.  He's amazing -- you wouldn't believe how much he talks and the things he can say.  Karen's youngest son just turned 10 and he's had a love affair with Mack since the day they met -- they were inseparable all weekend.  Sharon arrived on Sunday morning, as did my SIL, Judy; Michael has been fishing with Dad -- who is visiting for about another week and who will be on my very doorstep next weekend.  I'm hoping for good weather and another pergola party.

Back to yesterday... we had brunch at Mom's.  I picked her a big bouquet of lilacs from my bush and Annie fluffed out the vase with some of Mom's own wildflowers.  (I don't know how it happened, but I forgot my camera.)  I made quiche again -- one bacon and cheese, the other with the addition of spinach and mushrooms.  I was going to make artichokes french again, but ran out of time!  And I also wanted to make La Bete Noir as posted and linked by Nova a few weeks ago -- a saved and drooled-over post on my Bloglines list.  ; )  I think I still shall...  We had Annie's fabulous blueberry muffins, a salad of fresh fruit, some wonderful cheeses and crackers.  It was a really nice time.

Alison was home most of the weekend, her car filled to the brim with everything from her dorm -- she needed to be out of the dorm on Friday, but couldn't move into the apartment she's sharing until late Sunday.  She made a remark on her way out the door on Saturday -- I can't even remember exactly what it was, but I knew it was an opportunity waiting to be seized (they've been so rare with her, but I think that's changing) -- so in a heartbeat, I followed her and questioned her, and we ended up having one of those really great, meaningful, three-minute, I'm-on-my-way-out-the-door, heart-to-heart conversations you have with a fresh 20-year-old.

She said that she didn't think she was going to move to Seattle or North Carolina after all.  I pressed her, of course, and there were many reasons why, but what made the sun come out inside my heart was when she said that she realized it's been all about BF and what/where he wants, his happiness, and not so much about her wants and needs and happiness; that she doesn't want to be someplace she may not otherwise go simply because of him -- what if he decides, all of a sudden, that he doesn't want to be there (his flippiness has been among my biggest concerns); because he's been away for a few weeks now and she doesn't really miss him all that much -- not like she should if she's moving across the country with him.

So now, we're back to the plan I think we last had at Easter... she's moved into an apartment for the summer with a friend, will continue working, probably transfer up here in the fall, live at home for a while, save money, go to school (a completely different program).  I told her, of course, that she still should go someplace, but there are many options open to her, so many better reasons to pick a place and go.  I am elated that she's come to realize, on her own, that it's her happiness and what she wants that should be her most important consideration. This is the kind of stuff that a mother -- that no one -- can teach or tell.  Yeah, so it was a Happy Mother's Day.

I have finally found FAGE yogurt in the 'hood.

There was precious little handwork all weekend -- I've been crocheting the band for the bag, making a very sore spot on my right-hand ring finger and my hands feeling raw from the cotton.  There's something about the crocheting of that band that is so different from the squares -- I cannot wait 'til it's finished (I'm about 2/3).  I like the crocheting, have even been thinking of some other projects, but I really miss knitting.

Sounds like you had a full and fabulous weekend.
I hope we get to see your bag soon, so we can see what you are going to knit next.

Sounds like a great Mother's Day! Good for your Alison on figuring some things out early on; might save some heartache later.

I bought the Interweave Crochet Magazine to make that bag, but you know, I really don't crochet! I will have to learn. And yes, you must make the cake Vicki, you must!!

Awww, " The sun came out in your heart". Now that's something every mom can treasure when it happens. Seems Alison has a great head on her shoulders (and she can use it too!) Well done mom :)

Here's a thought....why can't we just do the band in garter stitch then use sc to join it to the square panels? It would take less yarn and go a little faster.

glad to read about your conversation...:) Happy days!

congrats about ali. you have a really smart, independent young woman. mother's days (or any day, for that matter) don't get much better than that.

What a smart, well-adjusted woman you raised! This post also made me treasure my rare visits with my sister, when we stay up late knitting (me) and crocheting (her) and chatting. Maybe next time we can make that cake -- I've been eyeing it too. :)

This JUST came up for me on bloglines. You raised one smart chicky there my friend. The apple DOES NOT fall far from the tree.

What IS the problem with Bloglines? How wonderful that your daughter realizes her needs and wants are important! It took me awhile to learn that lesson. You're a good mother hen.

You raised her well! Belated Happy Mother's Day to you.

It is great to hear that your daughter has realized that her needs and wants are just as important as the boyfriend's. He obviously does seem too concerned about her wants and needs. Hopefully this is a sign of her growing up.

I started reading your site about three hours ago and got all distracted with your link to the Black Beast cake - god that looks delicious and I have it high on my to make list. Anyway, so glad to hear about your heart to heart and the new plan that seems much better than the old plan! I can completely relate to your sentence about those three minute heart to hearts. We have to take 'em where we can get 'em!

I liked your story about Alison, as a young mom to a 5 month old, I have yet to experience that kind of situation with Robby, but it's nice to know that there are smart young women out there making good decisions! I don't think I was one of them at age 20 ;) That cake looks incredible, I normally don't bake, but I may have to break that rule with this recipe!