I was surprised this morning when one of the "underwires" in my bra snapped, revealing its true nature as something more like "underplastic."  The "underwhatever" does actually do something and when one is broken, there's a difference.

It's just the normal noises in here.  Look!  More flowers!! 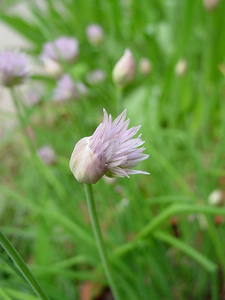 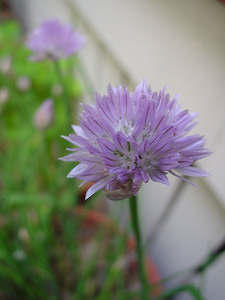 Chives.  What's your favorite thing to do with chives? 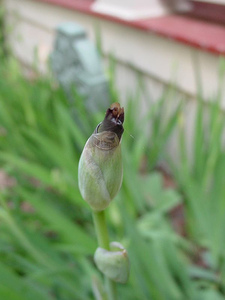 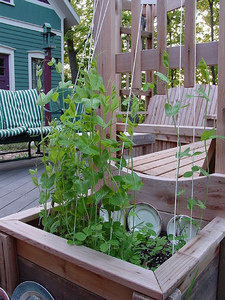 I'll soon have a showy iris -- a lovely, dark purple with parchment white -- I'm pretty sure this is one of the antique-y ones we inherited with the house; they make me think of dusting powder, rouge pots, rose water, arsenic and old lace.  The sugar snap peas still have a ways to grow, but my, how they've taken off!

I had a busy day yesterday, with lots of running here and there -- some planned, some not, including an emergency (unplanned) mission to give one of Maddy's friends a lift from school in the middle of the day.  After that -- and a stop at Mom's (semi-planned), DH and I grabbed some lunch out (unplanned) on the way to the home improvement store (planned) where we looked at metal roofing.  Our big, wrap-around back porch needs a new roof this summer.  This will mean tearing off all of the existing layers before applying new.  After a stop at the hardware store (unplanned) to see if they had a tool thingy that DH had lost and the other place didn't have, I stopped at a hair salon (unplanned) that I sometimes patronize to see if anyone was free to cut my hair.  They had an opening an hour later and I had at least 4 inches whacked off (exact length of whack job, previously contemplated but in essence unplanned) (it now just grazes my shoulders) plus a slight bit of layering and some thinning.  I can still get it in a ponytail (the biggest priority in my hairstyle choices of the past decade).

While I definitely do have a baby to knit for (niece/nephew due in August), Deb's idea behind The "24" Baby Knitting Shower is just too funny and clever to resist.  We'll soon be heading up north for a few days of listening to the quiet (not this weekend -- that would not be quiet), and I've been thinking about what to bring -- hopefully, I'll have a finished bag that's Larger Than Life in which to tote my project(s), so I'll need something new -- well, I have some old stuff to bring... but I'll still need something new -- and I'm thinking "baby."  Specifically, I'm thinking Kipling by Kim K., which I discovered through Ravelry* and have in my queue, and I have enough Mission Falls yarn for at least two -- one for "my" baby and one for "Chloe's."

*Improvements and streamlining of features are happening every single day and it will be worth the wait.  They're getting there... to a point where it won't self-destruct once the gates are thrown wide open, anyway.

I love your hair - and the saucy picture makes it look even more darling. And thanks for the "pub". Between your readers and Chaos and Chris' readers who knows where we'll go! Can't wait to see the bag. I've got one square left but am contemplating re-doing a few that were "early adapters" and might be too small now.

Very nice - much cooler for summer too, I'd bet. I think I may have even a little more off the top, so to speak, next week!

The importance of a pony tail should never be overlooked. I'm slowly trying to regain mine back.

So - a tin roof project....sounds cool

I love your chive photos and your new haircut. That baby sweater pattern is adorable, too.

I so had the underwire failure a couple of weeks ago-while at work.

When your support system fails, it's always time to call it a day!

That baby sweater is CUTE.

I love chives on a cheese and tomato pizza;-)
Love the pix of your growing garden. And the haircut is darn cute!

I like to sprinkle chive petals on a salad. Pretty and unexpected and tasty. And fresh chopped chives atop potato salad -- a true summer dish. The peas-and-pergola look great!

One day the little plastic ring that holds my bra strap broke, so I made a new ring with a piece of yarn. It felted/fused together nicely when I washed it, and is still holding up. :)

I love chives in everything.. scrambled eggs, baked potatoes, macaroni or potato salad.. just about everything!
The hair cut looks nice btw! Oh.. and as everything grows in.. lets see some pergola pics with lots of vegetation! I've been waiting and waiting to see how it would look this summer!

Ooh nice hair, I really need to get mine all chopped but the french hairstylists scare me...a lot...as much as the french dentist.

I like to eat chives straight from the garden. But my mom always complains of my chive breath when I do. *sigh*