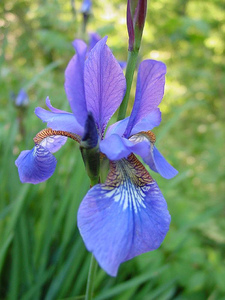 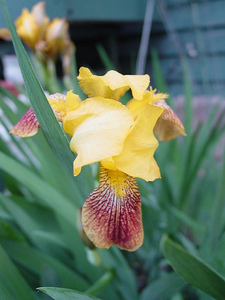 We probably have a half-dozen different varieties of iris -- most came with the house and some we were given.  I don't think we've ever purchased any, at least not from a nursery.  I can't pick a favorite -- there are things I like about each one -- it's the daintiness of the blue flag, the veined maroon and golden yellow color combo of the other. 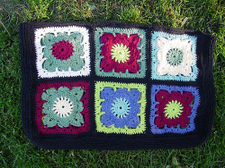 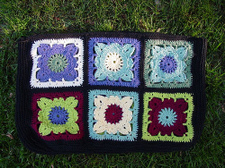 Except for weaving in some ends, I've finished the crocheting/knitting portion of the Larger Than Life Bag! 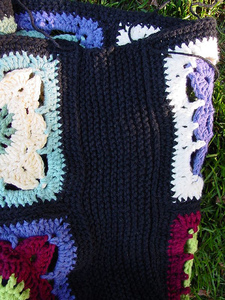 I made the garter stitch gusset just over three inches wide -- the squares are roughly six inches each and I liked that proportion; I thought that four would be too wide.

Because of the way I picked up the stitches on the first side -- from the wrong side so that the single crochet stitch made a little ridge (or corner) -- the only way I could think to join the two and have the same ridge stitch/corner was to also pick up stitches along the second side, and then three-needle it all together.  I did one side at a time, as I was flyin' a little bit blind, but it was worth the fiddlin' (and a little bit of rippin') because I love how it turned out.

I'll be able to fire up the sewing machine!  My goal for this four-day weekend, at minimum, is to have this bag all finished!!

I really like how you've combined all those colors. It's going to be quite a nice bag.

Vicki, first, I love your irises - we have none! And the bag, goodness, it almost makes me want to learn crochet! Good job!

It looks great! The knitting especially. ;-)
Can't wait to see it all finished! Have a great weekend!

Ohhh, I love Iris, I just planted a new bed of them, I have no idea what the colors will be till next year! The colors on your bag look like iris.Nice.

The bag looks terrific - I can't wait to see the lining!

The bag is gorgeous, Vicki!

I lost all of my irises in the last two years to iris borer. They are so beautiful, aren't they? Your bag is perfect,Vicki...I've been wondering if I want to do the sides. I can't decide!

I lost all of my irises in the last two years to iris borer. They are so beautiful, aren't they? Your bag is perfect,Vicki...I've been wondering if I want to do the sides. I can't decide!

Vicki, your bag looks fantastic! I have decided to wait until you are finished to start sewing my lining - I want to hear what you have to say about the process!

btw - I love your new haircut too!

I'm so excited to see it! Just a few steps behind but the sewing will set me back...

I'm lovin' your bag already! Irises photograph so beautifully, too, don't they? That's another one of their charms.

Both your iris and your bag are fabulous. I love how spectacular and voluptuous iris are. I wish I took better care of mine. They need transplanting to a sunnier site.