With a little help...

I had a great day with Ali yesterday.  I delivered her vanity and a few other things, and saw her apartment (she has a nice, big room), and then we dropped off her car for new tires and went out to lunch -- her choice.  First, we made a stop at Radio Shack -- I needed a new battery for my cordless phone (ack, it cut me off during a conversation with DAD the other day) and a headset so I can knit or crochet ... knit or crochet while I talk on the phone!

After lunch, we skipped over to a nearby Goodwill where I scored an old Steve Martin album and a book, and Ali found a couple of pairs of pants for work and a few little things for the apartment (cleaning stuff!).  Hancock Fabrics was also close and I was so happy to have an able assistant to choose fabric for lining my Larger Than Life Bag! 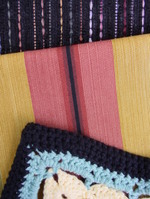 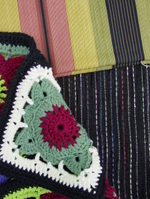 I didn't have the bag with me for color matching and I didn't have the pattern for yardage requirements (so my yardage is... um, let's say... very healthy), and thank goodness for Ali and her artist's eye.  I think she's only seen these squares a few times on the blog!  I was not so sure about these choices and I kept asking, "Are you sure this wouldn't be better?  How about this?"  She was nice, but firm, replying, "THAT??  In THOSE colors?" in a way that came through loud a clear, and was later rewarded with some flannel-backed vinyl tablecloth stuff that caught her eye.

We picked up Ali's car and it's insane how happy we were about new tires.  I'd been talking with a nice guy at the tire place on the phone a few times -- checking options, making the appointment -- and he happened to be the one to handle our paperwork in the end.  Turned out he was young and cute and I think my daughter knocked his socks off -- well, actually, she left him speechless.  I swear.  He was telling us something terribly important (I'm sure) about the tires, blahblahblah, looked at Ali and totally lost it -- admitted that he couldn't remember what he was saying!  Too funny.  I love this stuff -- life is never dull.

Ali zipped off to work and I had a few minutes to spare before I had to pick up Maddy -- not enough to first go home -- so I did the only thing I could do and made a stop at Iris, my LYS.  I picked up a few skeins of worsted -- some 220 and Lamb's Pride to go with the Galway -- to work out the HEX, and I chatted with the owner.  She told me about a Master Knitter Interest Group they're starting and this might be It.  I recently read about Marlene's fabulous success in passing Level I on the first go -- and this has just been on my mind almost since I began blogging.

I'm glad y'all see the humor in the words we pick up and use -- even at a young age, even when we don't really know what we're saying, even when those words really aren't part of everyday language.  Honestly, my sister and her family do not F-this and F-that all the time, nor do I, but kids just seem to pick up on all that stuff that's bad in no time -- like cussing and candy!  There were some caramels on the table the other day -- Mack had never seen them before, but somehow he just knew... "I want that!"

I've got level 1 that I pick up and work on periodically. I'm sure I'd get more accomplished on it if I could watch your progress (hint, hint). :)

Hopefully the mechanic is single and not too far away. Good luck with the master knitter program.

Sounds like you and Ali had a fun day. I would have loved to have seen the tire guy lose his train of thought!

I love those fabrics!! Ali did a great job helping you choose. Sounds like a perfect mother-daughter day.

Yes, the fabric is perfect!

I have been thinking about the Masters program a lot lately too. See I signed up last July, made 3 measley swatches, and haven't looked at it since. I am running out of time. Ack. They changed the program some since I got my package, so if I don't make the deadline, I have to resend for the new instructions.

I like the fabric, your daughter has a good eye! Bloglines delayed the last post. Very funny!

The fabric is fab! Saw your comment about knittting the edge of the bag and remembered the Messenger Bag from Folk Bags that I started about 2 years ago. It starts with knitting 74" of seed stitch for the edge and handle. I gave up at 22". I may re-think it for this bag though if the crochet becomes too tedious.

Oooh, I can't wait to see your bag finished. Such a tempting project. Must. Resist. The Hook.

Thanks for the link to Marlene. I need to pick up my Masters and keep plugging away at it. Her posts look very helpful.

I hope this comment gets thru...Sounds like a great day and Ali does have a flair for color:) I can't wait to see this all done! Little kids just say the darndest things and at just the right times too;)

Sounds like a wonderful day!
Mack sounds smart, too. Bet he loves Chihuly when he sees that! or Kureyon! or Blintzes. And the world might be a better place if we could stop freaking out over the occasional f-bomb or politically incorrect remark.

Ooh, pretty fabrics, well done, sounds like you had a great day with Ali. My friend and I were recently walking about 5ft behind my oldest son who was completely oblivous to some girls almost falling over themselves looking at him, so funny!

I love your bag. I don't even crochet but bought the magazine because I'm so intrigued with everyone's joy in it. I hope I am at least 5% as successful as you are. It's gorgeous!

Okay, that's it! I'm finishing my bag before the end of the weekend! It's very cool, Vick! The fabric is perfect!