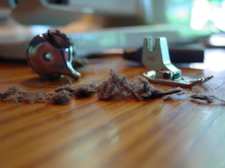 If you've never cleaned or oiled your sewing machine yourself -- never gave a thought to cleaning or oiling except when it's suggested by the guy at the sewing machine shop when it's taken in for repair -- do it.  My machine is not used that much, and it's been several years since it was in for repair/cleaning/oiling, and I can't believe how much dusty, dirty lint was packed in around the feed dogs after I removed the plate!  The machine came with a couple of small screwdrivers, but I've long since lost the brush (not because of over-use), so I borrowed a couple of DH's stiffer paintbrushes.  I bought sewing machine oil (cheap, cheap, cheap compared to the repair/cleaning/oiling!) the last time I was at Hancock's... and I must admit, I've had my machine for over 20 years and I never knew that those three small plastic holey things on the top of the machine were actually oil ports.  It was all right there in the manual.  I also "checked under the hood" and oiled the specified points in there, too.  Thank you, Julia, for the tips! 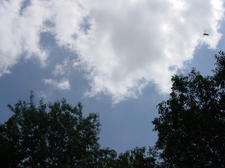 Have you joined Sandy's Saturday Sky Flickr group yet?  If you're Ravel-rousing -- or anticipate getting your Ravelry invite soon -- then you've no doubt got a Flickr account, so why not add a "Saturday Sky" set while you're at it?  This afternoon, I was... Doo doo doo, Lookin' out my back door!

I caught a bug in this photo -- just coming into the frame on the right.  I didn't even see it 'til I got it up on the computer.  The camera was set on "Burst 3," so it took three photos, one right after the other -- this is the first of the three and the only one with the fast-traveling bug.

It was a gorgeous day here -- simply gorgeous.  We did not go to Algoma, but instead to the farmers' market with a few other stops here and there.  Mom wasn't able to go, but we picked up some strawberries and radishes for her.  We grilled hamburgers (from grass-fed cows) and fresh zucchini and dined al fresco in the pergola tonight.  Yum. 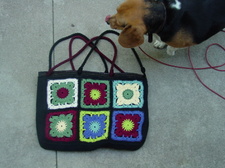 One reason for the al fresco dining is because the sewing machine is set up on the dining table.  I am all but finished with the Larger Than Life Bag!  I broke a couple of needles before I was completely finished, though, and I don't have any heavy-duty ones left, so it's going to have to wait.  In the end, I did not apply anything to the lightweight fabric because what I had was not iron-on, as I thought (or I screwed up, whatever) and because of that, I didn't add any pockets or anything.  I totally stole Margene's drapery tie-back idea.  I bought four -- two maroon and two black -- there's one of each color on each side and I'm sewing them so that there will be as much support for the bag as possible.  Since I made it in cotton rather than wool, it's a bit heavy.  ; )  I'll post the low-down when I'm completely finished... shouldn't be long now.

Yay, Vicki! Glad you got thru the oiling thing - it's really such an easy thing to do. Sometimes a can of air like you use on computers is handy for blowing out lint too. The bag looks great and that drapery tie-back idea it killer - they have those things on sale at Hancocks or Hobby Lobby all the time.

The bag is looking pretty cool. Oiling a sewing machine regularly is a good idea as you've found. I find it interesting how much lint and thread can get buried under the plate in a short time. But I'm odd that way. *g*

I would break the freakin thing cleaning it

Your bag is gorgeous, I too use a paintbrush to clean out my machine and serger, I like having a longer handle.

Larger than Life, that bag is! Your scaring me with all the sewing talk though. Although I did sew a button on my pants yesterday.

And I didn't know you had a beagle! Too cute!

Burgers outside sounds heavenly. We ate outside last night, too, and it was wonderful. Love the bag!

I'm going to oil my machine before I use it (it's still on the dining room table) or put it away! Thanks for the reminder. Your bag is looking great! You're going to enjoy it.

I NEED to make that bag!!!! You've got me going now. How did the cotton turn out for you?

LTL is looking good!! I have to remake the lining - AGAIN - because I made my bag in cotton. This thing may never get done!!

Ugh, hanks for the reminder -- must clean and oil my machine. But your Larger than Life looks fantastic! Can't wait for the FO run-down.

Ooo, I really need to do the oiling thing! Thanks for the reminder!