By the light of an overcast morn 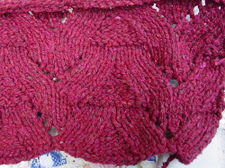 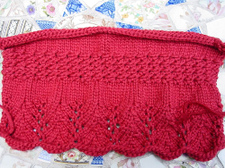 That's Rowan Summer Tweed worked in the "Double Wing, Openwork Version," and the mish-mash swatch (with "Vine Lace" and "Pebble Stitch") in Ultra Silk that I mentioned yesterday. At right, the two, unblocked "Double Wing" swatches -- interesting in that they're both worked over the same number of stitches on the same size needle -- the Summer Tweed version does have two extra rows (between the second and third repeats -- I just wanted to see what would happen).  These yarns are quite different and it's fun to play around with them.  The Ultra Silk feels wonderful -- it's so soft and drapes nicely, and it's got some spring -- it'll be interesting to see how this swatch blocks and behaves.  The Summer Tweed, on the other hand, has no spring at all!

I don't think the Ultra Silk is shown to best advantage in a small, all-over textured pattern such as "Pebble Stitch," either.  I like it in the two other patterns, and I'll bet cables would really pop!

That's what I've been playing around with on the needles. 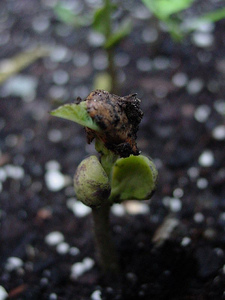 Beans are sprouting already!  You know what comes to mind when I see a bean sprouting like that?  Milk cartons -- the windowsills in our classroom (anywhere from kindergarten to third or fourth grade) jam-packed with 'em -- hoping and praying that there would be germination by the time it was Mother's Day!

I got out and took these pics in the nick of time because -- ugh -- it's raining again!

What Carole said! LOL
Summer Tweed doesn't have any give, BUT it will grow when you wash it...a lot!
You always evoke the best childhood memories!

So there is this really great sock pattern, I think it's called "Monkey," I think you might like it... :) I am with Carole. The swatches are pretty great though!

Swatching is even more fun the actual knitting sometimes. We have no milk carton beans this year - sad!

Bean beans good for your heart...See what happens when you speak of childhood things? The swatches are lovely; red and lovely!

your storms must just head my way.. we've had them all week, and today it was back to back thunderstorms with hail and power outages! Enough already, I've got flowers to plant! Love the Rowan Tweed, by the way. :)

Darn you! Your garden is always just one or two steps ahead of mine!