I's Feeling near as Faded as my jeans 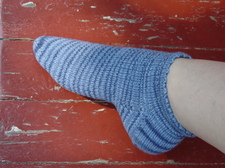 Here it is!  The First Freakin' Fabulous Fixation Footie c'est Fini!  The yarn is Cascade Fixation, the colorway is "denim" and it'a Fun, quick knit.  (Ahem.  Painting the back porch Floor is slated For later this summer.  It is neither Fun nor quick.)

I Finished it at Knit Night.  I turned it inside out to work the last Few rounds and then did a three-needle bind-off (rather than kitchener) For the big Finish.  I started the second sock and am at the crucial point where I'll Find out whether unzipping of the provisional cast-on For the picot cuff trick will -- or will not -- work. 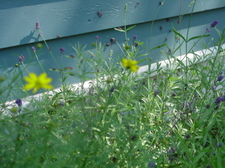 The threadleaf coreopsis is just beginning to bloom, as is the lavender.  It seems I've created a haven For the box elder bugs -- do you see them?  They are annoying but harmless, and there's not much I can do.  Spraying the trees is not an option, even without all the little brain Flags raised by those words -- there are just too many trees.  They are "weed trees."  The city put a moratorium on purposeful planting years ago, but it matters little.  The bugs are all outside now, but come Fall they'll want to join the ladybugs and move inside.  You know what the recommended method of control is?  The vacuum cleaner.

Can we talk about my movie queue For a minute?  I have Finally watched and sent Jean Brodie packing -- she having lingered here Far, Far, FAR past prime -- and I am expecting Strictly Ballroom to arrive at any minute -- that one on a long-ago reader recommendation, plus I miss Dancing With the Stars, I like Baz Luhrmann and I loved Moulin Rouge.  Alice Doesn't Live Here Anymore was to be next on the list, but a serious breach in my cultural awareness was discovered this morning and Alice has been bumped by Marlo Thomas -- and not That Girl.

There was a deafening silence on the phone when Cara & Ann learned that I'd never seen Free To Be... You and Me.  Ummmm, "deafening silence" is not a term that I would normally associate with Cara and/or Ann, especially not with Cara & Ann -- "deafening," maybe... "silence," never -- so I knew that this was serious.  Of course I am aware of the concept, the message, the phrase, the associations of Free To Be...  but I have never seen the show and would not recognize a single song -- in Fact, not a single note, even while being "serenaded" this morning in both ears...

In 1974, I was a sophomore in high school -- aware (in varying degrees, depending on the day) of Watergate and Richard Nixon, the energy crisis, Patty Hearst, and Phil Donahue -- I was not watching "kid shows" on TV.  I didn't dare mention After-School Specials and my sketchy recollection of those -- my sisters and brother maybe watched them -- but I do remember Where Did I Come From?

Heh, is it just ME?  Anyway, maybe I can get delivery to coincide with Mack's next visit and we can watch it together.

This post brought to you by the letter F, and the song in your head by Janis.  ; )

OMG....you three together in one post is dangerous! Box elder bugs..ick they're hatching all over our place. I'm going to be singing JJ all day;-) Nice ped!

My Dad based his whole child-rearing philosophy on Free to be You and Me. I was raised to be that kid. I loved that show and all the music from it.

The song still makes me cry...

Last fall we sprayed the cabin down with some stuff my dad picked up at the garden center and this spring there wasn't a single box elder bug or fake lady bug in the place - it was a first and it was fantastic.

Now I'm thinking I should've done that picot edging on the socks I started this weekend....to rip or not to rip?

I don't know what those box bugs are but they sound nasty. I'm trying to clear up an outburst of grain moths. Ugh!

I never saw it either. Will have to queue it, thanks:) I remember those events well too. The gas "shortage". ha! I love that sock and the color too!

I LOVED strictly ballroom. I should re-queue it, it's been a while. And I love the footie. A nice short cotton sock, now that is a brilliant idea for summer knitting.

You're mighty tasty too.

I remember having the 8 track of those songs for Free to be... I would dance around the house singing my heart out.

You 3 together, love to be a fly on the wall and hear that conversation.

Cute footie! Heh, thanks for the "Free to be you and me" flashback...