Don't look at me that way
Feelin' the love

1)  It was supposed to be Madeleine (a near-lifelong fan, see "first day of pre-K" photo at right) in the audience with her grandparents for last night's closing performance of The Lion King.  Instead, at the last minute, it was Madeleine in the audience with her big sister Kate and ME!  "Lucky us," is all I can say about that (and "Hope you're feeling better, Joe!").  What a fantastic show -- costumes, set, music.  Also like old friends -- Mufasa, Zazu, Rafiki, Simba and Nala, even Scar and his troupe -- to someone like me, with kids the same ages as mine.  And I know it's all about the lions, but I couldn't get enough of the giraffes.  Awesome.

2)  Katie said that she has served coffee to and chatted with Zazu and other members of the cast and crew during the show's six-week run in our area. 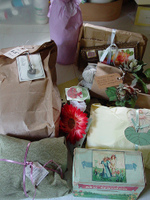 3) There were gifts in the mail late last week -- my Special Swap package from Lynne.  I knew my package was going to arrive early, on account of Lynne's big move, and I thought I'd just let it tantalize me for a couple of weeks, but then I saw all the Priority Mail stickers and figured that if the mailing was a priority then so, too, should be the opening.  Voila and surprise -- I have been swapped silly!  Don't worry, I'll share all the wonderfulness of Lynne and her knack for the gift -- you can get a sneak peek here -- but time's up for today.

Great to hear. We're going to see it in NC next month for my kid's 5th birthday. We have seats on the aisle. He's going to flip!

Great to hear. We're going to see it in NC next month for my kid's 5th birthday. We have seats on the aisle. He's going to flip!