When I signed on to post this morning, I saw that I'd done so 990 times in the 3+ years that I've been blogging, and that there have been 8,999 comments received on those posts.  That's an average of 9.08 comments per post -- whatever that means -- it's just that calculating an average has always been one of my favorite mathematical things, one of the few executions about which I feel confident.  While Margene awaits her 29,000th comment (say that three times fast!), the next one on this here blog will be number 9,000.  Have a cigar!

I'm afraid I've been boring of late.  Maybe even a whole lot.  I've been willy-nilly and inconsistent with the knitting -- there's no persistence, no purpose, no loyalty, no follow-through, no real big love.  The little "Fixies" are fun, but fleeting.  Master Knitting Level I swatches shall soon commence, but that's not going to be very exciting.  Maybe it's summer, maybe it's life.  I need to make some excitement!

It helps to find something beautiful.  I present, my first Friday's Flowers (as always, click for big). 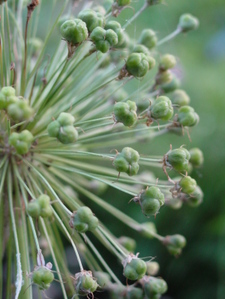 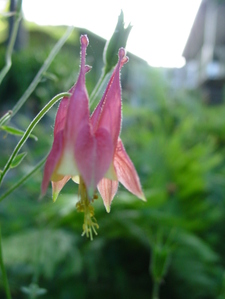 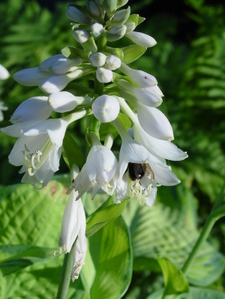 A couple of these are past their prime -- the allium, columbine -- but still so beautiful.  I lost my Pee Gee hydrangea tree a couple of years ago, and the Annabelles have good years and bad... this looks like a good year.  The arachnid in the hostas is a non-flroal bonus -- we've a history of arachnids in the hostas.  The pink star-shaped flower is atop the tall stalk of a succulent, and do you see the little bee butt in the hosta flower?  Actually it was a very big bumble bee and I'm amazed that I stuck around and managed a few shots -- I'm not so much with the big buzzing bugs, especially if they're associated in any way with stingers.  Boy, it sure seems early for the hostas to be blooming!

Here's the weekend plan (kind of a rinse and repeat from last weekend):

2)  Clean and oil my sewing machine.

3)  Finish the Larger Than Life Bag -- I can't believe I've let that sit for so long.

4)  Cut out (at least) and maybe sew the two other sewing projects on my list -- a batik top and a denim vest.  It would sure help if I didn't have to set up the sewing machine on the kitchen table.

DH mentioned that day-trip to Algoma he's had on his mind and I think it's going to be another glorious day tomorrow, so we'll see how the chips fall...

ETA:  When Norma wrote yesterday to say that she didn't know whether to blame Bloglines because she didn't see notification that I'd been posting or the fact that she's been so busy that she maybe didn't notice.  Almost always the optimist, willing to give a fair shake and benefit of the doubt, I wrote back and told her that I chose to believe it was maybe a little bit of both.  Well, Norma?  I know you're busy with depositions and weeds and all, but I think it's more Bloglines than you.  I don't know what the problem is... I suppose I should write and ask.  I try all different ways of saving drafts, posting into the future, the past, real-time -- or not.  It doesn't seem to make much difference lately.  I've never been much of a squeaky wheel, though -- there are times when I can squeak to beat the band -- maybe even the cicadas (DH brought a few specimens home from a trip to IL last weekend and he said they really WERE loud!) -- but there are other times, most times, when the self-doubt creeps in -- it creeps in everywhere! -- and confidence lags.  Yeah, for even the simplest thing like, "Hey, Bloglines, why aren't you updating me?"

Okay, I've copied that last line, now I'm going to go paste it into an email to Bloglines.

Those are gorgeous flowers, by the way.

You always have such beautiful pictures :)

I've picked up your feed most often through Google reader, but I don't check that as often as Bloglines. You are never boring...lack of knitting content doesn't mean boring.
My sewing machine is STILL on the kitchen table where I left after finishing my LTL Bag...I had good intentions. ;-)

Happy 9s! You, my dear, are anything but boring! Ever!! Have a great weekend - love the flowers.

Do I get to claim the cigar? :)
Fab flowers, especially the hostas - wish I could grow them and not feel that they're only going to get eaten by slugs / snails!

Isn't what grows in your garden just so inspiring? The colours, the shapes...

And YUP, I came here despite the fact that you were not lit up on Bloglines. Interesting, because I thought the rumors were true that if you put the word "Bloglines" in your post, their crawler (or whatever the hell) would THEN pick it up if it hadn't already, but I see you did that. Stupid free services, as Sandy said recently: When is there going to be a one of them that is worth the money? Huh?????? LOL

For me, you show up on Bloglines. I always read you. Stay well.

I love that pink columbine!

I'm seeing your updates in bloglines, but am having problems with other feeds. :(

I hit 15,000+ comments in the last week. Hard to believe! I have the same issues with bloglines but it usually does pick up my posts eventually. I see yours there every day.

I usually see your updates on Bloglines, though it sometimes says two are up when one is old.

The hosta flowers are lovely with their bell shape. Good luck with the sewing.

I wanted to add as well that I subscribe and read via Bloglines, and it regularly shows that you've updated.

Congratulations on your 9000 comments and almost 1000 posts!