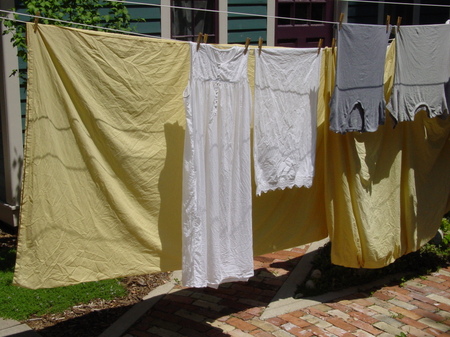 For the most part, the crocheted chain provisional cast-on worked for the picot edge this time and I'm already into the heel flap for the second Fixie (Fixation + footie).  The last half-dozen stitches (the first to be set free once I started to yank the chain) must have been knit into a side loop rather than the back loop -- I had to pull the crochet yarn through to free those knit stitches -- after that, though, it was just as advertised.  I freed each stitch, one-by-one, and knit it together with one on the needle.  Very slick.

I used the directions in The Knitter's Book of Finishing Techniques by Nancie M. Wiseman, but used a hook several sizes larger than my needle; I also found a wonderful online tutorial for many different cast-ons at Eunny's -- the one I used was the "Invisible Crochet Cast On II."

I like the one that you crochet onto a knitting needle best, because I can never figure out which loop to knit into, or which end to unzip otherwise.

So, no huge thunderstorms last night? We had GREAT big hail!

I love, love, love the crochet chain provisional cast on for my toe ups and for when I do a picot edge on a sock. Slick is a great word for it, very slick!

I tried the crocheted provisional cast on for the first time last night. I thought surely I must be stupid. I ripped out the toe this morning, I am going to use the Wiseman book and check out Eunny's tutorial, thanks for the link!

i love your washline pics!!

Oh, Vicki, I think Bloglines has been ignoring you....either that or I've just been too busy to notice you'd updated. It's possible. I love your clothesline. :)

I always love the pictures of the cotton nightgowns on the clothes line...reminds me of when I was little and my mother hanging out the laundry :-)

Your photo looks like the home-y essence of summer to me. I'll have to give the crochet cast-on a try, it sounds like a winner.