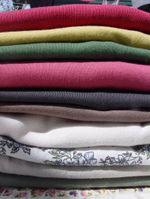 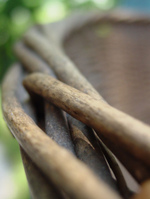 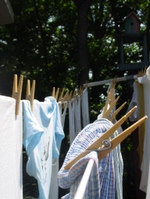 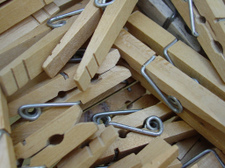 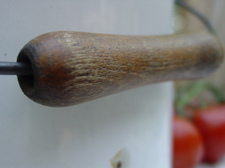 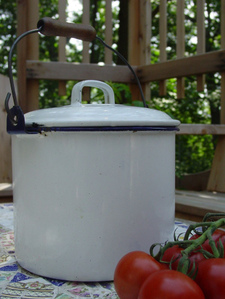 I was recently tagged for a meme that I may already have done, and I've been meaning to do another tag-less meme, so thought I'd join the two.  Can I do that?  Of course I can (and I don't have to be ordained or anything) because it's my blog!

There's The Green Meme, spotted at Carole's, Kristi's, Birdsong's, joining with The Random 8 Meme (which always makes me think of Crazy-8s, my favorite card game), for which I was tagged by Vicki, and I now pronounce you...

Green 1:  I used earnings from a rummage sale as seed money to purchase our high-efficiency, front-loading washer which was the talk of the multi-family sale that year!  Despite recently having to call the Maytag repairman, I've been pretty happy for -- wow, I don't know -- five or six years now?  Probably more.  I've also been doing laundry almost exclusively in cold water for at least the past six months.  Old habits die hard, though, and the whole Howard Hughes-germaphobe-dust mite-OCD-Monk thing needs to be squelched on a regular basis -- not to mention all that training in the use of harsh chemicals, rubber gloves and elbow grease by Mom over the years -- so I'll admit to a handful of "hots," always with a cold-water rinse, though, and there's not a warm in memory.

Random Crazy-1:  I folded laundry under the pergola recently and contemplated my pile of clothes.  I've been trying to work a little more color into the wardrobe; I could use more prints and patterns, don't you think?  I'd love to meet Stacy and Clint.  I'd love to have a makeover of any kind (especially hair).

Random Crazy-2:  I've been tuning in and warming up to The Closer -- actually, it's Brenda I've had to warm up to.  I totally get the sweet tooth, and I've been liking her more as I get to "know" her, but here's the scene from a recent episode that cinched it -- and now I'm well past warm.  Brenda is making mashed potatoes in a huge pot -- with a masher in each hand.  She uses a big spoon to serve some on a plate for her boyfriend, then takes the pot and spoon over to sit down at the table where she starts to eat those yummy, smooth, creamy mashed potatoes directly from the pot as if it were the most natural thing in the world!  Mmmmmm. I'll have mine with butter (no gravy).  And make 'em blue!

Green 3:  It's no secret how I feel about airing my laundry on the line, and I do it as often as I can.

Random Crazy-3:  Madeleine has made a number of bracelets for herself, her sisters and her friends, by joining the springy things from clothespins to make a "chain."  My clothespin supply has been left somewhat diminished.

Green 4:  We have and use a big compost bin, purchased several years ago from the county at a reasonable price.  Sometimes, I bypass the bin and just dump and spread coffee grounds straight, at the base of acid-loving plants such as rhodies, azaleas, hydrangeas.  I use the boiling hot water from cooking pasta to pour on the weeds growing in the sidewalk cracks; the water from cooking/steaming veggies, after it's cooled, to water outdoor plants.  That's a lesson learned from grandma.

Random Crazy-4:  I don't know that I'd compost as much as I do if I hadn't found the most adorable, covered, enamel berry pail to use as a compost bucket by my kitchen sink. It's so cute, it even makes the annual battle with the fruit flies worthwhile.

Green 5:  When I buy new, I try to buy as well as I can -- superior quality, longer life, and all that.  It doesn't bother me to spend more than the big-box price on a good quality, classic shirt in a nice color because I know it'll look nice and fit well even after I wash it (you know what I'm talking about when it gets all twisty and won't lay right), and will continue to do so for a long time -- sometimes years and years and years.  I've worn shirts for 20 years or more ('til there's nothing left!).  I have nightgowns that are older.  Similarly, if those good quality clothes can be had at the thrift store with a little life in 'em yet, well that's a no-brainer, now, isn't it?

Random Crazy-5:  Do you know how my beauty plan is similar to Ellen Barkin's?  We both use an eyelash curler!  (Ha!)  The only difference is that hers likely came from a department $tore, and mine from a discount store.  Also, we both shampoo only once or twice a week (she's more of a once-er and I'm more of a twice-er).  I've recently begun rinsing my hair with vinegar (the jury is still out) rather than conditioner -- it's supposed to aid in flakiness (as in there should be less on the scalp) and cutting soap residue which should result in more body and shine.

Green 6:  We have used canvas grocery bags for many years.  Our local Piggly Wiggly sells them for about $3.99 -- a wonderful style made of heavy canvas, shaped just like a paper sack with strong handles, silkscreened with their name/logo -- and gives us a 5c/bag credit every time we re-use them.  We have toted a lot more than groceries in those bags over the years, and we're most definitely "in the black." 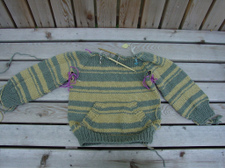 Random Crazy-6:  The Wee Wallaby is finished except for weaving in of 14,000 ends.  This is my first in-the-round raglan sweater and it's MAGICAL!  I didn't have enough yarn for a hood, so made a nice collar instead.  The intended recipient (Mack) has shown some interest and initiative in the area of potty training -- or perhaps more of a disinterest in the diaper, claiming that it's "bugging me."  He helped to pick out his new toddler bed, having given up the crib for the baby.  Awwww.  I finally found buttons for the baby's Saartje Bootees and I'd better get crackin' if they're to be the baby's first shoes!  Meanwhile, I've begun another Baby Surprise Jacket.  The kid knitting will continue just a bit longer, and then I'm casting on for Kent's Moss Stitch Beret which has moved up in the Ravelry queue (it may have been influenced by those eyes).  ; )

Green 7:  I have a growing awareness of where my food comes from, how it's grown and the distance it's traveled from farm to table.  I am also coming to terms with words and phrases such as sustainable, organic, healthy, CSA, free range, eat local and chemical- or pesticide-free -- and what they mean to my pocketbook.  I'm finding ways to reconcile; knowing I can't afford to be 100% anything (can't afford to be 100% healthy?), I am doing something and prioritizing.  I caught the tail end of The Endless Feast (106-Virginia) on Saturday.  A sumptuous meal prepared and served in that manner, sharing the bounty (and the wine) with all the people I love, is definitely an item on my list.

Random Crazy-7:  I did not go north last weekend.  I was hopeful, as evidenced by my last post, but in the end, I decided against being alone for days in the northwoods (where I have absolutely NO cell service) while in such a vulnerable (and painful) state.  Instead, I spent a very low-key weekend at home -- very near a pair of hands, ready and willing to massage tight muscles whenever needed.  Until I work out this one last crick and stand up straight, I kind of remind myself of my grandpa -- not really my best look.  But I am so much better.

Green 8:  There is lots of room for improvement and, for me, one of the biggest areas is lighting.  I have a couple of CFLs, but due to my intolerance for their poor quality (color) of light, they're relegated to areas that don't matter much or, in other words, areas that aren't used much and so nothing really is gained.  I know that this is a little thing with pretty big impact.  Thankfully, technology has changed with demand -- different shapes, some are dimmable, and improved color and I'm ready to try again.  The color temperature -- measured in degrees Kelvin -- is the most important number to me and I'll be looking for something in the daylight area, well over 2700K.  Any suggestions?  I am also hopeful that LED will be an even better solution for the future.

Random Crazy-8:  August is busy.  Dish Rag Tag begins tomorrow!  Ali starts a new, very, very part-time, supplemental job at the mall on the 9th.  I will have a new niece or nephew on that date, if not before, as well.  Katie moves to Madison on the 15th!  Maddy registers for school that week.  I might be registering for school, too.  Ali starts her new coffee shop gig (a transfer) on the 20th, and will be moving home sometime during the month -- either all at once on a particular day that is yet undeclared, or slowly (possibly taking weeks, though I can't imagine because she doesn't have all that much to move!).  At some point, I'll need to spend a long weekend with the new baby and his/her big brothers.  ; )

I love the way you combined these two lists! And I do the same thing with boiling water from cooking pasta, etc.

Great list, by the way! Just makes me miss you though.

Wow, you are busy!!! I love old wicker baskets too. Glad things are hoppin over your way.

I used to do the vinegar rinse too - although at the time I was totally and naturally a brunette and used apple cider vinegar.

Now this is a way to do a meme (or multiple). I have to say, I love that Brenda too. The snappy quips and her southern accent remind me of home. And really, there isn't much else on, right?

Wow - excellent green ideas. Hadn't thought to use boiling water on the weeds, and boy can we use it! Always glad to hear that there is another Green Gal out there. I feel the same about CFLs, but my husband gave me such a guilt trip that I've given in. I remain hopeful that LEDs will be out soon to save me.

I love my new clothesline (partly inspired by yours!) and we tote everything around in our canvas bags too. And that scene in The Closer? Hubbo looked at me and said "Look familiar?" :)

Wow - so much to learn about the Vicki we thought we knew!. I LOVE Brenda Leigh Johnson. "Thank yew. Thank yew very much". The scene with th mashed potatos had me in stitches. I've done that many times!

When my daughter wanted to dye her hair green we found that wetting your hair with vinegar and then combing green food color on your hair worked the best for keeping the green from washing out. It was bright green for a couple of weeks and then faded to a lovely chartruese.

Should I nominate you for What Not to Wear? Warning...they will not go for Pajama Day...or wearing all of those pretty nightgowns on Sundays!

Wow! You are one green woman!

Great list and glad to hear your back is getting better. You inspired me to use that boiled water tip. Even though pasta is such a rarity in my house now (no fun because I love it) I'll try to remember that. BUT, I do steam loads and loads of veggies. Thanks so much for that fab idea!